Correspondence of the Enterprise .

The greatest of all American National days was celebrated here in properly glorious style day before yesterday. We had the conventional procession, oration, poem, reading of the Declaration, music by the band, benediction, etc. -- same as they did in thousands of other communities throughout the Republic. Yet our procession differed from all others in that our Car of State was a genuine railroad car, drawn by a locomotive. This style of team, named "Mules' Relief," is special and peculiar to Austin. It also hauled another car filled with children and people of all sizes and ages, and the decorations were elaborately fine and tasteful. The Car of State, with its crowd of little girls, ranged in seats one above another, and all dressed in white with red and blue sashes and ribbons and each waving a gay little flag, reminded one of a grand, lovely bouquet of rosebuds, surmounted by a sweetly, blooming young rose, representing the Goddess of Liberty. And it was a real, live, human, happy bouquet, representing the home paradise of earth as well as the kingdom of heaven. I sometimes wonder if each succeeding generation of little girls is really prettier than the last, and, anyhow, feel disinclined to consider even the possibility that this huge car-load of sweet, pretty little misses can ever grow up to be wrinkled, snuffy-nosed, vinegar-faced matrons, or vicious, snaggle-toothed old mothers-in-law. Manhattan Hose Company had a duplicate goddess, and the boys, in their neat uniform, marched like a guard of honor, and as festively proud as did the numerous gay companies of the old Virginia and Gold Hill Volunteer Fire Departments in the blooming and booming days, when the Comstock goose hung high and nobody cared a dern for expense. They used to run half a dozen or more goddesses sometimes. We are noways short of goddesses here, but comparatively short of companies to parade them.

Owing to the strategy of Lieutenant Governor Laughton in getting our time-honored big cannon away for exhibition in Carson, the little gun cast at the Manhattan foundry had to do the national saluting on this occasion. It is of the bull-fyste order, little, but willing, and the artillery boys running it fed powder into it by the hatfull, then got out of the way and pulled the string. After each discharge they had to hunt up the gun, but they managed to keep it bouncing pretty regularly while each salute lasted. Of course everybody stuck up their flags. In fact I think there were about seven flags displayed for every man, woman and child in Austin. Ranchers, with wives and families, were in from the surrounding country, and the Piutes had on their best holiday rig. But this kind of a celebration does not suit our hungry Piute citizens half so well as a barbecue or a high-toned Chinese funeral. Professor Bristow's oration was a most worthy effort, and Mrs. Vollmer read Longfellow's poem, "America," very acceptably. Hon. H. T. Creswell read the Declaration just as well as anybody can, and all who knew it was not his own original production encouragingly applauded him as he waded through his laborious task. The band and the military did themselves and the occasion high honor, and we all feel justly proud of them. It is seldom that a celebration passes off anywhere as smoothly and satisfactorily .

Lander Post, of the Grand Army of the Republic, showed interestingly in the procession, but not strong in point of numbers, like the Reese River Pioneers. The ball of the Pioneers in the evening was very well attended, but almost entirely by comparatively juvenile people. Thanks to a complimentary invitation from the society, I was present for a time, but had to quit because so few could come up to my style of dancing. Even the old veteran, John Frost, although the chief in the manipulation of mining pumps, is just nowhere in dancing pumps.

Laid down his pick and was "on top" that day. All the miners, of whatever nationality, that could be spared, had a holiday, and with their imposing numbers and honest substantial appearance formed a materially interesting feature of the procession. And Cousin Jack entered into the spirit of the occasion as enthusiastically as any native born citizen. Said he: "You see the old country was obliged to separate from the new, because ee was gettin' to big for 'er. Good thing 'nuff for both of 'em; 'ooray for the Queen and the Heagle hennyow. Coom in 'ere old son, thee'll be called on for a song next. Just look at the bunch 'o Gold 'Illers 'round the table in the corner - Old man Luke, Billy Benny, Simmons, Bawden, George Laity and Joppa Bennetts - 'Eres to the lads; 'eres to the old Comstock; 'ooray for the Fourth!" Cousin Jack's rich voice rolled forth in melodious chorus, responsively to many a "worthy call," during the last two evenings, but to-day being Sunday, he considers the celebration over, and will go to work with all hands as usual to-morrow.

Harry Bluett, formerly well-known on the Comstock, returned to Austin the other day, from a six months' visit to the Wood River country. He talks as if he was glad to get back, though he says he had a pretty good time and saw lots of good people, found many old Nevada friends and was well treated generally. The Minnie Moore mine at Bellevue and the Elkhorn and Parker mines at Ketchum were the best mines he saw to support those towns, and Hailey seemed to derive its chief importance and support from being the county seat of Alturas county. He does not, in fact, seem deeply impressed with the present and future prospects of the Wood River section. He saw also hundreds of returning prospectors from the Coeur d'Alene. they were all on foot, and sore footed at that, packing their blankets and glad to get somewhere. They were unanimous in denouncing Coeur d'Alene as a pretty tough humbug. The only returning traveler from there who had any good word to say for the country and the mines was a Chicago drummer who retained money enough to pay railroad fare instead of walking like the rest. Harry has concluded to send for his wife and make his permanent home in Austin.

All weather indications go to show that a big old time cloudburst may be looked for most any day during the next two or three months.

If John Mackay wants to be the next United States Senator for Nevada, he will be, if not, you have another man in the western part of the State who is well deserving and capable, and can be Senator if he likes. 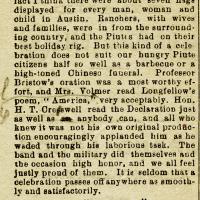