The Long continued and copiously rainy season had the effect to finally flood Reese River Valley fearfully and wash away an extensive section of the railroad, cutting off our mail, passenger and freight facilities for several days. In fact had it not been for the telegraph we would have been totally cut off from all communication with the outside world. During the last four or five days some real stern hot Summer weather has set in, accompanied by a sudden drought, there being no rain for two days, and causing the river to drop on itself so that the railroad could be mended and trains run over it again. Day before yesterday about a dozen cars got through from Battle Mountain with freight, the first for about two weeks. This sudden drought and hot weather created a very lively demand for beer and other cooling irrigants. The amount of such beverage required to keep the old Reese River pioneer's clay properly moistened is astonishing. Yesterday and day before we had some light thunder showers in the afternoon, and this afternoon a cloudburst is confidently anticipated.

The entire Democracy of Austin, from Coffee to Creseenzo are bowed down in the sackcloth and ashes of disgust and demoralization, since the absolute refusal of old Sammy Tilden to be nominated and elected President. They staked their whole political pile on him at their recent State Convention here, enthusiastically swearing eternal fealty to him dead or alive. They declared that he was swindled out of his election eight years ago by an eight to seven fraud, and that he must now be vindicated by a grand unanimous re-election. The Democracy apologize for their neglect to thus vindicate him four years ago on the ground that he refused to have it. He did not really believe he was fairly elected four years ago, neither did they. Then affecting to believe so now is merely a measure of popular Democratic enthusiasm through which they hoped to win. "Whom the gods would destroy they first made mad," and our Democratic friends in this convention did so many mad things and made such mad blunders, that they have been mad ever since and willing to be destroyed. The worst blunder was the snubbing of Senator Fair. When he was placed in nomination as delegate to the National Convention at Chicago, a friend arose and expressed an earnest hope that this convention would not make the same blunder that the Republicans had in similarly rejecting two of their best men, Mackay and Jones, by refusing to send them to Chicago. But they deliberately and cold-bloodedly did snub our Uncle Jeems, on the ground that he was not a Tilden man, and now that Tilden has declined they are madder than ever to know that they slaughtered Fair, and destroyed all future chances at his plethoric sack, all to no purpose whatever.

Last Friday evening Fred. O'Brien married Miss Mary Crosswhite, of this town. Fred. was formerly a good Comstocker, and played the tuba, or mammoth Ramshorn, in Rippingham's brass band. He plays the same in our excellent local band, and, being a first-class musician as well as a first-rate fellow generally, he has plenty of good friends. About fifty ladies and gentlemen were present at the wedding, and the band came and serenaded; and there was lots of good singing and good things to eat and drink, and everybody went home happy. His brother musicians all wish his married live may be one long harmonious tune, with happy variations and no discords.

This is a name given by our miners to the poorest class of their ore. Those working on tribute, especially, sort their ore very carefully, breaking it with a small hammer on an anvil and distributing it into three or four piles. The first-class may be worth $2,000 per ton; the second, $400; third, $125; and the rest is thrown out as waste. This third or poorest grade then all call "Bowers," or, more properly spelled, Bauer's. I asked a tributing ore-sorter the other day why such a peculiar name was given to that class of ore. He said: "You see, after the milling, discount and other drawbacks are taken out of it, what little there is left goes for beer; so we call it "Bauer's." By way of further explanation, I will state that Gus Bauer is the well-known brewer of Austin, and brews the only genuine lager beer in this state. The delegates to the Odd Fellows' Grand Lodge from your section all pronounced it the true business, and would drink nothing else.

A couple of our most prominent and orderly citizens got into a spat the other day about the collections for the coming Fourth of July celebration. Mean words passed and one kicked the other. The kicker was arrested on charge of assault and battery, and to-day a jury trial before Justice Weller was the result. The strongest point in evidence hinged on whether the victim told the other to kiss or kick him, and two witnesses swore that he said both. So the jury immediately gave in a verdict of not guilty. The trial was a very funny one, with a crowded audience, and for lively interest came fully up to the Democratic Convention.

Down at Ledlie, on Reese river, half a dozen miles from here, a large salmon of the land-locked variety is reported to have been caught and placed in a small pond for people to look at. It came up the river from the Humboldt, and its weight has been variously estimated by sundry veracious persons at from thirty to 180 pounds. If that fish is not killed soon he will weigh a couple of tons before the Summer is over. The other day Uncle Isaac James, Bob Boyle and Billy Ohugemar went down to the river fishing. It was a hot day, but they sat under the shade of the mushrooms along the banks and fished very comfortably for four hours without getting a bite. Suddenly Bob waked out of a sound snooze and excitedly shouted: "Look here, boys ! I've got him ! One of them bit fish from the Humboldt ! Lord, how he springs my pole. See that, now." Just then his pole snapped short off in the middle. Bob rushed frantically and grabbed the piece with the line to it. Then he followed up the line till he found his baited hook stuck fast in one of those big mushrooms, not having been in the water at all. Bob's exploit waked up Uncle Isaac, who pulled in his line and found he had forgotten to bait his hook. Billy crawled out from under his toadstool, rubbed his eyes and hitched up the horses to the buckboard, saying he thought 'twas about time they went back home. Then they borrowed an ax, and in ten minutes loaded their vehicle with choice mushrooms, and treated their friends freely to them when they got back home to Austin, declaring that was what they went after. They report mushrooms standing so thick in some of the fields along the river as to completely cover the ground, like a great white scab.

Quite a snug little sum of money has been raised for the celebration of the coming Fourth in true Austin and Gold Hill style.

The closing examination for the term of our public schools is progressing, and the pupils are acquitting themselves very creditably. The schools will close for a two month's vacation next Thursday.

A Blaine and Logan Club will be formed here after the Fourth.

Kites of all sizes and degrees of meritorious construction are seen floating in the air on favorable days. The heathen Chinee is the boss kite-maker.

Sagebrush is used to a considerable extent as fuel, especially by the Piutes about town. And as it burns it sends forth upon the atmosphere a very di-stink-tive, original or aboriginal smell.

If the present weather indications hold out, the chances for a good crop of cloudbursts during the season will be excellent.

Louis Loustalot, of the Lafayette restaurant, looks as much like Ben Butler as a twin brother. And he is a Democrat, but he swears that if the party nominate old Ben he won't vote for him. He says he has run a restaurant too long to admire a man who steals spoons. ALF. DOTEN. 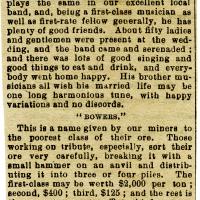