The rattle and the roar of heaven's artillery has considerably commingled with the busy racket of the hammer and the saw during the last two or three days, especially in the afternoon, and quite a perceptible flavor of excitement has disturbed the chronic equanimity of Austin's population. Heavy thunder storms have prevailed every afternoon for a week, but Tuesday afternoon a small waterlogged cloud dumped its contents against the summit sagebrush sources of this canyon, and pretty soon torrents of dirty water came rolling down. The Manhattan mill whistle tooted the alarm, and everybody knew what it meant. Miners got out in a hurry, and there was a rush from all quarters to see the flood come down. But, bah ! it wasn't much of a flood after all. Nothing to be compared to the famous cloudburst floods of August, 1874, which swept away the Postoffice and other buildings, and again in August, 1878, when the Reveille office was washed down stream, and both sides of Main street generally wrecked. This time two or three pretty good-sized streams of water sloshed drunkenly down the street, doing no material damage, but considerably interesting the crowds of Piutes—bucks, squaws and papooses—who lined the sidewalks beneath the protecting awnings. The main sewer of Gold Hill would easily carry twice as much of a flood. But that is about three times as big as Austin's Main-street sewer, with five times steeper descent. And the old Reese River Pioneer shook his head ominously, and hopefully said to Johnny-Come-Lately, with a tinge of disappointment, "Oh, no; this ain't nothin'. Jest you wait till August, the proper time for 'em, and we'll show you a cloudburst that'll make yer eyes bug out. Don't smile, sonny; we'll show you the true racket yet."

Most of the hammering and sawing before mentioned was in putting up barricades against the anticipated flood. All along both sides of Main street everybody have their floodgates ready to slip in across their doorways, three or four feet high above the thresholds, and planks always at hand to nail across any other vulnerable point. Yet all this hammering and sawing is not on account of floods of water, but some of it is preparatory to furnishing floods of whisky for the thirsty Democratic throats which will constitute a part of the Democratic State Convention to meet here on the 10th of next month. Sundry new saloons are being opened and fitted up in good style for the reception and entertainment of those delegates, and carpenters, painters and whitewashers find busy employment. But it is desired to be particularly understood that all delegates elected should by all means come, and not be mean enough to send proxies. Proxies don't drink; proxies don't roll the festive billiard ball; proxies don't run faro or even restaurants; there's no nutriment in proxies. One Matt. Canavan is worth three dozen proxies. If the Democratic party expects to achieve any success in Austin through this convention, every delegate must come in person, and with money, but no proxies in his pocket.

The chances are that before my next regular letter the Chicago Convention will decide who is to be the next President of these United States. Blaine's chances are too good for success, and Arthur's chances are not good enough. Grant's recent misfortune in stocks, and the resultant announcement of a desire on the part of personally admiring friends to make up another purse to put him on his feet again, does not meet with general admiration, as looking too much like making him a sort of popular mendicant. And the old Chief himself would doubtless rather be left out of the contest, yet should he be nominated he will be elected, even though, perhaps, Austin should go against him. Will the sable caballo be Edmunds, Washburne or Ben. Butler? We shall soon know. Ah ! but should Blaine be nominated just think of how that book of his will be criticized and politically banged over his unfortunate head. "Would that mine enemy would write a book," would come smilingly into the minds and voices of his opponents, and they would hilariously remark: "Here we have him." So, even if Blaine gets beaten in the nomination, his book will be finely advertised and make him rich.

Of course, is a matter of not pronounced excitement at present, but all sorts of rumors are floating in the air, as for instance, to the effect that Mr. Wren, of Eureka, wants to be United States Senator in place of J. P. Jones, and that M. D. Foley, of Eureka, would like Cassidy's place in Congress; also, that Fred. Hart, the well-known and popular young journalist, is coming over from San Francisco shortly to run the Eureka Leader, which they own, in their political interest. Political aspirations, locally nearer to where I am now writing, will be subject to future notice and critical consideration, on both sides of the political proposition, in due time.

A genuine old Forty-niner passed down Main street day before yesterday. Most people who saw him merely considered him a queer-looking old duck, but there were many, like myself, who fraternally smiled as we recognized one of the typical old boys. The old California gold miner was unmistakably written all over him. He was a short, square-built old youngster, with full grizzled hair and beard that had seen no other trimming than his old shears or knife could do since he came into the land of gold in the days of old, and his dilapidated brown felt hat had a peculiar jaunty old mash over the larboard side of his head that only belongs to and is accomplished successfully by his kind. One trousers' leg was in his boot, and the other wasn't, and no overcoat obscured the old gray flannel shirt he wore. His trusty old double-barreled shotgun—sudden death to thousands of quail, jackass rabbits, deer, etc.---was slung under his left arm by a bit of baling rope across his right shoulder, and an old briar-root pipe was in his mouth. He led a quiet-looking sorrel horse, well packed with a canvas tent, cooking utensils, pick, shovel and other practical utensils, and the independent, dam-yer-eyes swing of that blessed old-time gold digger was refreshing to contemplate. He cast a sort of practical glance at the street and buildings as he went along, same as he has in passing through hundreds of towns, many of which have died in the long ago, but he was not worrying his old noddle very much as to his night's lodging. He looked straight down the grade toward Reese river, and thought only of a place to picket out his horse in good feed, and where he could set up his little old hotel and camp for a day or two. He had got out of California by way of Bodie; had cruised around through the eastern part of the State, almost to the Utah line, seen and prospected the reputed rich gold mines of Osceola, and was now pointing his weather-beaten old pioneer nose straight toward the Golden west—to God's country—the genial land of sunshine and flowers, the grape and the fig, where he can always live easily and comfortably amid glorious surroundings, pleasant reminiscences, and die happy. Pass along, old boy, may your old briar-root pipe always smoke freely amid peace and contentment.

William Hardy, well-known as a thoroughly experienced mining and millman for numerous years on the Comstock, was here a few days ago, and took a good look at the mining and milling situation generally, and very practically, as he might be expected to do. He found considerable rich ore in the mining depths, and proved the method of ore reduction; in short he left with a good impression of Austin and its bullion resources.

Bishop Whitaker arrived night before last, and has renewed acquaintance with many old personal friends. He attended the strawberry festival given by the ladies of the M. E. Church last evening, and will go to Belmont to-morrow, to return next Monday and stay a few days in Austin. The festival last evening was a grand success in every respect, financially and all other ways, the hall being crowded and everybody enjoying it. Strawberries two-bits a box.

The Piute bucks here in Austin always carefully protect their hats against the heavy rain showers, by tying barley sacks over and around them, but their linen dusters have to take it.

The numerous big failures in the East are simply terrific, but it is remarkable that most of them promise to pay about ninety cents on the dollar-equally remarkable that they don't do it.

The item going the round of the papers about how our big millionaires made their first dollar is well enough as far as it goes. But how about the spending of their last dollar? Ask Jim Keene, and, a few years hence, ask some of the rest. Yet the item speaks of none that got their first dollar before they were ten years old. Bah ! how slow. Hundreds of smart boys have gobbled their first dollar, got into jail for it and built railroads afterward. No one can safely bet on the outcroppings or outcomings of fortune. ALF. DOTEN. 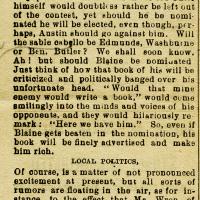