Our great ore reducer and bullion producer, the Manhattan mill, has at last shut down to take a rest. It shut down on Wednesday of last week, so far as the stamps were concerned, but the pan department kept running for the rest of the week, and, in fact, did not get through with the clean-up until last Monday or Tuesday.

Of the Manhattan mill means something more than with ordinary mills. Being operated by the dry crushing, Stedefeldt process, working rich ore, it becomes loaded with rich chloride dust from one end to the other. Commencing at the reception and battery end, it has to be swept clean throughout every department, and the extensive furnace flue dust chambers, through the intricate winding passages of which the dry-floured ore or pulp has to pass a distance of about 500 feet to the tall, main brick chimney or stack, all are swept clean as soon as sufficiently cooled to permit. These sweepings, added to the accumulated pulp at the furnace when the batteries stop, keep the pan department well and most lucratively employed for some days, for these sweepings are decidedly rich, as shown by the daily shipments of ten bullion bricks, each brick worth over $1,000. Yet, even now, as the old mill stands, thoroughly swept and cleaned out, it is completely saturated with rich chloride ore fumes throughout, even to the shingles on the broad roofs, and were the whole concern to burn up, or down, the ground it covers would pay splendidly to run through amalgamating pans, following up its regular old yield of ten bricks a day for a week. Yes, and then it would pay well to cremate Superintendent Charley Durning, James Robinson, the ore weigher and sampler, and James Sullivan, the furnace manager, all three of whom have worked amid the dust of the mill for so many long years that they, also, have become thoroughly saturated with the richest chloride.

Occasionally, during the last few years, owing to scarcity of ore in the mine, the mill has only been able to make short runs of three or four months at a time, then having to wait for an adequate ore accumulation before starting up again. This last run commenced on the 28th of October, 1882, and has been continuous with the exception of one or two brief stoppages, for a period of sixteen months, being the longest run for some years. It does not close now from lack of ore entirely, but to make a general overhauling, especially in the pan department, where the old pan frames have been giving considerable trouble, and have to be renewed. The mill will be put in complete repair throughout, meanwhile allowing some weeks' time for a good accumulation of ore, not only at the mill, but at the dumps and ore houses of the various mining works. The result of the sixteen months run is pretty good for an old mill out in the country, grinding up a lot of little narrow ledges. During that period it reduced 8.306 tons of ore, and produced therefrom silver bullion to the amount of $1,662,000, the average yield being a little over $200 per ton. Of course the ore varies very much in value, form below $100 per ton to up in the thousands, but the average output of the mill has been very steadily continuous in the way of regular bullion shipments—ten bars at a time, each brick worth over $1,000. This is essentially silver bullion, the very small proportion of gold contained in it not being taken into consideration. The Manhattan has been the only working mill here for some years past, and from its records, as well as other sources, the yield of Reese River mining district, including neighboring ores milled here, has thus far amounted to over $30,000,000. The Manhattan still averages $1,000,000 a year, right straight along.

It must be borne in mind that although the ore averages so richly the expense of extraction and reduction is much greater here than where the ledges are large, with plenty of free-milling ores. The numerous veins are fames for their narrowness and uncertainty as well as for their richness. The ore belt is about as wide as the Comstock, and the veins are comparatively as numerous as the veins in the human body; yes, and comparatively as large, being from two inches to two or three feet in width, and from three to six inches on the average. And they may appropriately be termed varicose veins, bunching out in places and pinching out in others, with an occasional aneurism that pays big. And the simile holds good in the ruby silver character of the ore composing these pretty little veins, showing streaks and spots like human blood. These mines have been and still are very systematically and carefully worked, most excellent mining judgment and engineering skill controlling the whole. Were they not thus managed, under the most complete, thoroughly-organized system, they could not be made to pay. The past shows for itself, and the future continues very promising. These mines have not yet been worked more than one-third as deep as the Comstock, so far as actual depth is concerned. The veins lie at such a flat angle that the principal incline, the Paxton, has penetrated from the surface some 1800 feet, following the ledge, or vein, and yet an hardly be considered to have reached 1000 feet below the surface. About 40 men are given employment, nearly half of whom work on lease or contract. Quite a number of prospecting mines are also worked outside of those belonging to the Manhattan Company, but this company regulates and controls the situation. The amount of ore in sight in the various workings of the company is not so good as at the commencement of the recent long run of the mill, yet the showing at all points continues healthy and very promising, and the exceedingly rich character of the ore holds out well at the very lowest depths attained. Some of the richest ruby and stephanite ore ever found here has been produced lately from the lower levels. Owing to the breakages in the veins and general uncertainties, a vast amount of dead work has to be done, and even in bonanza times, when there is plenty of rich ore insight, there is no cessation of prospecting work, with a view to future resources. As before remarked, good practical mining judgment and careful engineering has to be constantly brought to bear, and vigilant watchfulness at all points. The Manhattan Company does not pay dividends at present, but it pays all its bills, needs no assessments, and keeps things running on a solid foundation. The which proposition is pretty good in itself for this community.

TOO MUCH OF A NOT GOOD THING.

Why is it that the telegrams from the East are allowed to consist so largely of items unimportant to people of this section generally. It is well enough to state that the Ohio river is up and flooding a large portion of North America, but the vast majority of people on this coast did not come from Ohio, and never even washed in that limpid stream. Consequently, the harrowing details of the sweeping away of pig pens and chicken coops, as well as the specified inches in rise or fall at all the numerous points up and down the river, are of local importance and interest more to Ohioans who are not running for the Presidency than to the general public, for whom newspaper telegrams are supposed to be intended. And so with European telegrams. What the blazes do we care about knowing that Bismarck has the belly-ache? Why physic the telegraph with so much trashy truck? Yet now John Mackay is stringing cables across the ocean, and more wires all over the country, with a new invention which is to give us ever so much more telegraphic facilities than we ever dreamed of before. There is too much of the thing already. If, however, Mackay will succeed in killing about seven-eighths of the present telegraphic noodle reporters and substituting something more practically useful, he will receive the blessing of all sensible newspaper men and the suffering public generally.

I notice that the Republican State Central Committee is to hold a meeting next Monday in your city. This will be the first meeting of the campaign, and the most important in many respects. It will arrange time and place for the State Convention, give apportionment of delegates thereto, and give other pertinent details of work to be laid out for the campaign. And it should be borne in mind that the Democracy have a special eye to the present campaign, which is likely to prove the most important in the political history of the country. A great responsibility rests upon the action of the present republican committee, and they had better bear this fact in mind, and be careful about making any false moves on the political checker board.

The skating rink on Main street has been considerably improved by the recent thaw. A man may skate about and imagine that he is a steamboat skipping through the water, and even the ladies, when they happen to slip up, and come down, can imagine themselves taking a sitz bath, cooling and nice, like mopping up a dining-room floor.

Austin youngsters are, as a general rule, not worse than the youngsters of other good localities in this State, but at least one youth came to deserved grief the other evening. His viciously amorous propensities induced him to stop "Topsy," a well-known Piute female who happened to be passing along, and the result was that the foolish youth not only got roughly handled by Topsy herself, but her buck, who happened along about that time, jerked an old knife and dug a hole in the back of the boy' neck, and also under his eye. He escaped by lively running, but people generally approve of his bad luck, as a good lesson to the other boys who are big enough to know better. And most people who know Topsy to be a "son of a gun on wheels" do not admire the youth's discretion. He got a salutary lesson, which may, perhaps, prove of benefit, even so far as white girls may be concerned.

Our Austin company of the Nevada National Guard advertised to turn out on public parade Washington's Birthday, but backed out because the expected uniforms for their band did not arrive. Would Washington have failed to turn out with his army to battle for any such reason? People thought it was the company that was to parade, not the band. A plain drum and fife would have answered very well, but the company tacitly said that it was nobody, nothing with a uniformed band.

The water pipes about town which were frozen have all thawed out or been properly fixed, and all concerned are happy.

A. A. Flint has torn down a couple of China wash-houses on Main street, and contemplates the erection of an adobe furniture store in their place. This is the only improvement projected in the town at present.

Many old prospectors are talking glibly about going to Coeur d'Alene or Quijotoa before long, but they won't go. They do not know how to pronounce the name of either locality.

Is this new moon a dry or a wet one? 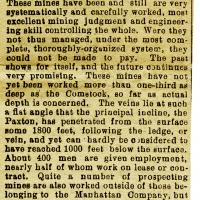