The re-assembling of Congress is the principal item of exciting interest outside of local affairs, to us of Eastern Nevada. Yet even that does not much disturb the even tenor of our chronic equanimity. We keep somewhat of an interested eye, however, upon the doings of our Congressional Representatives, and do not forget to remember what we expect of them. And if they desire to remain in favor with their constituents, it will be well for them to bear this proposition in mind. No plans or political wires laid for re-election are half as effective as a handsome, well approved record of good stewardship—of faithful services rendered.

In the coming campaign Nevada’s Representatives at Washington, if they desire to continue in public favor, will have to render account to their constituents of their doings, and happy and successful may they be, if the popular verdict is: Well done good and faithful, etc., enter thou into the halls of Congress again.

A BOOM OF CRIME.

Why is it that the telegraphic wires from the East come laden at the present time with so many accounts of terrible murderous deeds and criminal horrors? Does the scent of blood come from some fresh murder, wafted upon the first cold breezes of Winter, get into the nostrils of the devilishly inclined, and excite them to competitive emulation in crime? The good people of the East, with plenty of churches and other arrangements to keep them good, have always been too readily inclined to consider the great, broad West, and especially California, Nevada and other newly-settled sections of the Pacific Coast, as semi-civilized, and the abode of all sorts of border ruffians, natural desperadoes, outlaws and blood-thirsty villains generally; yet we are always away behind Eastern wickedness in that respect. Occasionally somebody gets killed in an incidental row or a drunken fracas, or somebody is deliberately murdered for money, or some other quiet, mercenary motive, and the result is an occasional hanging; but wholesale butcheries, the slaughtering of whole families, and similar domestic horrors, such as we read of as occurring so frequently in various parts of the Atlantic States, are most gratifyingly absent from our criminal record. Our most noted desperadoes, murderers and scoundrels generally, come from the East; but there is evidently plenty of that element left to serve the devil and curse the reputation of the country.

THE LIABILITIES OF BONDSMEN.

Perhaps it is right that the bondsmen of your County Treasurer Nevin should be held responsible for his robbery. Perhaps it is right that public moneys taken forcibly by burglars should be forcibly restored by legal or illegal drafts upon the pockets of a few honest private citizens who have been accommodating enough to sign a bond merely that the Treasurer elected by the people may be enabled to assume and conduct the duties of the office. They signed Nevin’s bond, but presumably not that of the burglars. But they are held for the burglary, all the same. Legally this may be all right, but morally and socially it is not. They did not participate in the emoluments or financial benefits of the office, but are held responsible for an outside misfortune, so to speak, not contemplated or included in the election or official career of Nevin. Suppose a red-not streak of lightning should melt both vault and coin into one mass and drive it down to the lowest unproductive level of the Comstock, or suppose a gaping earthquake should swallow it; or suppose some bloody Britisher of the O’Donovan Rossa stamp, or other enemy of the Irish cause, should put a hatful of dynamite under the Treasury and blow Nevin and all sky-high, should his bondsmen be held responsible and be made to pay for it? A man may guarantee the financial honesty of his friend by signing his note, yet should that note happen to get lost or destroyed, the friendly responsibility ceases. These are interesting points for the consideration of all who may wish to show their financial vanity in the future by becoming sureties on the bonds of newly elected public officers. The best way to solve this problem would be for everybody hereafter to refuse to sign each and all such bonds and so let the thing work itself out.

As regards those magnificent sunsets which have been so glowingly expatiated upon by the press of late throughout the Pacific Coast, I would simply remark that they have been very common here in Austin for years, in fact so common as not to have been considered worth mentioning. But they have always been esthetically appreciated and enjoyed, however, all the same, and it is gratifying to know that they have at length been observably extended to the Comstock and the rest of the Pacific Coast. Yet, judging from the various well-written and critical descriptions they can hardly be, elsewhere, more than mere reflections of Austin sunsets. And refulgently glowing as are those newspaper descriptions they do not, cannot do justice to the original subject. A genuine Austin sunset of the extra sort is a successive episode of golden, roseate, grandly-pervading glory that can only be witnessed and experienced with holy, heartfelt emotion. As the retiring God of Day slowly and impressively sinks below the serrated tops of the sagebrush-coated mountains he casts aloft diagonally across the cloud-embroidered sky long arms of golden light, as though giving his parting benediction. Then tier upon tier of silver and gilt-edged clouds, terraced one above the other, reflect back the grand overflow of glory, slowly changing from one glorious hue and combination of hues to another until the whole face of the western heavens is one noble, glowing panorama, painted by an immortal artist, whose pictures cannot be truly copied or even their colors transferred to human canvas. Even as the creeping, stealthy darkness glooms upward and gently erases the grand picture, the fading, dying hues still linger photographed upon the entranced vision and die pleasantly within the soul. Italian sunsets, or sunsets anywhere else are mere zephyr wool and crotchet finery as compared with a first-class Austin sunset.

Some newspaper authorities pretend to say that these gorgeous sunsets signify and prognosticate pleasant weather and a dry, open winter, while others set forth a directly contrary idea. Both are right to a certain extent. Some ascribe the cause of them to dry fog, others to atmospheric humidity; many say it is electricity, and one shrewd authority says they are caused by traveling clouds of ashes from volcanic eruptions in Alaska. Meanwhile the Manhattan mill pounds right steadily along, the mines are worked vigorously and well, and the resultant silver bricks are even more financially and mercenarily gratifying than even the most glorious sunset.

Not to make light of anything connected with glorious brilliancy, I am reminded of old Bob’s explanation of the real nature and merits of that brand of kerosene "Headlight Oil." Old Bob is a Reese River pioneer, therefore is well posted and always adheres rigidly to the truth.

"When I was a-whalin’ in the old May and Marthy, way up in the Artic Ocean," said he, "here’s the way we got our headlight ile. You see, boys, when you’ve got a whale alongside and cuttin’ him in, the blubber is taken off in long strips, or blanket pieces, just as you’d pare an apple or a pertater, the carcass of the whale turnin’ over and over in the water as the strips peel off in h’istin’ ‘em aboard; but fust of all we go for the head matter. A whale’s head is the biggest end of him, and we call it the case. All there is ter do is ter cut a hole in the top of it and bail out his brains with draw buckets. I’ve seen as high as twenty-eight bar’ls of it taken out of a single case, It’s whitish and mushy, but its where the spermacetty comes from, and the best ile. And that’s why they call it headlight ile."

Last Tuesday evening Warner Hillyer was married at St. George’s Church to Miss Christine White, a nice young lady of this place, about eighteen years of age. Hillyer is a nephew of Judge E. W. Hillyer, deceased, Curt. Hillyer and M. C. Hillyer, of your section. He is a young man, formerly well known in the Comstock region, and was a resident of Como in its palmy days. He has been in Reese River Valley and vicinity for the last few years, engaged in ranching and cattle-herding, and has picked up a few shells for himself, so he is considered tolerably well fixed and worthy of matrimony. He has many friends to wish him joy.

Colonel U. E. Allen, formerly member of the Legislature, and well known in your section, as well as here, occasionally aggravates his Austin friends by sending them bills of fare of the Scoville House Waterbury, Connecticut, of which hostelry he is major domo or commissary. They are away ahead of poached eggs or quail on toast at that house, and such descriptive settings forth of good grub, on paper, are enough to drive a hungry Washoeite wild. It is mean of him.

Balls, dances, socials and surprise parties are the order of the day now, or, rather, the evening and the season. Very little snow thus far, but lots of fun with what comes. Even the juvenile Piutes like to snowball Chinamen when they can do so with safety. ALF. DOTEN. 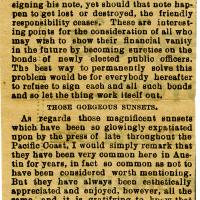