The near approach of Thanksgiving Day has caused the approach of numerous turkeys and other acceptable birds to Austin. The ranchers of both Reese River and Smoky Valleys have shown their ability and natural facilities in that respect by bringing in some big cages on wheels, of the aforesaid birds, and they find a very good market, at good prices. Seventeen pound turkeys are common, and raffling for all sized turkeys and chickens, as well as shooting for the same, is now fully in order. Some of our local pigeon shootists tried it on last Sunday. No very good shooting was done, but the best shooter got away with the most birds all the same.

The recent arrest of Hon. G. E. Spencer, ex-United States Senator form Alabama, at this place, created no serious excitement. Spencer is well known in this section and was not hard to find. When Attorney General Brewster, at Washington, telegraphed to United States Marshal Corbett, of this State, that Spencer was wanted, L. P. Wardle, of Virginia City, and Al. Knuckols, of Cherry Creek, who were deputized, had no difficulty in capturing their man. Spencer is a pleasant gentleman and offered to armed resistance; in fact, when he left here on Tuesday morning last, en route to Washington, he looked like a man starting on a pleasure trip with a couple of invited friends. They will doubtless be his guests during the trip and while in Washington, and he may bring them back home with him. What specific effect this important arrest may have in the great Star-route investigation at Washington remains to be seen; anyhow it was not made anything of a local sensation here.

And now the newspapers say that John Mackay has also gone East on his telegraph business. The grievous decline in stocks would seem to indicate that such is the case, and that the hopeful little boom, presumably induced by his presence on the Comstock and in the city of Sin and stocks by the Golden Gate, had collapsed in consequence. The chances are that the sufferers in the outcome were not the brokers or the shrewd dealers. They knew Mackay's presence would make a comfortable little deal, regardless of any increased merit or good prospects in the mines, and they figured thereon, getting out nicely before MacKay got out for the East. When our Uncle James comes along, in a few weeks from now, look out for another boom, either up or down. But the small outside stock dealers are inclined to be distrustful when Fair comes, and do not care to shove up all their coin recklessly in honor of the occasion. In fact, the shrewdest among them are those who sail in when John comes, but judiciously copper the market when Uncle Jimmy is around. Yet after all, stock booms are somewhat like soap bubbles, beautiful while they last, and most attractive when most inflated. And when they collapse, the margins and "soap" as suddenly disappear. The manipulators of the suds can blow more bubbles as readily when they see fit, yet what mortal man has ever ascertained the thickness of a soap bubble?

And so they have found the old sledge that John Mackay used to practice with when mining in the Ophir twenty years ago. John, no doubt, played "old sledge" quite frequently in the early days, but the chances are that it is not easy to prove satisfactorily that John Mackay ever swung that identical old sledge. No wonder it was found to be badly rusted and the handle rotted off, after its long sleep in the upper levels. It must look as badly dilapidated as Rip Van Winkle's gun. Mr. Dadd has in his possession the field glass with which old Reese discovered Reese river. It is strongly microscopic, and had need to be, otherwise the river would never have been discovered with it. The cork slide at the top is somewhat decayed, but on removal the interior of the glass still retains a faint smell of whisky. He will contribute this interesting relic to the cabinet of the Reese River Pioneers.

The Manhattan mill still continues its chronic and prosperous run, which has now lasted over a year. It is pounding right straight along in the even tenor of its way, and bids fair to keep doing so for the next year or two. There is plenty of ore in this section besides what is required to run this one mill; any amount of ledges containing ores rich in silver, more or less combined with base metals and minerals, are lying idle in the adjacent hillsides, and it seems strange that some enterprising capitalists do not venture a few of their rusty thousands in trying their luck with a new mill or a smelter. But perhaps the disastrous experience of the numerous mills built here in the early days is a sufficient warning to capitalists of the present time. They worked rich ores and charged huge prices, but somehow failed to win, and one after the other died and passed into the abyssmal pit of disastrous experimental history. I heard a queer little story the other day about one of these old pioneer rock smashers. It was down the canyon, below town, and had lots of work for a time, or until it bursted its proprietors and was moved out to White Pine. The cost of working the peculiar ores of this section was fearful, owing to lack of understanding and experiences, and even exorbitant rates, waste and other perquisites failed to produce affluent profits to the mill company. A mining man brought in a lot of ore from Yankee Blade, worth about $600 a ton, and had it put through the mill. After deducting all expenses, they paid him a balance in his favor of $7 50. He took it like a philosopher, thoughtfully put it in his hungry purse, and reflectively remarked: "That's not a very big pile, considering the quality of the ore, but, after all, I s'pose I ought to be thankful for that much. You most certainly do work ore very close in this mill; very close; almighty close; in fact, I may say damn close; a little closer, and you'd have took it all."

Since the recent death of Mullen, considerable quiet search has been made for the $40,000 or less of money or bullion he was reputed to have buried somewhere about here, and the locality of which he unfortunately was unable to reveal before delirium and death prevented. Sundry shrewd parties conversant with Mullen and his habits in life, where he worked and used to be seen going regularly, or at various times, or at various odd times, and as various localities have been judiciously putting in their picks, but thus far with no success whatever. It is said, however, that in tearing down his little old cabin, $11 was found in one chink of the wall, and $80 in another chink, almost sufficient to pay his funeral expenses. The foundations were also vigorously uprooted to the most hopeful extent, but with no further financial returns. The chances are against finding the main body of the treasure, yet some folks still have a wonderful faith therein. Let them dream on the problem, and work on it. They are sure to solve it somehow.

Under this head can come all sorts of irrelevant trash, like the "local" item headings of some newspapers nowadays, but this is not allowable in these letters.

Mr. Dadd, who attends all three of the churches regularly, is much pleased to observe the good attendance at each, and feels better for it every Sunday, and all through the week. There's novelty and variety to it for him. At one he says he holds copy while the preacher reads; at another he merely listens and watches the ceremonies, and at the third he credits the pulpit with considerable work and intelligent discussion.

Our Austin dry goods dealers have inaugurated a regular red-hot rivalry episode, like the famous "clothing war" on the Comstock a few years ago, when the miners and poor men of Virginia and Gold Hill were given a glorious opportunity to buy themselves rich and wear better clothes than they ever had before in their lives. I shall soon be able to appear in gorgeous array once more at little or no expense. A patient waiter is no loser.

The weather continues fine, but there is snow on the hillsides, and the Piutes wear blankets over or under their linen dusters. They live on pine nuts, and use the shells for fuel.

Spykens has found a ledge of argentiferous silica, which is rich in base metal of some kind. He is hopefully investigating it. ALF. DOTEN. 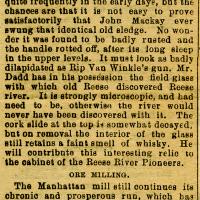