The Reveille now has just as good telegraphic dispatches as any other paper on the Pacific Coast, in proportion to its size and field. They are newsy, fresh, varied, and, during the last day or two, decidedly interesting, especially to former Comstockers. To an old resident of that section, like myself, familiar with the ins and outs of everything and everybody, the latest and most important intelligence from the big bonanza croppings and shells is like turtle soup with the meat and gravy of the Eastern dispatches. Then, too, we eagerly look for the ENTERPRISE, with its supplementary details, full accounts, and latest dispatches from all parts of the world, only one day behind the local lightning.

It does seem strange, and does not look well for Storey county, with her treasury in a big brick building, right in the heart of the biggest town or city in the State, to have that treasury vault systematically robbed almost year after year. Treasurer Carrick robbed it, and said he did so because he required coin to put up as "more mud" in his little stock speculations, etc. He was sent to State Prison a little while, and then rejoined his wife and family and emigrated to where his grape-vine twineth and his fig tree flourisheth, in a more genial region, where stocks trouble not and the lesson he learned at the expense of Storey county will do him a heap of good. But this last robbery is a stunner. How did those bold, burglarious brigands know that the time-lock on the safe was defective? Why did they so confidently thus order Treasurer Nevin: "You open the door of the vault and take the combination off the safe, and we will chance the time-lock?" Well, these enterprising robbers rubbed past the Sheriff's office and jail, just across the entry, and sacked the Treasury of over $8,000, leaving poor Nevin locked up in the safe in place of the gold and silver. It took longer to get him out of that than it did to steal the money and get away with it. Perhaps, however, Nevin was mistaken in his estimate of the amount of coin in the vault. Anyhow, the moral to be pointed in this and sundry other recent cases is somewhat as follows: County Treasurers are too much exposed. They should not be compelled to work in their offices after sunset. They should never be allowed to have over six-bits in the safe at any one time. The time-locks should be perfect. The safe or vault should be abolished, for it is a costly delusion and an infernal humbug. Nevin's bondsmen are responsible only for his personal honesty and efficiency while in office, therefore the misfortune of this bold robbery necessarily has to fall upon the overburdened taxpayers of Storey County.

The Manhattan mill, which does all the ore grinding and bullion brick production for this mining district, commenced its present long-continued run on the 28th of October, 1882, consequently has been running over a year without having to stop from lack of ore. At one time last Summer it shut down about three weeks for absolutely necessary repairs, and at a few other times during the year requisite repairs have caused stoppages of a day or two, but its general rate of ore reduction has been about 600 tons per month on the average, the year's run yielding considerably over a million dollars. But the best part of the proposition lies in the fact that the mines themselves are looking and promising better even than they did a year ago, with more ore in sight and better facilities for extraction. These mines are very systematically managed, under the control of the Manhattan Company, and most certainly are being worked for all they are worth, due attention being always given to prospecting and exploring ahead for new deposits, while the present ores are being worked out. Thus a vast amount of costly dead work is constantly being done, but it pays first rate in the end, and although no dividends are declared, no assessments have to be levied, which is a very comfortable circumstance. Anyhow, the Manhattan Company flourishes and prospers well, and supports a very flourishing community.

John Booth, proprietor of the Reveille, occasionally takes a trip out in the country, and has just returned from one to Idaho, Salt Lake, etc. He had a pretty good time, and was well treated, but found no place like home, even in the City of the Saints, consequently comes back more in love with Austin than ever. As to that matter, scores of old residents find their way back feeling the same way, as has been, and still is, the experience of numerous old Comstockers. They pack up and leave, shaking the dust off their heels, saying, "Good bye, old played out chicken camp," and they go away up in Washington Territory, or some similar seaport, dreaming of the glorious things they have read of and been told about. They all go away hilariously hopeful, and many are never able to get back; yet frequently some return like Prodigal sons, tired of big trout, salmon, fat grouse, quail on toast, and all that sort of fancy husks, and are delighted to get Austin horn steaks and sausage once more. Thus, too, they come back even from "the old country," remembering better prosperity and easier times here than they find abroad. People with plenty of money, however, may find London, Paris, San Francisco, or other outside localities preferable to Austin in some respects.

The ball of the Austin National Guard night before last, was the chief fantastic toe event of the season. International Hall was crowded all night with the happiest, most festive assemblage in the world, and the consequent wealth flowing into the treasury of the company places it on a bonanza foundation. They will be able to afford more ample coat-tails for dress parade.

Mr. Dadd thinks Sharon is having a Hill of a time in his present matrimonial blackmailing episode, in fact, too much up hill for a little man. But such seems to be the penalty of affluence on the Pacific Coast; look at Baldwin, Mackay, Fair and others for example. Mr. Dadd most earnestly desires to avoid getting rich. He is poor, but proud and comfortably happy and wishes to remain so. Pride and poverty is said to have been the downfall of old Cole's dog.

Surprise parties are an especial feature in Austin society notions, and are well followed up, occurring frequently, or as often as occasion offers. They are always agreeable and nobody is ever totally surprised. Balls and dances are frequent and always well attended, and the shrewdest bean is he who gets a chance to go home with a girl that somebody else brought to the dance.

If Senator Jones cannot be induced to try again to succeed himself, perhaps Hon. C. C. Stevenson, of Gold Hill, might be the man. He has been suggested, and is not only a man of known ability and legislative experience, but also is very influential, with a good, square, politically-consistent record. He is not as good a talker as Jones, but he is always practical, and if he would work as hard and do as well for his constituents and the State as he has always done for himself, he could not fail to give perfect satisfaction. But cannot Carson or Reno put up somebody to succeed Jones? Have they no men of similar ability? There is plenty of time, however, to study over and discuss this important matter. ALF DOTEN. 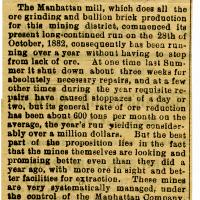