The regular "October flurry" of the last two or three days has set the weather prophets at work, as usual. And as usual they predict a "hard Winter." They tell how the chipmunks are building their nests among the higher rocks, and in the dryest, warmest locations, and are also laying in an unusually heavy supply of pine-nuts. The Piutes also happen to be doing the same thing in the matter of nuts, for the reason that the harvest of that staple commodity has been unusually good this season. Then they go on to mention the significant superabundance of flies, which circumstance is also correct, for during the last three or four months of unremittingly hot weather the flies have improved their time, multiplying crop after crop, until the air and everything else was thick with them. But this Wintry snap has laid them out cold, although a possible spell of warm weather may temporarily thaw them out of their retirement. Anyhow the pine-nut crop has been splendid this season, and the Piutes are returning from their nut orchards out in the high mountain ranges loaded with numerous sacks and baskets of them, and they are both happy and independent. They will feel like bonanza folks until their nuts are gone and they have come down to the refuse grub and slop barrels of the white folks.

The other day Spykens received a strange newspaper, one he had never heard of before, and he nearly worried himself into a fit, reading it carefully through, and looking it over and over to find out why anybody had sent it to him. He saw no item or paragraph which referred to him, or was of special interest to him, so he finally arose in wrath and cremated it in the stove. It was not the first of his experience in that line, however. The news editorial fraternity can appreciate this exasperating annoyance to the most complete extent. Any person who will thus send unmarked a strange paper to a newspaper office is a depraved, heartless brute. The ever faithful and vigilant news editor grabs his trusty shears and runs his weary eyes eagerly through each column and all over every page after some marked article or paragraph of special interest, and waxes profane as he finds it not. Then he curses the blundering ass who sent it, and impatiently chucks it into the waste basket. Speaking about

Wright, of the Postoffice Bazaar, has recently had a peculiar experience in that line. He had four real nice awning posts, made of iron piping the size of a horse's leg in front of his establishment. They were good to lean against or hitch animals to, and were quite useful in a variety of ways, although not particularly needed, as the awning was well braced and self-supporting. But every passing schoolboy, street gamin or juvenile Piute felt it incumbent upon him to take a climb at those posts, shinning up and sliding down them, performing numerous gymnastic varieties until they had them polished smooth. After much scolding, and adopting various devices, Wright finally put a stop to the annoyance by smearing the tops of the posts with a compound of coal tar and patent axle-grease—above where people would be liable to soil their clothes in leaning or rubbing against them. The first experimental boy came down with his hands beautifully bedaubed, but he passed no remarks. He had lots of fun watching how other boys "caught on to the racket," and Wright felicitated himself upon his ingenious success. But that very night he caught half a dozen boys industriously finishing up his job by tarring the lower part of those posts. Next day he had them taken down and put in use as sewer pipes at his residence, consequently there are now no posts in front of the Austin Postoffice, and the trouble has totally ceased.

The howling Piute doctor, heretofore mentioned in these letters, still continues faithful to his trust, and from the little Indian village on the hillside south of town his loud, doleful howlings can be heard night and day, curing the sick, bewailing the dead, and trying to stand off the devil generally. He howls himself to sleep, and wakes up with a fresh howl. Some of our Celtic fellow-citizens have dubbed him "Howly Moses." There are several dogs about town, however, which can match the doctor pretty well in the matter of howling. The ringing of a church bell brings out their talent in that line to perfection. They immediately cross themselves, as it were, sit down, and with eyes closed and noses high in air, they send forth some of the most doleful howls anybody ever heard. Yet they seem to enjoy it.

Wherefore the present disturbance in the political lodge? The aspirants have not tapped their bells or tooted their horns, yet a wild howl goes upward from the press of the State. One after another is asserted to be in the Senatorial or Congressional field, and in a politically mongrel variety of ways. Some see fit to deny the soft impeachment, while others merely pass it by as interested editorial speculations. Daggett treats his still-born nomination for United States Senator as a friendly joke, quietly gets married and goes back to far more congenial pleasures amid the yams, sugar canes and banana shades of Hawaii. He has had his experience as a Congressional nominee, and paid for it. He wanted to be Governor, subsequently, but was expressedly confident that the Central Pacific folks would not allow him the honor, and, anyhow, most infinitely and sensibly preferred the greater emoluments, financial chances and quietly effective honors of his present comfortable and influential position to any chances in that line which Nevada could offer him. Daggett learns wisdom from experience, and you could neither run nor sail fast enough to give him a Nevada nomination of any sort, neither for his own benefit nor that of the Republican party. As a straightforward Republican, he has no desire to even assist in putting up a ticket for the Democracy to beat. In the bright lexicon of partisan politics the strongest men must be placed in nomination in order that there shall be "no such word as fail." As we have before remarked, however, geographical considerations in that respect must not be ignored, and the political claims of Eastern Nevada cannot be set aside with impunity.

There is never any great howl about the mines of Austin. They are simply and regularly worked right straight along, paying their way well without any assessments, and supporting a very respectable sized and conditioned community. The ore veins are small and unreliable, but there are lots of them, and they average finely in the matter of bullion yield, as shown by the regular shipments. Thoroughly systematic, vigilant and effective management is the rule and the beneficial result. The mines of the Eureka section are stated to be showing considerable improvement of late, both in the old workings and prospecting mines.

For a man who is well fixed, or even reasonably so, Austin offers better inducements than any other town in the State—for matrimony. We have numerous eligible young ladies, and some of them have a little coin laid away in the toe of their stocking. Fuller information furnished for a liberal consideration.

Most of our Piute ladies are laying in their Winter stock of ginghams, from the proceeds of their pinenut sales. Calicoes are set aside for future reference.

Playing the catarrh has been chief among musical notes of late, and Mr. Dadd sings a beautiful song about:

Jib Fair he was his pardder;

But Job rose to be Seddador.

Mr. Dadd proposes to make a campaign song of this thing as soon as his nose gets up to concert pitch again. ALF. DOTEN. 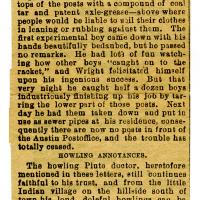