The new postage stamp law goes into effect on the 1st of next month, substituting two cent stamps, letter postage, for the regular three centers, so long in vogue. This practically disfranchises and nullifies the three cent stamps after that date, as by some strange oversight, when the new stamp law was passed, no provision was made for officially redeeming the retiring three cent stamps. There will, consequently, be some millions of dollars worth of these unfortunate stamps rendered worthless in Austin—and elsewhere throughout the United States—on that date. The effect is that everybody is working hard writing letters and getting well ahead on correspondence, in order to use up their remaining stamps so as not to have any left on hand when the fatal day arrives. Even the bar-keepers now hesitate to receive them for drinks, although they know, of course, that the next Congress will promptly correct the trouble and provide equitable redemption for the retired stamps.

The premature agitation of the Senatorial question also induces legislative speculations and prognostications. It is generally admitted that the last Legislature did not amount to much, and was to be commended for its harmlessness more than anything else, yet it being a sort of off-year in politics, so to speak, and an unimportant session, but little was expected from it. But not so with the next Legislature. It has to elect a United States Senator, to succeed Hon. J. P. Jones, which is a very responsible circumstance of itself. Primarily and fundamentally both leading political parties will make civil or official service reform and State administration economy the leading and most important feature in the contest. We have too many State officials and too many high salaries for the people to support and pay in the present condition of the State finances and resources. And so, too, with county offices and county expenses. Anything that can be done to reduce the burden of the galled and wearied taxpayers must be done, and, as before remarked, both political parties will bear this in mind, and make political capital for themselves accordingly. That's what the people think in this section, and Eastern Nevada proposes taking a lively and effective interest in the coming political campaign.

In a district like this, noted for its numerous small but rich ore veins, new and valuable strikes are naturally and frequently made known to the public, but many a nice little pocket is struck in the regular working of the mines, which are quietly worked and much acceptable coin realized therefrom without general public knowledge. Men working on "days pay" have their regular bonanza once a month, when pay day comes, but there are scores of enterprising "tributers" who cannot be hired to work for anybody but themselves. Many of these work steadily along, month after month, without realizing a cent, and dependent upon the Manhattan Company for assistance—indeed many have thus worked hopefully for years. But sooner or later they are liable to meet with the long-looked for "good time coming." This is best demonstrated, and the lucky ones indicated, by their apparent increase in financial prosperity, trips to California, the East, or to the old country. Old abandoned workings of past years are occasionally revived into practical activity under new auspices and in most instances with excellent success. Thus it was with the abandoned workings of the Plymouth shaft two or three years ago. Half a dozen well known Comstock miners took it in hand and now have lot of money. Recently a party of six, mostly former Comstock miners took a lease of the Great Eastern, which was abandoned three years ago on account of too much water, at the depth of 300 feet. They have got the water all out, and are working night and day, hoisting by means of a whim horse power arrangement. They have already met with some nice little "kidneys" of rich ore, and feel prosperous, with a very hopeful future before them. May they strike it big. The mines generally are yielding finely and looking well, there being very much more ore in sight than there was last year at this time, and everything in better shape for working. The mill is certainly having an extraordinarily long run, which bids fair to hold out for several months longer yet.

After a three months' steady, unvarying run of ninety degrees in the shade, the weather is shading off to something cooler. Austin never was healthier than during the present season. The town is very judiciously located on a series of gentle mountain slopes, the water supply is excellent, and so also is the whisky. In most parts of the town people run their slops wherever it comes handiest, regardless of all sewer arrangements. This system or lack of system might prove detrimental to the public health, were it not for a peculiar scavenger bug that generously comes to the rescue. This enterprising bug is about the size of a dried prune, has pitchfork horns, stiff, wiry legs, petrified charcoal back, no tail and an atrocious breath. He rushes about slowly, absorbing all the domestic and foreign stinks and sewage impurities, carefully digesting and retaining the same within his internal economy, and thus rendering Austin all the more healthy. He crawls about houses, sociably and searchingly, and is quiet and inoffensive unless you disturb or injure him, when you will regret it forthwith, for he just can deliberately outstink anything else in the wide world. The odor of the skunk is simply bouquet fragrance in comparison. The thrifty housewife, as well as the old pioneer, greatly admire and respect this popular bug and appreciate his sanitary qualities, as a high-flavored disinfectant.

Our friend Spykens has received a note from Professor Snider, at Las Angeles, accompanied with a package of dried orange peel, and a bottle of hair restorative from Mrs. S. The Professor says his health has not improved since marrying and leaving Austin, but Mrs. Snider, formerly the Widow McWinzle, never was healthier. The cruel, revengeful sarcasm of the widow is appreciated in view of the circumstance of Spykens having become bald-headed since being in Eastern Nevada. One day, out at Tuscarora, he was being shaved, and unguardedly allowed the barber to shampoo him. What sort of infernal mill chemicals that barber used in the process he does not know, but, anyhow, the next day most of his back hair fell off in spots, and directly he had to get him a wig to keep his head worm. In view of his having to dodge the widow's ardent matrimonial attempts upon him so lively when here, he looks upon it as live-coal cruelty on her part, sending him this bottle of hair restorative. She evidently cherishes and nourishes her revenges.

When the neighbors come in to borrow Dr. Green's saw-buck now, he astonishes by his affable cordiality. "Go take it," blandly remarks he, with a friendly wave of his hand. "You’ll fid it out in the back yard." And they do find it, and they find it's a new one, made of timbers eight inches square, set seven feet into the solid ground, and they don't get away with it, but go home over the back fence.

I received a letter yesterday from Colonel U. E. Allen, formerly of your city, and a member of the Legislature. He is now high chief purveyor of the Scoville House, the chief hotel of Waterbury, Connecticut, prosperous and happy, and sends his "everlasting blessing" to all his numerous friends in Nevada, promising to deal with them kindly should they happen to come his way. He says State Controller Hallock is in that section.

The young ladies of Austin shyly accuse their festive bachelor friend, Faddleton, of wearing a wig, when he only dyes his hair. He should rub down nearer to the roots. Perhaps he thinks he humbugs everybody but himself. But he don't. Quit it. In the lexicon of youth, verging into gray-haired maturity, never say dye.

Tom Gundry has got him a new gun. It is double-barreled, came all the way from Birmingham, England, and cost "thirty pound" there. It is the finest gun in the State, but out of place. He couldn't hit the Comstock ledge with it at forty yards. 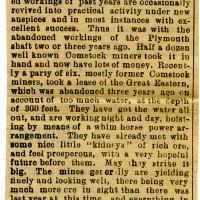