The game law restrictions being removed on the first of this month, the chief sport of this section at the present is duck shooting. All along the Humboldt, hunters live in clover, and the wild ducks and geese are being slaughtered by millions. Of course, the Piutes join in the raid, and have their full share of the fun and feast. They have the advantage of the whites in the matter, financially considered, as it costs them nothing for transportation over the railroads, but they are not any more successful, and certainly do not have any more fun than their white fellow-citizens. It is only ninety-three miles from Austin to Battle Mountain and the nearest battle-grounds or duck-shooting placers on the Humboldt, and it only costs $9 to go and $9 to return, with no extra charge for game transportation on the return trip, consequently the profits of a hunting raid can be easily imagined. Hunters from other localities may not be as expert and successful as ours, but anyhow, when Starratt, Wright, Curtis and others of our standard Austin shotgun sports make a raid down to the Humboldt, the duck just come and fall dead around them, and accompany them home by the car-load, to the great delight of their interested friends. The other day Wright and Curtis went down to Battle Mountain, where they were joined by Dunn and other congenial sports, and went up the river some eight miles to sundry little lakes among the tules. There they merely waded out into the thickets bunches or groves of tall tules and blazed away at the numerous flocks of ducks incessantly passing over; keeping their dogs busy retrieving the fowls and piling them up. They took care to make their game fall as much as possible in open water, for the convenience of the dogs, and they certainly appeared to exercise considerable judgment and discretion, for all the ducks they brought home were young, fat, juicy and nice. The hunting syndicate aforesaid own a patent canvas boat, which is about the size of a canvas-back duck, when it is shut up, but when opened and spread out it is sixteen feet long, and will carry all hands, with their baggage, bedding grub and ammunition. Moreover, it cannot be upset easily and when it hits a snag or a rock, it merely doubles up a little and bounces back. A skillful dodge with that sort of boat is to blaze away at a big flock of ducks in the air, and then, by a few vigorous strokes of the paddle, catch all of the fowls in the boat as they come rattling down.

Talking about ducks, the Senatorial game to be played next year in this State seems to be made quite an object of interest by sundry political journalists, and perhaps unduly and prematurely so in some respects. It must be borne in mind, however, that this important proposition can hardly be too maturely and actively considered for the best interests of our young, yet much-abused and humbugged State. Most anybody will do for Governor, and even comparatively poor men, financially, have always filled the various State offices, creditably and well, but Nevada requires only first-class statesmen, of real ability and vigilant energy, to represent and attend to her vital interests in the halls of Congress. Money has notoriously ruled the Senatorial choice to a very appreciable extent thus far, and no doubt is very liable to do so some more. Everybody recognizes the fact that millionaire rule is scandalously discreditable, yet that scandalous fact still obtains, and successfully remains in the political manipulation of the State. It is high time for radical improvement, and a new deal in that respect. A man of real ability as a statesman and true managing energy, in working for the vital interests and general prosperity of the State, is none the worse for being a millionaire, and if millionaire Senators are to be the established rule, let's be a little more honest and critically just to ourselves than we have been heretofore. But wherefore is the millionaire a prerequisite proposition? It certainly is not if the Senator is selected from Eastern Nevada. Thus far our United States Senatorial representatives have exclusively been chosen from the western part of the State, therefore whatever of discredit has resulted in the representation must attach to that circumstance. We have men of honest ability and political rectitude in this section, whose brains are not all in their purses (no egotistic reference to myself intended), and it might be well to look in this direction in the coming new deal, bearing in mind that most of our best, most popular and efficient State officers have been selected from Eastern Nevada. Anyhow, if the Republican party would win the coming Senatorial race they must put their politically strongest and best horse on the track, whether from Eureka, Gold Hill or Candelaria.

The great fuss being made over the driving of the "last spike" on the Northern Pacific Railroad is merely on a par with the same humbug ceremony at other points heretofore, and doubtless to be followed up hereafter. Yet why crow any more over the last than over the first spike? In all other public works, except railroads and bridges, the commencement and not the completion is what is celebrated. The laying of the corner-stone is considered of more importance than the laying of the last brick. Moreover, those so-called "last spikes" are invariably a fraud. They are of silver or gold, and are never left driven. A hole is carefully bored, into which the precious spike is gently tapped with a silver hammer or fancy little sledge, by somebody who never knew a railroad spike from a carpet tack, amid the popping of champagne and other hifalutin remarks, and when the fuss is over, and the officials leave the spot they judiciously take that same last spike along with them. It would not pay to leave it in the hole. The real "last spike" is of iron, driven by a sweat-scented workman, and it stays there. The "last spike" of the Central and Union Pacific Railroad was made of Comstock bullion, by Ruhling & Co., assayers, of your city. It was purposely made some two or three inches too long, and the surplus was chopped up into little bits and given away among personal friends as cabinet souvenirs; the spike itself is probably preserved as a relic in the Central Pacific Railroad office at San Francisco. Had it been risked to the honest of the Ogdenites it would have been extracted and shoved up for whisky for the crowd in less than half an hour after the "last spike" driving ceremony was over.

Our mutual friend Spykens still cherishes his two-inch bonanza of $20,000 ore, although it does not pan out quite so big and rich as further sunk upon. He is the most hopeful man in the world, however, and his mind's eye reaches away down into the dim bowels of the earth and sees it widen and roll out tons upon tons of rich ore and resultant bullion bars. He sees the lovely ruby silver in long red streaks and pockets away down there between the pinching, hard-hearted granite walls, and he is building many castles in the air from his prospective bullion bricks. He even looks ahead to the time when he shall marry a schoolmarm and have all his children born with a good education. Ah, well, so it goes.

The choicest, sweetest dream in life

The pine-nut season is now in full feather, and the dusky Piute, lousy Shoshone and their "se-quaws" and other relatives have largely hied them away to the shady, green groves, there to gather the esculently excellent and long-admired pine-nut. This small, but numerous, nut has always constituted a staple article of food with the aboriginal inhabitants of Nevada. The effect is, at this season of the year, that the Indians are particularly independent, and don't care whether the white man's domestic stove-wood is left properly sawed and split, or his family washing done in time or not. The lordly Piute Chieftan, with eleven sacks of pine-nuts piled up in his campoodie, feels himself the financial equal of John Mackay, and from now until the cold Winter weather and solid snow and ice sets in, there is no implicit reliance to be placed upon Piute contracts for work or domestic service. Anyhow, they won't allow you to sass them for the next two or three months. But from about the middle of December, and all the long, cold Winter, while chances near the stove, and odds and ends of white folks' grub, served up hot, are coveted by them, your Indian friends, acquaintances and distant relatives are always and really too willing to cultivate your most intimate acquaintance.

Chung Wah, the one-eyed Chinaman down near the brewery, has sold out his hog ranch and will leave on the next steamer for China. He has made numerous friends during his twenty years' residence here, etc. He has been a constant reader of the San Francisco society papers for years, although they have never hardly even mentioned him

Stillwater Thompson's youngest daughter is getting along well with her lessons in washing, and ably represents her mother in the regular Monday washing contract, while family are off after pine-nuts.

Broken-Nosed Charley and Jerry Kelly have subsided into obscurity since Dave Dunlap became Sheriff, and have gone to the Springs to recuperate.

Weather clear and auspiciously suspicious, but liable to change. 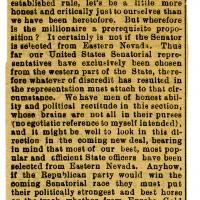