Yesterday sullen thunder growled ominously along the Toiyabe range, and great kidney-shaped clouds wrestled with each other till they were black in the face, trying to produce a big rain, but their constipated condition would only allow of a few respectable showers, enough to lay the dust in the streets pretty well. Down in the valley, however, the rain poured heavily, as is required in order to keep famous Reese river up to its normal standard among running streams. The old pioneer took a fresh chaw of tobacco, and shook his head reminiscently as the big rain drops fell, and Tony Gandolfo smiled hilariously over the prospect of a regular '78 cloudburst and flood. All up and down Main street everybody got their little floodgates ready to place in the doorways, and all seemed a little disappointed when the threatening storm rolled by with no adequate result. A genuine cloudburst and flood, like that of August, '78, would create a sensation here now equal to a first-class circus. Mr. Dadd sagely remarks that it's getting a little late for the August cloudburst, yet that all hope need not be abandoned for the next two or three weeks. There is considerable difference between a cloudburst and a waterspout, although they are frequently spoken of as one and the same thing. The first is merely the meeting collision of two overloaded thunder storm clouds and a consequent sudden letting go of their watery contents down upon the earth beneath. This is naturally liable to occur about the heads of mountain canyons or ravines. A waterspout is simply a whirlwind of great or lesser magnitude which goes sweeping along over sea or land, licking and drawing hungrily upward anything it meets on the surface. At sea they thus form a fiercely seething column of water, dangerous to encounter, and on land, as they sweep across the plains, whirling sand and dirt skyward, if they encounter a river, pond or lake they pause in their reckless career to take a good, congenial drink for distribution elsewhere. The Mexicans call them "culebras de agua," or water snakes, from their wavy, snaky motion as they sweep their tails along the surface. The greater weight of water met with in passing along is what causes them to go slower than when sweeping across sandy plains or valleys. Now if their course could only be managed or controlled by artificial means their immense power might be turned into practical use. For instance, if one good, healthy waterspout could be induced to drop its suction down the main Yellow Jacket shaft, all the water in the flooded Gold Hill mines would be drawn up into the clouds in five minutes, and those submerged lower levels left as dry as a sucked orange.

The Reno Gazette does Mrs. Sandy Bowers a rank injustice in stating that she deserted the famous Bowers Mansion a month or two after her husband died, and "moved into a little cabin hard by, where she made her living telling fortunes." Hundreds of people can tell the Gazette that the old lady did nothing of the ort. She occupied the Mansion itself for years afterward as landlady, receiving paying visitors, renting it out to picnic parties and making it a source of private revenue to a considerable extent. And many a thirsty picnicker remembers the cups of tea and coffee they succeeded in procuring from her, as a special favor, at two bits each; water free, but predominant. If Sandy Bowers had left his financial affairs better regulated, the old lady would be in the same line of business yet. It is true that she has, since evacuating the Mansion, established quite a lively reputation as a Spiritualistic fortune teller, seeress and all that sort of thing, and is still at the same, but she picks up plenty of pocket money at it, and anything but a "precarious living." Some of her predictions have been literally, squarely (and unavoidably) verified, but numerous others have not, by a long chalk, and never can be, but then she is very hard of hearing, not being able to distinguish the jingle of a quarter from the ringing of a church bell for the last thirty years.

The thermometer here in Austin has stood at about ninety degrees for the last three months, and quite often nearer 100, yet everybody has seemed healthier for it, and no doubt the heat could have been gradually increased 100 degrees more without material discomfort, and only to be recognized and appreciated as a preparatory seasoning for the hereafter. There is no doubt of the efficacy of heat as a purifier. We never hear of diseases in Tophet. But Pasteur, the famous French physiological savant, carries the idea too far for this world. He sets forth that all water for drinking or toilet purposes must be boiled, in order to kill the disease germs with which it is saturated. Even the cooking utensils, eating apparatus, etc., he insists should be roasted in an oven before using. Would such a style of life be worth living? Better defer it for the hereafter. Hot whiskies, etc., are correct enough in cold weather, the disease germs in the water being properly disposed of, but the idea that a man must drink boiling water, eat red-hot food and breathe air from a blast furnace in order to eternally avoid disease germs is simply and uncomfortably ridiculous. It is infernal nonsense.

Speaking about the hereafter, "Stillwater Thompson," one of our Austin Piute savants, tells me that the Piutes do not believe in the "happy hunting grounds" proposition at all. They have no faith in any such felicitous reservation being set apart for them in the next world. They have seen too much of this reservation business in this world already to have any sort of affectionate confidence in it as an after-death resort. The sum and practical substance of the Piute religion consists in standing off the devil. When sickness comes they know the devil is among them, and they put all their medicine men, good, bad and indifferent, upon his track. If they can succeed in howling him off, or neutralizing his infernal influences, by their "howly" rites and efforts, these aboriginal medicos feel creditably triumphant. They say the Shoshone have no God, and must all eventually be absorbed and wiped out by the devil, who has already secured a vast majority of them, so that very few are not to be seen among us. Thompson says the good God of the Piutes is named Pah-ka. I thought, perhaps, he mistakenly referred to Hub Parker, of Carson, but he earnestly protested that, although Carson was "pooty good," there was no God at all there, and never would be.

Sunday evening the Austin Chinese residents wound up a three-days' celebration of the closing of the Triennial Conclave at San Francisco, and the whipping of the French by the Chinese troops in their raid on the Flowery Kingdom. Sam Kee, the well-known washman, says the French have no show whatever; that the Chinese outnumber them a thousand to one, and will simply pile on and overrun them like the fatal swarming lice in Egypt. Even as a last resort, a million or two can go and commit suicide in the French camp and just stink the confounded frog-eaters out of the country. The French have a very bad job on their hands, filthy and discouraging. It is worse than fighting skunks.

Spykens says the crumb-pickers, here in Austin, remind him of thousands of people who get a good living picking up the crumbs which fall from the rich man's table. Lazarus is the first instance of the kind on record. He is also recorded as the first man licked by a dog. He had his reasons for this, however, for although he doubtless had "sand enough in his craw," he had too many sores on his back, therefore being licked by dogs was simply an economical sanitary proposition for him, although perhaps a little rough on the dogs. Spykens was not a success as a dump-picker, and is now busily engaged in trying to invent a new motive power to wind up his Waterbury watch.

Captain Charley and wife, and their daughter Hattie, are gathering pine-nuts down near Stillwater. Other Piutes state that they dare not come back to Austin again by reason of their family meanness and disreputable conduct.

Some of the Conclavers from Austin are getting back, and look as if they had been well treated by the shrimp and doughnut pirates of the Bay. 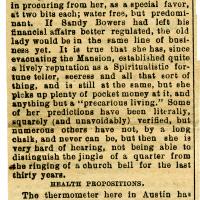