"Now see here," said Mr. Dadd, last evening, "here's a proposition I want explained. It’s a well-known and established fact that a sagehen hain’t got no gizzard, like other birds—nothing but a sort of maw; no gizzard at all. I’m an old hunter and know a sagehen from a grouse and a hawk from a hand-saw, but blow me if I can reconcile all the discrepancies of newspaper talk. In the last year or two the papers have been tellin’ about the mines of Gold Hill bein’ flooded with water fillin’ ‘em up over a thousand feet, and now the same papers say them same mines has to shut down from lack of water to mill the ore. How’s that?"

"Yes, but the water simply floods the lower levels, and the ore is all being taken from the old upper workings, near the surface. This ore has to be taken down to the mills on Carson River for reduction. The river is always low at this season, but is lower than usual at present. That’s what's the matter."

"Haven’t they got any pumps in them mines?"

"Certainly; some of the finest and most powerful in the world are to be found in the hoisting works of the Comstock; pumps that are capable of raising a perfect deluge, and which can get that water out whenever the controlling managers see fit to have it done."

"They can, hey; then why the devil don’t they just turn their hoistin' works into quartz mills, and so raise the water and mill the ore all at one lick?" And the festive old Reese River pioneer gave a vigorous puff of his pipe, like a high-pressure Mississippi steamboat, as he wheeled around and strode off down street.

How long fish may grow to be has been definitely ascertained and established long ago, but how long they may live has never been statistically represented and set down. The famous eyeless fish of the Mammoth Cave, Kentucky, and elsewhere in subterranean waters are well enough in their way. They never required eyes, consequently were not provided with those useful appendages, so useful to the horse buyer and other stock dealers, but here in Austin we have fish, who, "having eyes see not," and have not for the last sixteen years. Across the street from the Reveille office is a little old wooden building, bearing the pretentious sign legend of "United States Bakery." It never baked the United States, but in times past furnished bread for the Austin portion of the Republic. At the rear end of the bakery is a good sized tunnel excavation, about thirty feet in length, in the solid granite. It was made in the early days, and has been in use ever since, forming a very nice cool vault. In excavating this cellar or tunnel, near the back end or face, a small spring of pure cold water was struck, which flowed up through a crevice in the solid rock floor, and furnished a valuable supply for the bakery as well as for some of the neighbors. It has continued flowing ever since. A hole about three feet long, two wide and a foot deep, was made in the rock for the spring, which was kept covered with planks. Early in 1867 the proprietor one day procured a dozen small fish from Reese river, alive, and put them in this spring. They were of the red-streaked sucker variety, six or seven inches in length, and took very kindly to their quiet, dark little prison. This was sixteen years ago. Subsequently some died or were given away, and now only two are left. They still retain the same size, none of them having grown any longer, these two remaining being six or seven inches in length. There being no flies or any other species of insect in that cold, dark, closely shut spring, and no other food having ever been given them, these solitary confined little fish have merely subsisted on the clear running water, something which no other old Reese River Pioneer is able to brag of. There being rarely ever any occasion to remove the cover of the spring, hese little fish have never seen sunlight and scarcely even daylight for over sixteen tears. A new wooden boxing was put into the spring some four or five years ago, since which time it has not been disturbed. Of course no one may know how old these fish were when taken from the river, but they had evidently attained their full growth. Owing to the total darkness and seclusion in which they live, they look faded and old, but they have not lost the use of their eyes, and bid fair to outlive any of the two-legged Reese River Pioneers by a few hundred years or more.

All who went from Austin to the grand Conclave at San Francisco report having a glorious good time in that Coty of Sin by the Golden Gate, and express no desire to come back yet. We read the elaborately glowing telegraphic accounts of the magnificent racket, and feel sympathizingly happy and excited. When our three Knights from Austin—Mc Kenney, Williamson and Nicholls—return, a grand reception awaits them. Everybody will be en masse; the Lander Brass Band will play "When Johnny Comes Marching Home," and other national airs and those Knights have got to march up Main street from the cars, doing the Conclave procession same as they did it at the Bay. Williamson must lead off as Commander of the Commandery, and the other two may follow in regular platoons and divisions. Austin’s subclavian artery throbs for the Conclave, and must have some of it.

GAMBRINUS ON A BUST.

Our local brewer of beer, whose name is Gus. Bauer, sometimes astonishes even himself in some things. On the 11th of June last he got a keg of double-extra good beer into his delivery wagon among the rest, and was passing along one of the upper streets, when suddenly a trouble occurred. The safety valve of that particular keg blew out, and created a serious commotion. All the other kegs went immediately overboard, and left room for that one keg to send a ferocious stream up about forty feet. The side wind of it blew Gus. off his seat, and a paralyzing stream went upward, baptizing the whole neighborhood. It subsided directly, and as soon as possible Gus. pulled that keg out of his wagon. There was only one gallon out of the twenty left in it, and that he gave to an old lady who lived close by, and who with the other astonished neighbors had witnessed the calamity. The beer looked flat and innocent enough then, and she put it into five bottles. That same night four of them blew out their corks, upsetting a shelf full of crockery above them, and sounding like the Fourth of July. She got a bit of baling rope over the cork of the fifth bottle, made a clove hitch around the neck, two turns under the bottom, and then hauled taut and belayed the end to one of the corner timbers of the cellar. Then she barricaded it safely with stove-wood and dry goods boxes, and sent for Gus. to come and take it away. But no; he delights in keeping her terrorized, and she wants to sell out and leave.

Perhaps you Comstockers may be in the full enjoyment of choice, tender sirloin and porterhouse steaks, and perhaps you may not, but here in Eastern Nevada is where the fullest enjoyment of those coveted luxuries are best to be had at the present time. The feed everywhere is excellent, and the quality of the beef and mutton is consequently “away up” in quality, yet not unusually so in price. The people of Austin are getting fat on good meat. Why shouldn’t they? Here’s where it grows. Yet everybody may not have the requisite coin to buy with. Our butchers, however, are liberally benevolent, and allow nobody to starve. Sometimes I think the butcher is the truest and purest charity man in any community, generally speaking. He is always giving away something substantial and nourishing in the way of meat scraps, soup bones, liver or something of the sort, that poor, impecunious humanity stands in need of. The lordly Piute chieftain always respects the boss of the meat shop, and even the hungry yellow dog does not always appeal to him in vain. 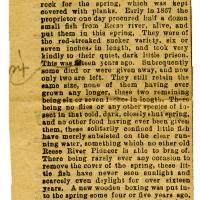