For several days past ponderous clouds and deep muttering thunder, raging angrily across the timid blue sky, have given ominous portent of the coming cloud burst, but as yet the aforesaid cometh not. Each day the old Reese River Pioneer cocks his weather eye up at the troubled afternoon sky, and promisingly shakes his grizzled locks as he tells you about the terrible cloud burst and flood of August, ’78, which just swept Austin from head to foot. And all along Main street the store and saloon keepers get their little flood gates ready to place in their doorways to keep out any repetition of the aqueous-fluvial calamity which so detrimentally invaded their premises on that memorable occasion. The Johnny-come-latelies and tenderfeet, gazing philosophically upon the daily threatening sky, laugh scornfully at the few drops of rain reluctantly squeezed out, refuse to believe that there ever was any cloud burst here at all, and are willing to believe that the whole disastrous yarn is a diseased dream of the old R. R. P. aforesaid. And the old R. R. P. secretly hopes that a devil of a cloud burst will come soon, to vindicate his veracity and the honor of the town.

The people of Austin seem more careful as regards precautionary measures against conflagrations than anywhere else in the known world. Foul or defective stovepipes and chimneys create frequent fire alarms in all wide-awake communities, but not so here. Maybe the wood does not form any inflammable scale or soot, on the inside of the stovepipes, or the people themselves do not feel able to afford the luxury of being burned out, and therefore are more careful than the people of other communities. Our Volunteer Fire Department is well organized, and prepared ready for a rush at the first tap or toot of a fire alarm, but for nearly three years past not so much as a China wash-house or a Summer kitchen has called for the hose-carts to roll. There are plenty of hydrants advantageously distributed, plenty of good hose, plenty of water and plenty of active and experienced firemen, but nothing in that line is ever needed any more. A fire at the Manhattan mill could easily prove an extremely serious disaster to the mining and all other interests of this place and section. The buildings, consisting of machine shops, foundry, coal house and other extensive buildings connected with the mill itself, would culminate in a huge mass of destruction, were it allowed a fair show to that effect. But ample preparations are made against any such disagreeable possibility. Four hydrants, of the most approved style, with the best of carbolized hose attached, or ready to attach, are placed at the most advantageous points. Under a pressure of 285 feet, from the tank or reservoir at the Oregon shaft, streams from these hydrants can be thrown over any of the buildings. A powerful steam pump, connected with the main engine of the mill, can also throw two heavy streams, if desired. Hose Company, No. 2, of the Austin Fire Department, also have their apparatus housed near by, ready to run at a moment’s warning. It would get the advantage, in face of all these precautionary and effective preparations.

Owing to the great loss of sulphurets by the ordinary wet milling process, the mills of the Comstock have only assured the working of ore up to sixty-five or seventy per cent. of its assay value, the rest passing off in the tailings. Here, at the Manhattan mill, the dry crushing and Stedefeldt chlorination process works the ore up to a much more satisfactory figure, eighty and eighty-two per cent. of the assay value being allowed by the company for the ores milled. This chlorination process completely destroys all the sulphurets, converting the pulverized ore into chloride. In this state it readily yields up its silver, and the loss on the tailings, flue-dust, etc., is comparatively trifling. In fact the tailings are too poor to be considered of any value. About 600 tons a month is the regular working rate of the mill.

The ore in some of the characteristically small veins of this district are concentratedly and remarkably rich. Two and three thousand dollars per ton is not at all uncommon. Among the richest was a lot of twenty or thirty tons from the Dollarhide mine in 1875, the first-class of which worked $5,050 per ton, and the second-class over $1,000 per ton. On the 30th of last month a small lot from Cassidy’s Homego mine, Yankee Blade, yielded at the rate of $5,000 per ton. About $250 or $300 per ton, however, are the average milling figures. Since the first discovery of the mines of this district, twenty years ago, down to the present time the total bullion yield has amounted to over $20,000,000. During the working management of the Manhattan Company, a period of sixteen years, the mill has turned out to date the handsome sum of $16,052,414 25, and it is still sending forth the clean silver bullion bricks at the rate of a million dollars a year. This represents the total yield of Reese River District. The present condition and prospects of the mines warrant a continuance of the same prosperous yield for years to come.

Since the Manhattan Company has had the principal control and management of the mining situation here, substantial, well-grounded property has been the feature, and Austin still continues on a firm basis of general prosperity. Very few idle men are to be seen, regular standard mining wages are paid and things go along like clockwork. The company has paid dividends in times past, and perhaps may again in the sweet by and by, but considering the fact that these, unlike the Comstock, are purely silver mines, with no gold, it is pretty good to be able to square accounts liberally and keep going ahead all right. Especially so in the face of the long-continued twenty per cent. discount on silver, which would make a pretty good monthly dividend of itself. The cost of transportation to and from this isolated locality is no small item in the way of expense, but the main feature in practical mining operations here consists in sinking shafts and inclines, with competent surface works, at heavy expense, to reach and develop rich but very small ore veins which are unreliable in their general situation and character, and always calling for new and expensive explorations. A large proportion of the ores reduced at the mill are custom and tribute ores, and indeed had it not been for the adoption of the tribute system it is a question as to whether the mines generally might not have been a dead financial failure long ago. A large amount of dead work has constantly to be done, the management, very judiciously, while working present ore development, never failing to keep prospecting for more in the most promising direction. Moreover, a competent reserve fund has always to be kept on hand against occasional backsets and to tide over all adverse possibilities and contingencies. Thus it is that no assessments have to be levied, and present prosperity is more in favor of dividends than assessments. Few companies of any kind on the American continent are as systematically and judiciously managed, and operate as beneficially for the community amid which it exists.

The most disreputable institution in the country now is the Western Union Telegraph. The Associated Press dispatches were bad enough before, but since the great strike of the operators, they have become totally unreliable. Everybody used to remark what a liar the telegraph was, and now it necessarily has to subside into a helpless, hopeless state of moral mendacity, with nobody so poor as to do it reverence. Universal American sympathy is with the striking operators. Here in Austin we have only one, but he is a public object of interest, and we all sympathize with him. He is quiet and says nothing, which makes the public sympathy all the more intense. Should he conclude to send a blue streak of electro-dynamite through the wire and blow Jay Gould or any other bloated monopolist straight into the infernal regions, the people of Austin will unanimously applaud and indorse him.

The Piutes residing on the hill-slopes, both sides of town, are in serious trouble. Bowel complaint, diphtheria, fever and other styles of sickness are among them, and they are losing quite a number, especially children, by death. The poor old medicine man has worked himself nearly to death, and howled himself hoarse, trying to cure or ward off these diseases, but now lies down and rolls in agonies of despair. They bury their dead and move their campoodies, but sickness and death follow them. Many are leaving for Humboldt and Walker as fast as the railroad will deadhead them through.

The three hunters from Austin, Allen, Mason and Craycroft, mentioned in my last letter as having been arrested and jailed in Grantsville, Nye county, for violation of the Game law, have got back to Austin. They got out of the scrape by special and ingenious diplomacy. The day their trial came up before the Justice of the Peace they went to $9 expense, and deliberately got every man in Grantsville, except the Sheriff and Justice, blind drunk. The witnesses for the prosecution magnanimously swore they didn’t know anything about the case, and the jury hilariously pronounced them "puffeckly in (hic) scent," declaring that this arrest was an outrage on American civilization. Allen is going to run for Governor next time and considers Grantsville already canvassed in his favor. Anyhow he knows it will only cost $9 to canvass it again whenever he sees fit. 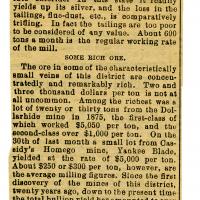