A ponderous bit of sensational news comes from the headwaters of Reese river. Three of Austin’s best-known citizens have been caught out, bounced and outrageously dealt with. No blood has been shed as yet, but how much may be is merely a matter of time and quantity. The way of it is this: The other day the three prominent Austinites aforesaid—Allen, Mason and Craycroft—went on a hunting expedition up stream. They were well fitted out with beverage, grub, ammunition, fishing lines, fry-pans, blankets, and a nice two—horse outfit, and expected to have a continuous game feast for three weeks. They found suckers and trout enough in the river, but wild fowl and small game were not at all plenty. Unconsciously and innocently they strayed onward and upward, and got over the line into Nye county. Suddenly a force of armed men pounced upon them, and they found themselves in the hands of a Sheriff and posse, arrested on charge of violating the game law. Such an idea never struck them while they were within the borders of Lander county, but the vigilant officials of Nye saw and improved their opportunity. Our three hunters were ruthlessly dragged off to the bastille in Grantsville, and all their property, beverage and all, confiscated. At last accounts they were rigidly held in durance vile, and had sent here for some of their friends to bail them out. They are apparently in a bad scrape, but will doubtless be able to prove that with all their shooting they killed no wild game. If tame ducks and calf meat have really been found in their possession, however, they or their friends may be made to contribute heavily to the financial resources of Nye county. But they are all gentlemen of undoubted personal courage, and if they have been imposed upon by this matter, nothing but blood can wipe out the foul insult. Further intelligence from Grantsville Jail is anxiously looked for.

For nearly nine months the Manhattan mill has been running almost continuously, and the present run will be recorded s the longest it has ever made. Being the only working mill in the district, all the ore produced from the mines of Austin and vicinity are brought to it for reduction, and some lots even come from a considerable distance. Jefferson Canyon, for instance, seventy-five miles away. It is a dry-crushing, twenty-stamp mill, and works the ores by the Stedefeldt process. Each of the twenty stamps weighs 1,000 pounds, and strikes nearly 100 blows a minute, making the dust fly at an extremely lively rate. When so many separate lots of ore are brought in from the various mines and localities for working, a very complete and careful system is called into requisition to keep them separate from each other until they have got through the batteries. And this is done very effectually and satisfactorily. The twenty stamps are arranged in four batteries of five stamps each, working side by side, thus allowing four separate and distinct lots of ore to be milled at one and the same time, if required. By frequent sampling of the pulp, as it passes through the battery screens in the shape of a dry powder as fine as flour, the assay value of each separate lot is ascertained and its bullion yield determined. Thus each battery can be run on separate and independent lots of ore, or all four be employed on a single large lot. After passing the batteries, however, separate working cease, the pulp being carried forward collectively through the rest of the process.

From the batteries the pulp passes forward to where a small two-stamp battery supplies it with pulverized salt, and it is mechanically mixed therewith to the extent of ten per cent., more or less, according to the richness of the ore, the richest ore requiring the most salt. Thence it passes through an elevator to the top of the chimney-like furnace, and these screens, mechanically moving past each other, allow the pulp to sift and drop evenly down through forty-eight feet of fire flame to the bottom. This is a decidedly hot fire, created by two charcoal furnaces, on opposite sides, near the base. The heaviest and principal portion of the pulp dropping down through this column of fire, experiences the chlorination process in so doing, and falls in a red hot pile at the bottom, changed from its sulphuret character to a chloride. Thence it is drawn or hoed out through a small door, every hour, for transfer to the pan and amalgamation department.

Although, as before remarked, the heaviest and principal portion of the pulp drops to the bottom of the furnace, a considerable and valuable portion is carried elsewhere by the force and draught of the flaming furnace. The flue turns just beneath the pulp screen, at the top, and passes downward and backward through a series of dust chambers, contained in a substantial brick structure seventy feet long by sixteen wide and ten or twelve feet high. There are sixteen of these chambers or compartments, and the flame and head of the furnace, laden with light, rich ore dust, passes zigzag through the entire series, and thence through outside passages to a huge brick chimney eighty-five feet high, which finally carries the heat and smoke to join the general atmosphere, the distance thus intrisically traversed by it from the furnace being over 500 feet. This, of course, is to give the pulp a chance to settle. Through convenient doors in the dust chambers and passages the captured pulp is drawn out once a month and taken to the pans. And it furnishes the finest of the bullion. This Stedefeldt furnace was the second erected in the State, the first being at the Auburn mill, near Reno.

From the furnace the chlorinated and chloridized pulp, after being cooled somewhat, is run on cars into the pan room near by. This department contains eight pans. With a settler to each. The pans are five feet in diameter by two and a half feet deep, and are simply plain pans with wooden sides and iron bottoms, and provided with the usual style of mullers, making sixty-eight revolutions a minute. The settlers are similar in style, six feet in diameter, with wooden mullers or agitators, making fifteen revolutions a minute. Each pan works a ton at a charge, occupying eight hours for each charge, or three charges every twenty-four hours. About 600 pounds of quicksilver are used to each charge, and even up to 1,000 or more in case the ore is unusually rich. More or less salt, as required, is also used in the pans, together with cyanide of potassium, scraps and borings of iron and other desirable chemical agents. The amalgam is all placed in a large and very substantial cast-iron strainer and the surplus quicksilver very speedily forced out of it by hydraulic pressure. The

Department, which adjoins the pan room, is very conveniently [illegible] and certainly gives very gratifying results. It contains three large retorts and two melting furnaces, and every day or two, according to the richness of the ore worked, turns out a shipment of ten nice bricks of silver bullion worth a thousand dollars each. Charles Durning is Superintendent of the mill, and has been for many years, having been an active and respected resident of Austin since 1864. It keeps him pretty busy looking out for the different departments of the institution under his charge, but he is fully equal to the task, and understands his business.

Running the entire mill, as well as furnishing power to some other outside arrangements, is supplied by one of the best and most effective steam engines in this section. It is a Putnam valve horizontal engine with eighteen-inch cylinder and forty-two-inch stroke, rated at 140 horse power. The fly wheel is eighteen feet in diameter, and weighs 14,000 pounds. This engine is from the Union Iron Works, San Francisco, and with its bed, eighteen feet long, must have been a very ponderous affair to freight over the Sierra and across the flats before the advent of the railroad. The boiler room contains three pairs of tubular boilers, two sets of them in constant use and the third kept in reserve. One very effective feature here consists in the recent adoption of six-inch upright columns of team pipes, nine on each side of the fire boxes or furnaces. These are connected with the boilers, and are of very important assistance in getting up steam. There is no trouble in getting up all the steam required, and more, too. A great saving of fuel is also effected. About seven cords of nutpine wood are burned daily. The Chief Engineer in charge of this department is Eph. Wagar, and he takes a very evident degree of pride in it.

The numerous mining works naturally created a demand for an establishment right here where repairing could be done and machinery made without having to send hundreds of miles for that purpose. The result was that from a small blacksmith shop the present extensive and very complete establishment has grown by frequent and judicious additions. It contains big forges, a steam hammer, lathes, planers, turning, drilling and sawing machines, all of the latest patterns and the most substantial description, and any work required can be turned out at short notice, from a six-foot hoisting reel to a big steam engine. Moreover, as has been before remarked, just as well finished and effective work can be turned out of these shops as from any establishment this side of San Francisco. A. E. Johnson is the master mechanic in charge of this department, and under his efficient supervision constant improvement is shown.

Which is conveniently situated near by, is under the charge of James Lovell, a very competent and skillful workman. It is not so extensive as some of the San Francisco foundries, but what work it does turn out is first-class and fully up to the requirements. It was a good idea on the part of the Manhattan company to thus establish their own shops where they could do all their own work as required and make all necessary repairs instead of having to send so far away in case of accident or for any new work required. The necessities of the isolated situation, however, prompted the practical adoption of the idea.

The assay office of the company, across the road from the mill, is properly furnished in all its details, and is engineered by Jacob Trolson, who also acts, when occasion requires, as surveyor in and about the mines. The main office of the company, also near the mill, is a very unpretentious structure, but a large amount of very responsible business is transacted therein. M. J. Farrell is chief clerk in charge and has been for numerous years. John Frost, the old original locator of the mines, still presides over them in the capacity of Superintendent of the machinery of the various works, both above and below ground, and is a very efficient man for that responsible position. The whole mines, mil, workshops and all connected with the Manhattan Company, are under the superintendence of Melville Curtis, a very wide awake sort of a gentleman. His work and success tells its own story. 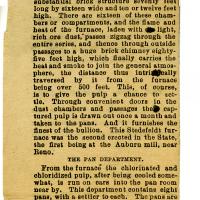