Unusually glorious was the celebration of the recent Fourth in Austin. That proud National day has been celebrated here in good style many times, but never quite equal to this time. Our mining and other interests have shown increased prosperity and promise during the past year, therefore a better feeling and desire to celebrate on this occasion was the natural result. Many people were in from the ranches and neighboring mining camps, and for the time our little old town did look right lively. Austin is rather of a pretty place for this section, and added to the green shade trees and shrubbery about the private residences were extensive rows of young pines and cottonwoods ranged liberally all along each side of the main street, every awning post being thus adorned. Flags fluttered in affluent abundance, Comstock style, and when you come to firecrackers, bombs and similar heathen explosives, here’s where we had them. The various fancy goods dealers had laid in unreasonably heavy supplies of these things, yet fell short after all in supplying the demand. All the previous night, and all the day celebrated, there was an incessant rattle and fizz. Cannon firing National salutes added to the general rumble and roar, and the pouring rain of firecrackers, until the air was thick and heavy with the stench of villainous gunpowder, and noisy dynamite patriotically destroyed, and a cloud obscured Reese River Valley all next day. Firecracker popping was never more popular. And the Chinese were only too glad of a pretext for turning things loose, and the way they did fumigate the filth, and blow out the stench of their quarter, was perfectly refreshing, after the style of your old grandmother burning a rag in a room where there is a bad smell.

As I have before remarked, there is plenty of musical talent in Austin. Every other man is a singer or an instrumental musician, and it was here that Emma Nevada developed her wonderful powers as a singer and went forth to conquer the operatic European world. We have two brass bands, two string bands, and material for half a dozen more bands if required. The Chinese band has a new instrument introduced into it; a sort of cross between a hewgag and an insane tom cat, and the old Confucius who runs it tried to ring the changes on it on the Fourth, but had too much opium and rice brandy in him. The band got on the porch of the little Chinese temple, however, and played all day. There are three shifts in the band, consequently no let up after they start in. The drummer is a whole corps in himself, and a perfect stem-winder. The others may stop to drink, smoke or eat, but he, never. He is the most exasperatingly persistent wretch in the world, and all the neighbors would be serenely happy if the drummer law was rigidly enforced in his case. And these Chinese outshone everybody else in the matter of flags on the Fourth. The big red dragon flag and several long streamers floated from the pole of their temple, surmounted with a big square green banner. It looked some like a Chinese war junk under full sail.

Our Fourth of July procession was not quite as long as the generality of yours on the Comstock, there being only about 600 in line, including the Miners’ Union, civil societies, military, firemen, children and citizens generally. But it contained one very novel and effective feature—it was probably the only procession in the United States where the Car of State was drawn by a locomotive. The grade of the railroad which passes up through the main street of the town from the depot of the Nevada Central, is twelve and one-half feet to the hundred (not one foot in eight, as has been incorrectly stated), and being on the natural route of the procession, the locomotive and cars were utilized to most excellent and peculiarly effective advantage. Only two cars were used. These were flats, fitted up with awnings, etc., one for the Car of State and the other for children generally. The States were represented by the prettiest little girls in town, appropriately dressed, Miss Maggie Burchfield personating the Goddess of Liberty most angelically and tastefully. All went smooth and easy enough going down the steep grade, the brakes being in very competent and responsible hands, but many mechanically appreciative individuals were curious to see how it would be in coming up—whether the speed could be regulated to the pace of the procession marching before and behind. But that gallant little motor, weighing 33,000 pounds, just worked its way up the steepest plain railroad in the country slowly, carefully, with the precision of clockwork, and regulated exactly to the gait of the procession. There was no difficulty whatever about it. You doubtless had numerous Indians in your procession, but our one engine could certainly have got away with all of yours.

The exercises were first-rate throughout, with the exception of the poem, and the oration of Dr. Hammond could not be beaten anywhere, neither in matter nor style of delivery. Judge McKenney, as President of the Day, had a tough little episode in his opening remarks. Just as he commenced, a huge lot of firecrackers were tumbled into the street a short distance below the stand and made a tremendous racket. The Judge faced the music, however, most unflinchingly. He could not hear himself talk, but knew he was talking. It was nip and tuck for awhile, but he finally outwinded the crackers, and made some of his remarks heard. The hoodlum turnout and procession in the afternoon was very funny, and many, especially the youngsters, considered it the best part of the celebration. The Goddess had a quartz wagon all to herself, and it took two yoke of oxen to haul the big gun. Those oxen came across the plains in ’49, and never can look any older.

The festivities were not marred by any disagreeable incidents; everything was excellently managed, and the ball given by the Society of Reese River Pioneers, at International Hall, in the evening, was well attended. They give a ball every year—not for profit, but merely as annual landmarks along down the banks of the River Time, recording their progress as they drift down stream toward the broad sea of eternity. And these balls are annual tests of endurance, correctly indicating how the natural powers of the old stiffs are holding out. One by one they fail to step out on the floor when the dance is called and the fiddles sound, and those who yet continue to respond are not as limber in the knees and ankles as they used to be. But they can lie just as hard as ever when they expatiate to you about what splendid dancers they used to be; the way they did the double shuffle, sailors’ hornpipe and all that sort of thing. Their double shuffle was done with cards principally, and their hornpipe was more like a tobacco pipe. It’s comical sometimes to hear one of these bald-headed old reprobates tell about how he danced the Highland Fling, when we know all the time that he never even saw it, except from the orchestra seats of a melodeon. One of them at this ball, after telling me a lot of yarns about his former dancing achievement, got on the floor with the prettiest young lady in the hall, having the vanity to think he could work through a plain quadrille. He got caught out, though, on the first turn, and retired in confusion. “No use,” remarked the old rooster, apologetically, “the music and the figgers is altogether different to what they used to be. Hard to keep run of ‘em.” The “Rheumatics” also interferes with some of these old boys in their terpsichorean efforts. Bill Ford and Ed. Allen are the best dancers among these Pioneers. There is a sharp rivalry between them. Allen does the pigeon-wing very neatly, but Ford stands him off with his chloride jig.

The other morning one of the finest dogs in Austin laid down and died from eating a bit of poisoned meat he had found somewhere. His master has always tried to secure him against anything of the kind, buying the best of meat for him, keeping him well fed, and putting a muzzle on him whenever he thought there was any special danger. A year ago another very valuable, much prized dog, belonging to J.A. Wright, formerly of your city, went the same way. In neither of these cases was it supposed that the poisoning was intentional. The way of it is, somebody, recklessly and meanly, puts out poison to kill offensive cats and the dogs get it, or some blunder-headed humanitarian concludes to wipe out a few dozen of the surplus curs. But the miserable curs, not having sense enough to find the meat prepared for them, escape, while fine blooded dogs, with keener scent, are most liable to pick up the poison and experience the result. The dog poisoner is never found, but the dogs evidently find the poison. The only way to avoid thus losing your valuable, dearly beloved dog, and consequent broken-heartedness in the family, is not to own any dog. ALF. DOTEN. 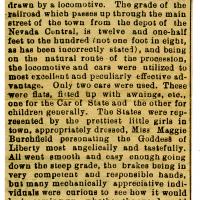