Eighty degrees of Summer have prevailed continually for some weeks past, and there will be no more snow until next week or the week after. The strawberry crop is consequently more abundant, and the Methodist ladies propose giving a festival for the benefit of the church this evening. Dancing will be allowed, and no person of affluence or general affability will be excluded. Hot weather is not always favorable to the religious condition of Austin, and every Sunday an excursion train takes a crowd of festive devotees a few miles down the railroad track to some eligible spot where they can play baseball, shoot glass balls and drink beer. This warm weather also seems to have stirred up things in the law line, and the Justice of the Peace is getting rich. Last week he put the editor of the Democrat in jail for contempt of court, and next day that editor went in on his only hope of fortune in this world by suing the Judge for $10,000 for false imprisonment. Then there was a case where a fellow was caught breaking into a man’s premises and stealing pigeons. It was decided that pigeons are wild game and common property, therefore there was no burglary nor larceny in the matter. Next day the pigeon proprietor met the alleged thief, and tried to play for even by choking him a little. He was fined $30 for that, and fails to see where the profits on the pigeon business comes in. Then a Deputy United States Marshal levied on some of the principal business houses and collected a few hundred dollars on a judgment from the Supreme Court. More legal trouble is anticipated, and the lawyers feel prosperous. Speaking of

Reminds me of the way Justice Putnam, of Gold Hill, sat down on Lawyer Stephens. It was a chicken stealing case, or something equally important, and Stephens came down from Virginia as attorney for the defendant, with a whole wheelbarrow load of law books, which he piled jupon the table. The case was duly opened, and "Stevy," entrenched beside his huge pile of legal authorities, raked the chestnut locks away from his massive brow with his finger, threw himself back on his gambrel joints, and started in to make an eloquent speech on the subject.

"Your Honor is well aware that before the immortal palladium of American freedom law and equity reign supreme. In order to support my argument, and influence your Honor’s opinion in this important case, I will proceed to read a few extracts from the famous legal authorities before us. Here, your Honor, we have"—

"Hold on right there, Mr. Stephens. I ain’t goin' to stand none of yer taffy in this racket. Now, what I wanter know is what you brought that dam big pile of books down from Virginny fer?"

"I merely wished to show your Honor wherein"—

"That’s enough, sir. Do you have the cheek to insinuate that this Court don’t know law? By the holy poker, you jest open another one o' them books on me and I’ll commit you fer contempt of Court. I oughter rule the defendant guilty, right here, but I guess I jest dismiss the case. Court's adjourned. You get out, and go home with yer books, and don’t you ever try to impose 'em on me again. Not a word outer yer head, or contempt goes."

Of July will be along shortly, and although that glorious day has been allowed to pass comparatively unnoticed here in Austin for the last few years, the chances are that it will be properly observed this time, as was the recent Memorial Day. We have a newly-organized military company and a consequent increase of patriotism, plenty of flags, powder and fireworks; why should we not celebrate? I notice by the ENTERPRISE that your citizens take no interest and show no sign whatever of a desire to celebrate the day. But just let Carson or Reno send invitations to your military companies, or the Gold Hillers attempt their old-time heresy of getting up a separate celebration of the grand old national holiday, and Virginia will have a red-hot celebration of the Fourth, got up in about four days.

Austin is one of the liveliest places on the Pacific Coast for a good local reporter. Something is always happening, every once in a while, or oftener, and the reporter with the liveliest imagination can get in his work oftener than anybody. Mining accidents are not frequent, and the doctors have little to do; very little fighting whisky is sold, most of the saloons being two-bit houses, but the Piute and the Chinese are a never-failing source of some kind of items. The Piutes live on the hillsides, amid the fragrant sagebrush, and do most of the washing, wood chopping and general household chores for the town. John Chinaman has his little old wash-house, and also little garden spots right in the midst of town, where he raises lettuce, radishes, onions and all that sort of thing, for which he finds ready sale, and smokes his opium in peace and contentment. In this connection I notice a sad item in a local report among the recent telegrams from New York. Being ambitious to achieve distinction as a detective, like other of his tribe in Boston and elsewhere in the East have done, sometimes, he quietly frequented the Chinese quarter, and made a moral wreck of himself, smoking in an opium den, having to put up four bits each time, in order that he might lodge a complaint, and have the Celestial wretches arrested for violation of the opium smoking law recently enacted. He achieved more success than either credit and renown, for after the arrest was made it was discovered that the new law had not yet gone into force and effect. He made a lively local item, but it cost him about $17, besides the loss of what little reputation he had. Austin reporters smoke nothing but two-bit cigars, and are innocent of opium den or other heathen practices.

Austin can support one Catholic and one Protestant clergyman tolerably well. There is a fine lead of wickedness for them to chloride about upon, with regular profit and no big pay streaks, but a third preacher seems to be one more than there is coin support for. Another has been engaged to fill the vacant parsonship of the Episcopal Church, but some of the leading members openly declare that they don’t think the fun pays for the powder, so to speak. They would rather go to the Methodist Church instead of having to work up a reluctant support for another preacher, who is liable not to be happy therein. Preachers are said to be scarcer and not so easily obtainable as they used to be. A very good reason is that they are not so willingly and well supported as they used to be. "Ye cannot serve both God and Mammon" are holy words which do not hold good in their case, for in professionally serving God they have to look to Mammon for substantial support. Gold Hill, you know, starved out all her Protestant preachers, and literally starved one to death. The poor fellow served God ambitiously till Mammon failed to back him up, when he fell down and died of hunger and a broken heart.

The old prospector is never idle, but always looking for new discoveries of rich chloride and good ore veins. The hills and mountains in this district have been pretty well searched, yet new discoveries and locations are still occasionally being made. One was found a few days ago down near the public cemetery, in the edge of the valley, half a mile or so below the town. Some rich float has occasionally been found there in years past, but the lead it belonged to has only now been definitely traced and secured. The vein is but a few inches thick, but it is rich and worth having. Being so near the graveyard the old prospectors who found it can work it with a grim satisfaction in knowing that their last ditch is before them, and that they have a dead thing on ultimate success.

Colonel Charley, together with his squaw, Susan, and their handsome, black-eyed daughter, Hattie, have left Austin and gone westward to enjoy the fandangos and festivities of the Piutes of Walker River and elsewhere in that direction. In case they should visit Virginia again be kind to them, critically observe Hattie's large, beautiful eyes, and give old Charley a new coat. He needs one—also pants and a respectable hat. ALF. DOTEN. 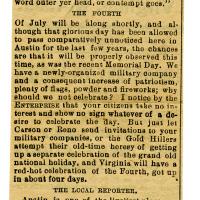