Winter continues to linger, etc., and if it really is a fact that "April showers make May flowers," the Reese River section will be one grand universal bouquet shortly, to the exclusion of all other vegetation. Showers and passing squalls of hail and snow are the order of each day and the programme of each night, and the whole country, from the peaks of the mountain ranges to the surface foundations thereof, reposes coolly beneath a ghastly, gleaming wilderness of the beautiful snow. Strange to say, however, thirty miles east of here, in Smoky Valley, no snow or other style of moisture has fallen since the first storms of Winter, and the whole broad valley is dry as powder, with little or no snow visible on the neighboring hills and mountain ranges. Colonel Charley, the Piute Wiggins of this section, after a careful canvass of all the weather signs—animal, vegetable and otherwise—deliberately promulgates his prediction that there will be snow in every month of this year. It does look very much like it at present.

Have opened out lively here in Austin, the principal leader in that line being one between to rantankerous members of the press, day before yesterday, on the most public street, at noonday. It was a one-sided fight, where one did all the fighting, was arrested for it, paid $30 fine, and growled because he "hadn’t got the worth of his money." Perhaps nothing worse may result from this disagreeable muss, but the stormy atmosphere is oppressively sulphurous with rumors of future desperate encounters, flowing wounds and blood-sprinkled sidewalks. Even the solitary crow that camps on Mount Prometheus and flies over the town occasionally croaks portentously and looks more like the ghost of an old sexton than ever.

The Manhattan mill stopped work day before yesterday, after a prolonged and prosperous run of six months. It has merely shut down for a couple of weeks, in order to make certain necessary repairs, when it will star again with plenty of ore. This has been the longest and best run the mill has enjoyed for years, and, judging from the amount of ore on hand and in sight at the various mines, the next run may be fully as long and as prosperous as the last has been. These mines are mere surface workings as compared with those of the Comstock, and as they show no signs of exhaustion, they certainly are liable to continue their good yield for numerous years to come. In fact, there is far more ore in sight in them now than there was a year ago, and they are in better shape for productive working. The shutting down of the mill does not seem to affect the general prosperity of Austin to any very perceptible extent at any time. Things wag along in the old settled groove, regularly and without excitement, while the mill is resting the same as if it were running in full blast. Nobody in the business community seems to be getting rich, but everybody slips along in a quiet, humdrum sort of way the year round, and were it not for an occasional episode like the journalistic muss of day before yesterday, the newspapers would have a tough job to get up anything in the shape of local items.

Last night the Odd Fellows had a grand ball, the finest of the season. It was very fully attended and ran till daylight this morning. Yesterday was another high jinks day with our Mongolian residents. They flew one big red flag with a white border, and a brilliant green silk banner floated above it from the top of the mainmast, while along the front of their joss house and Masonic Temple numerous other flags were displayed. A large amount of firecrackers and bombs were exploded during the day and evening, their band of very barbarous musicians played on the upper deck of the temple, and there was a sound of promiscuous revelry throughout the celestial quarter. What it was all about they did not explain, other than to say that it was a "belly good time," which doubtless means a feast. These Chinese may be heathens, but judging by the frequency of their festivities they have more fun than anybody.

Newspaper mention of the recent visit of a United States special timber agent to the nut pine regions of Como, to look after the timber on the public domain, reminds us of a similar circumstance which occurred nearly twenty years ago, when I was a resident of that same locality. On the 12th of October, 1863, young Winnemucca, the noted war chief of the Piutes, came to Como, accompanied by about a dozen of his braves, all mounted on horseback. At their request quite a number of the principal citizens met them at the chief saloon, kept by "Martin, the Wizard." Winnemucca was rather a fine looking Indian, of about thirty-five years, full average hight, straight and dignified, face painted brick red, a few eagle feathers stuck in his hair, and he wore shoes, pants and a gray blanket, but no hat. All the rest of his crowd wore hats—and clothes. He addressed us through an interpreter to the following effect: He had learned that the whites were cutting and destroying the nut pine timber which so bountifully covered the hills of that section, and had come to request them stop doing so. They were welcome to use all the dead timber which strewed the hillsides, for firewood, but they must not cut the live trees. Those trees were the "Indians orchard." For hundreds of years they had harvested the nuts that grew on them so plentifully, "same as white men catchum apples in his orchard," said he. "Injun mans no cuttum white man’s orchard trees—no likum white man cuttum Injun’s orchard all same." These were the instructions officially given from Chief Winnemucca, and it was his urgent request and command that they should be abided by. These lands belonged to the Piute tribe, and until some definite treaty should be made, their rights must be respected, and their nut orchards held inviolate by the ruthless ax of the miner or the woodchopper. The instructions of the great Chief were received with due decorum and assented to. During the interview, Winnemucca spoke not a word of English, but watched every man and motion very carefully and intelligently with his keen, bright eye, and at the conclusion mounted his pony with an agile leap, waving his hand royally by way of farewell as he rode away, with his dusky escort. Young Winnemucca died several years ago, and was a very different sort of a man from the old peace Chief Winnemucca, who died last Fall. The Indians’ orchards about Como are not there now. Nobody quit cutting the timber as long as there was any left to haul to market.

If about half of the Sutro tunnel could be cut off and brought to Austin, it would be a valuable acquisition and of material assistance in the deep working of these mines, for no such tunnel exists or is projected in this locality. And to an old Comstocker it seems a pity that the Sutro tunnel should not be made more available than it is in the development of the old lode. Surely its westward mission has not ended. With the compliments of Superintendent Thomas I received, a few days ago, a copy of the recent annual report of the company. That of a year ago indicated a desire to push the tunnel still further westward, but this says nothing about it. The supposed west wall of the Comstock, the hard syenite or "diorite," as Professor Gunning calls the country rock of Mount Davidson, should not be considered the "pent-up Utica," confining the progress of the Sutro tunnel westward. A thousand feet further might develop bonanza wonders. Grand golden treasure possibilities and probabilities remain unexplored and unrevealed within the deep abdominal fastnesses of old Mount Davidson, and the Sutro tunnel is the keyhole to the mystic realm of boundless wealth. Will the key never be turned, the door opened and the problem solved?

Speaking of mines, we residents of Eastern Nevada are taught by the newspapers of Reno and Carson to believe those places to be perfect mines of deadly disease—festering bonanzas of corruption. Reno looks fair enough on the surface, but its substratum has imbibed enough descending filth to constitute one vast reservoir of seething rottenness, on top of which Reno stands like a poultice on a boil, liable to be disrupted and devastatingly demoralized at the first hot spell of weather. Carson is represented as an outspread saturation of privy vaults and cesspools that people live on top of, waiting for a hot-weather epidemic to wipe them out. Why should fair Carson and promising Reno be rivals in such matters as well as in everything else? The chances are, however, that neither place is as bad as it is represented, or as it might be. ALF. DOTEN. 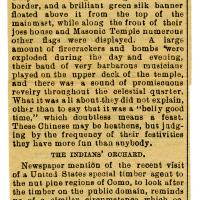