One of the approaching weddings shadowed forth in my last week’s letter took place evening before last, and was the most popular affair of the kind that ever transpired in Austin, although there was nothing ostentatious about it. It was the wedding of Alexander C. McCafferty and Miss Mary E. Barrett, both well known and popular residents of Austin. Alex. was elected County Assessor last Fall, and has more friends than anybody, and his bride is also very highly esteemed. Their wealth otherwise is not great, consequently they are all the happier. The wedding took place at a private residence, which, in Austin, does not mean an extensive house, but numerous friends managed to squeeze in and partake of the marriage feast and other hospitalities. The whole town considered itself present, anyhow, and everybody sympathized. The Lander brass band turned out in full force, and never did better. They played "Haste to the Wedding," "When Johnny Comes Marching Home," "Sweet By and By," and other significant pieces, and people all over town patted time to the music. Occasionally those on the back streets banged away with gun or pistol, and even the Chinese quarter testified its approbation with the explosion of a wheelbarrow load of fire-crackers and bombs. The Chinese band did not perform, but the drummer got out on the porch of their little red-faced Masonic temple and rattled away for over an hour, without pausing to grease his elbow. The happy pair received a most magnificent outfit in the way of bridal presents—a whole load of silver-ware, big pictures and a sack of flour. The "Tasty Club," an association of bachelors who have eaten together for several years past, and of which Alex. was the Presiding Elder, passed a resolution to fast for a week, and as an appropriate token of their esteem, presented the newly-mated with a full set of silver spoons, knives and forks. The Widow McWinzle sat up all night trying to compose some poetry equal to the occasion, but utterly failed through her usual bad luck in rhyming the name. Yesterday Alex. had a delivery wagon out all over town, taking wine and cake to friends who were not present at the wedding. Everybody wishes him and his fair bride a big bonanza of luck in the promising mine they have located on the uncertain ledge of matrimony, and that their assessments may all be dividends.

It is amusing to any practical old Comstocker to notice that the regular periodical yarns and specious reports are again going the rounds of interestedly concealed ore bodies in the lower levels of the Comstock. They say that there is plenty of rich ore all along the old lode, developed by the deep drifts and winzes away down in the hottest places and mythical meanderings of the pick and diamond drill. And they say these bonanzas are kept carefully concealed and avoided until the powers that be shall obtain more desirable control, and get things their own way. All sorts of reasons, definite and indefinite, are given for this state of things, but the whole proposition, although rather encouraging, if true, partakes too largely of the intangible and mythical. Unfortunately there is no more probability in it now than there has been in times past. For it has been ever thus since childhood’s hour, in the history of the Comstock. Somebody has always been trying to delude innocent stockholders or ambitious possessors of a few dollars into such hopeful, concealed bonanza beliefs. But the history of the Comstock shows too little reality in the proposition. A new ore discovery or valuable prospect in any portion of the lode may have been held back from the knowledge of the general public for a few hours, but never for a few days, for the powers that controlled were always more than willing and anxious to produce good ore, bring it to the surface and financially realize as soon as possible. It is true that the first rich symptoms of the Crown Point bonanza were to some extent held from the public knowledge until Superintendent Jones could secure control, but meanwhile the good prospect leaked out, and the stock bouncing upward indicated something new and important in the mine. The miners themselves could not fail to make their knowledge of the situation available to themselves and friends. The fact is apparent and well known that the good prospect developed into something that really exceeded the most sanguine expectations of the ever and over-sanguine Jones himself. He had very little real knowledge of the actual value of the new find ahead of the general public, and has always been given credit for more than he was entitled to in that respect. He had no diamond drill or other means of looking beyond the face of the drift, but like all other watchful mining Superintendents he naturally had a few hours the advantage over outsiders, and good luck backed up his sanguine investments. That’s all. As to the Consolidated Virginia and California bonanza, the general public knew about as much as the insiders from the start, and in the matter of the left-handed Sierra Nevada, too much was known—or unknown—for more insiders than outsiders were slaughtered. The future history of the Comstock will show that there are no bonanzas concealed at the present time, but that some are being disadvantageously neglected and allowed to remain undiscovered in the old upper portion of the lode, above the level of the Sutro tunnel, where all past bonanzas have been found.

Has always been considered a dread disease, yet the spotted fever so fatally afflicting Carson seems far worse. The suggestion of the Appeal that it proceeds from the numerous foul privy vaults and cesspools of the town, and that they should all be cleaned out and purified forthwith, may be correct enough, yet it would seem advisable that the town should be totally evacuated by the inhabitants while that process of purification was going on. Smallpox is heard of at various points, yet does not seem to be as fatal as it is alarming and disagreeable. Over in Nevada City, California, it still rages, and seems peculiar to the inhabitants. Indeed, it seems not only peculiar, but influential in that respect, for a family who years ago used to reside in Nevada City are not reported to have the disease in Visalia.

Whether grapes can be grown successfully in Nevada is being discussed some in the newspapers at present. One says it is an "experiment which has never been tried." That’s a mistake. J. M. Tailleur, down on Carson river, just above Dayton, has been raising grapes and making wine from them for the last three or four years. He planted a few vines near his house some years ago, to have them run over the porch by way of ornament, and was quite surprised to see that they not only grew very thriftily, but also bore good grapes in due time. He consequently and subsequently planted a nice little vineyard, with excellent success. Others in favorable localities throughout Nevada can do the same. Even in Gold Hill, the writer of this grew several bunches of grapes two or three years ago. Those grapes cost about six bits apiece, but they grew all the same, and became very sour.

Speaking of vineyards, a young man in Austin, who is willing to work in the vineyard of the Lord occasionally when his services are called into requisition, attends Sabbath school regularly, and takes an interest in it. In the absence of the pastor he has been sometimes called upon to preside, and has kindly and efficiently done so. But he does not always seem to be perfectly at home and in his proper element, but a little nervous and not up to the regulation religious standard. The other Sunday, for instance, a studious young miss of ten year asked him: "Mr. Jenkins, will you please tell me what is the Resurrection and the Second Death?" Jenkins hitched around uneasily as he gently, yet conscientiously, replied: "Well, my child, I’d rather not try to explain that to you, for I don’t believe any part of it myself !" ALF. DOTEN. 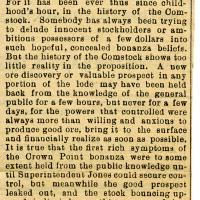