"Ha ! ha !" exclaimed Professor Snider last evening, as the hail, snow and sleet came whirling down over the roofs and around the corners. "We’re getting plenty of it, just as I predicted we would, this month. Wiggins hoodooed March; anyhow, it was by all odds the mildest, pleasantest March we have had for years, just as I told you it would be, and here now you see my snow-storms coming according to programme. Winter lingers in the lap of Spring." Snider claims that last remark to be original with him, but then he also claims to be the author of "The Beautiful Snow." The mountain ranges are well whitened, and enough snow has fallen his month to insure good crops and a prosperous farming season throughout the Reese River section. East of here there has been less of it, and the ranchers are calling for more. The Professor says these "April showers" will continue all through the month.

Snider attributes Wiggins' failures as a weather prophet to too much faith in old Zodiac, the disreputable looking crank who is pictures out in the almanacs, standing so complacently with his stomach and intestines exposed in hari-kari style, and a lot of sheep, goats, lobsters, crabs and other shell-fish performing a war dance around his remains. Observations through his huge telescope on the summit of Mount Prometheus are what give the Professor his wonderful knowledge of the weather. He was a little puzzled, though, the other morning. His telescope is mounted across a couple of granite ledges, and when he went to take his usual before breakfast observation he was very much surprised to see what was evidently old Capricornus himself, one of the most popular and influential signs of the Zodiac. The head, horns and gray beard could not be mistaken, and looked of mammoth proportions. Snider gave his telescope a roll for a more favorable position, when out bounced a stray goat, which had crawled in there for shelter and repose the night before. This circumstance put him more against those almanac signs than ever.

The population of Austin is constantly increasing through home accessions, and holds its own sufficiently to keep all the houses occupied, with the help of a few outsiders, who come to make their residence here for mining, business or other purposes. But enough Austinites leave to give place to any newcomers. Especially is this the case every Spring. Several of the old settlers have left within the last few weeks, or are preparing to leave. Some of these miners or "tributers," who have had the good luck to unearth a pocket or so of rich ore, made a good "crushing”"at the mill, and now go on a visit to the "old country." Others, who have carefully saved up their earnings from mechanical business or agricultural sources, desire to make their home in some more genial and productive section, where something naturally grows besides the everlasting, monotonous sagebrush. They are dreaming of grapes and grassy hillsides and tall timber, and it is not strange that their eyes and their footsteps turn to the great and promising Northwest, where the noble Columbia river flows incessantly toward the blue Pacific. August Betz, one of our old-time, hard-working citizens, left a few weeks ago for Oregon. He returned the other day, having purchased a nice little farm of 200 or 300 acres on Rogue river, seventeen miles from Jacksonville, for $3,500. He will soon take his family from here to their new home, and hopes to pass the rest of his days raising hops, spearing salmon and rolling in clover. S. Markwell has sold his little ranch on Big creek, near here, for $5,000, and with the product of last year’s crop, $5,000 more, will start shortly with his family, in two wagons, bound for Washington Territory. He expects to find the home his heart has been dreaming of on the borders of Puget Sound, and there while away the rest of his days among the lofty pines, firs and tamaracks, and die happy, leaving his family well fixed. Some of the lucky tributers who went on a visit to their friends in the old country last year, write that they are coming back shortly. Others who have left more recently, or are now about leaving, will not fail to remember how they prospered and met with good luck here, and they, too, will come back. And so Betz and Markwell may by and by tire of Oregon rains, fogs and Puget Sound monotony and experience, and desire to return to the livelier old companionship, clearer atmosphere and brighter skies of sagebrush Nevada.

And this is the season of the year when the chronic Austinite, who cannot emigrate or does not care to do so, turns his attention more particularly to matrimony. He may escape during the rest of the year, or from season to season, but the genial Springtime is liable to induce a desire within his breast to browse around in the fair field of matrimony, and then it is that he can be lassoed with the connubial halter, if ever. Sundry marriages have already taken place, and more are being talked of. There is one where both parties lay aside the weeds of matrimonial bereavement to form a new and presumably happier alliance, and if financial wealth be any factor in the production of the desired happiness, each has plenty of money. Another is where neither party has any coin worth mentioning, but he is one of the most deservedly popular gentlemen in Eastern Nevada, and she a most sensible and estimable young lady. The cupboards are being built, the carpets and other furniture made ready, and they will go to housekeeping as soon as the wedding is over. All Austin stands ready to pat the festive bridegroom on the back and wish him an eternal bonanza of happiness. Even the Widow McWinzle feels more hopefully inspired, and Spykens has to keep out of her way. She wears a wilder fizzle-bang, and her montagues hook upward on each side of her countenance, like the curling breakers of the sea of eternity splashing against the Rock of Ages. (That’s the way Spykens eloquently expresses it, but not to her.) She has been writing some intense poetry and he knows it, but he carefully dodges all chances of her serving the papers on him.

Has always been a peculiar feature of the mines of this locality, from the earliest times. The veins being small and highly concentrated, the ore may be comparatively scarce at times, but it is rich. And even at this late day new strikes of rich ore veins are occasionally made. Over at Yankee Blade, three or four miles north of here, on the same ore belt, several new developments of rich ore have been made within the last few months, and that locality contributes very considerably toward keeping up the present unusually long and lucrative run of the Manhattan mill. I was yesterday shown a piece of ore from the most recent strike at Yankee Blade, about as big as a teapot, which was simply a solid mass of black antimonial and ruby silver, worth $2 or $3 a pound. The vein is a foot or so in width, but, if it is largely composed of such ore as that, it may be considered a big thing.

Day before yesterday J. C. Hampton, of Virginia, and W. S. Gage, of San Francisco, both partners in the firm of Gage, Curtis & Co., grocers, Austin, were here, having arrived the night before from Virginia. They had with them Hon. Jay A. Hubbell, ex-member of Congress from Michigan, and famous as Chairman of the Republican Congressional Committee. Mr. Hubbell was brother of C. P. Hubbell, partner in the firm of Gage, Curtis & Co., who died in San Francisco last Fall, and he is in this section for the purpose of settling up his brother’s estate. Hampton and Gage were, of course, perfectly at home here, and met lots of friends, and they trotted Hubbell around lively and kept him feeling good. Hubbell being only fifty-three years old, however, skipped around as lively as either of them. He has the square-set, resolute, self-possessed style of a down-East whaling Captain, and would figure well on the quarter deck as commander of a double-turreted monitor in active engagement with the enemy. There is more to him than there looks to be, and he certainly has proved himself to be a very able and active political generalissimo, both financial and executive. By reason of a letter from Garfield to him, in which he was addressed as "My Dear Hubbell," falling into the hands of the Democracy, that vexatious party has fixed that affectionate cognomen upon him—no doubt somewhat to his annoyance, from frequent repetition.

Spykens sought and was honored with an introduction. He was cordially received, and mutual compliments, etc., passed.

"Yes, I recollect the name very well, Mr. Spykens," said he, "and am pleased to make your personal acquaintance."

"Thank you. I hardly thought you would remember my name, but of course yours is known throughout the Nation. Here in Nevada even the Democracy familiarly know you as My Dear Hubbell."

And Hubbell slammed the lapels of his coat across his breast and buttoned himself up with an impatient jerk, as he bobbed his figure-head and tacked the ship out of the door, where he got into the wagon with the rest to go to dinner.

It is not to be inferred that Mr. Hubbbell meant to insinuate that Nevada was the infernal regions, or that he is even known in Hades at all at present.

Hubbell, Hampton and Gage left for Ione and Grantsville yesterday morning, where Gage, Curtis & Co. have business connections established, and will return here to-morrow, taking the cars for Virginia and San Francisco next morning. Hubbell proposes staying on the coast two or three months. ALF. DOTEN. 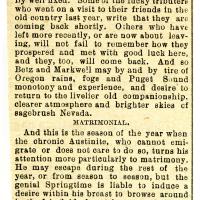