The storms of the last few days have been of incalculable benefit to this section, and the fall of snow, although not very heavy, was worth its weight in bullion. It still whitens the face of the country, and the thirsty earth greedily absorbs it as it melts. And the white-peaked summits of the mountain ranges, gleaming in shrouded sullenness against the still threatening sky, betoken a goodly reserve of snow, preserved there for future reference. There had been so little snow up to the 1st of the present month that the grain crops bade fair to be a complete failure, and although agreeably favored at present, unless more snow or rain supplements what has fallen already, the crops are not secured against failure by any means. Cattle will get along well, with plenty of grazing and water, and in fact horses, cattle and sheep are in better condition now than they have been at a corresponding stage of the season for years. The prospects for tender mutton chops and less durable beef steaks are very encouraging.

Regarding the new cadet allotted to this State at the West Point Military School, it is not pleasing to hear that Congressman Cassidy has decided to appoint an eligible young man to the position, even though he be from Eastern Nevada. Availing himself of his prerogative to do so cannot give as general satisfaction as though he were to institute a competitive examination and allow the smart boys of all parts of the State to contend for the coveted position on equal terms. It will be borne in mind that the young aspirants sent from Nevada to the military and naval schools of the Government in times past, have not all turned out so well as expected, by any means, although some have well improved the golden opportunity, aided by their own natural talents and ability, and are to-day a credit and honor to the State. None but the fittest and best should be selected, and our worthy Congressman should not rely altogether upon his own judgment in this important matter. There are a goodly number of eligible young men in the western part of the State as well as in Eureka and elsewhere, and we can present at least one here in Austin. The friends of Robert Eames respectfully submit him as a candidate for the proposed honor. He is a worthy young man, of good family, well qualified morally, intellectually and physically, and in a competitive examination would stand more than an average show for success.

Of Lander county are in a very flourishing condition, and are well supported financially, all having a surplus of funds in their treasuries. Here in Austin about 300 scholars are in regular attendance. Professor C. M. Ritter is Principal, and under his able and efficient management the school will bear comparison with the best in the State. Young Eames, referred to above as candidate for West Point honors and privileges, is one of his pupils, and will graduate at the close of the present term. A pert little nine-year-old miss, in one of the school departments, the other evening, remarked to her teacher: “Oh, dear; I’ve missed in my written spelling two days in succession. I do hope I shall be perfect to-day; I’ve been altogether too two lately.”

The suggestion of the San Francisco Daily Report to make the grand Triennial Convocation of the Knights Templar at San Francisco next August the occasion of an Exposition of Minerals of the Pacific Coast is not a bad one, by any means. Thousands of Knights and their friends from all parts of the nation will be present, and the suggested Exposition would be eminently appropriate and form one of the most important and interesting attractions of the occasion. The report suggests that the State Mining Bureau, which now has the finest collection of ores and minerals in the United State, be made the nucleus of the proposed Exposition. California took no part in the Denver Exposition last year, and Nevada, although represented very richly there, hardly did justice to herself. This exhibit being right at home, both States would naturally take an extraordinary interest in it, and satisfactorily demonstrate their ability to show the grandest, richest and most varied and interesting collection of ores and minerals ever seen in the United States or the world. Arizona, New Mexico, Colorado, Idaho, Utah, Oregon and Washington Territory could materially contribute, even at short notice; but even a grand showing of California and Nevada mineral products alone would be a rich and magnificent affair, redounding to the credit and material advantage of both. This Pacific Coast Mineral Exhibition idea should not be lost sight of, but vigorously acted upon, promptly and forthwith.

Our mutual friend, Spykens, has struck it at last. He has just received a Down East newspaper, which brings the unexpected, yet agreeable information that he is a millionaire, or a high private in an army of millionaires. The story is substantially as follows: William Bradford, who was the third Governor of Plymouth Colony, and one of the Pilgrims who came over from England in the Mayflower, landing on Plymouth Rock, December 22, 1620, left a munificently valuable estate when he died. He received a large amount of wealth with his second wife, Alice Carpenter, who inherited the same by the death of her first husband, an English nobleman. Bradford died a widower, and left his great wealth unbequeathed. Like sundry other valuable properties in England, the Bradford estate has, through the apathetic honesty and protection of English law, been allowed to lie untouched, and increasing in value, for over two centuries, until now it amounts to fully $100,000,000. It lies in the Bank of England, and has been the subject of active litigation for the last hundred years, there being numerous claimants, of course, in this country. They are much scattered, many living in Ohio, but the most numerous and direct still live in old Plymouth. Sarah Bradford, the last lineal descendant in the sixth generation, died there last year, in the one hundredth year of her age. Spykens, whose full name is Ephriam Bradford Spykens, is all right, that venerable lady being his own aunt. He was born in Plymouth, and traces his lineage direct to Governor Bradford and his big fortune. There being only about 10,000 legal heirs to that $100,000,000, Spykens’ share will be $10,000—not bad to take—when he takes it. He has filed his claim, together with that of his sister, over in California, and when he receives his inheritance will devote the remainder of his days in spending it, even if he has to start a new daily newspaper in Austin to do it.

Speaking about windfalls, Austin is the queerest old place for scattered relics and pick-ups anybody ever saw. The old-timers were evidently loose and broadcast in their ways, and even those who have come in since the flood (which occurred August 16, 1874, and not October 16, 1864, as you printed in my last week’s letter), contrive to follow suit pretty well in the way of scattering things. Observant and industrious children can pick up more old spoons, buckles, coffee-mill handles, door knobs, parts of pistols, clock wheels and other things, than they could almost anywhere else in creation. Many a youngster is rich in the possession of three and four jack-knives and several pieces of pipes of various patterns, which he has picked up in the course of his daily meanderings. The wickedest man in Austin one day last Fall picked up a huge brass key on the street. A two-line advertisement brought the grieving owner in possession of his key again. Next day he found a good jack-knife with seven blades, and a little advertisement found the happy owner. A month after he picked up a bundle, early one morning, containing two clean shirts, he needed them, but his native honesty induced him to advertise and lose them, same as he did the big brass key and the seven-bladed jack-knife, not even receiving the inexpensive thanks of the respective owners thereof. Yesterday he picked up a $20 gold piece which gleamed cheerily from the mud of the gutter. He wondered how long it had been there, and who lost it. The more he concluded he would not advertise. It is worth something to find a $20 piece, and he only charged that for finding it. It is common enough to see jack-knives, and even whole bunches of keys, advertised as lost or found, and men even advertise their wives, but nobody ever sees golden “twenties” thus advertised as found; not even greenbacks, yet money is proverbially easy to lose. If one could only contrive to find it as easily as it is lost, how nice that would be.

The annual boom in base-ball is commencing to pervade the atmosphere of this section, and the Austin base-ballers are already shouting defiance at the B. B.’s of Eureka. Last year the Albion club came over from Eureka and got licked. The chances are that the Eureka boys may get themselves well-practiced, and some fine day walk away with the prize fixings. Those Eureka boys remember a thing or two from last year, and doubtless have additional points to go on. Anyhow, there’s lots of fun in base-ball—even more than there is in base metal ores. 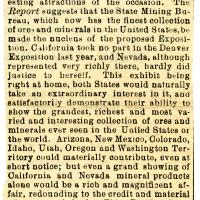