Professor Snider, our local astronomic weather sharp, who predicted that March would come in like a lamb, remain lamb-like all through, and go out the same way, is very likely to make a fine success of it. He certainly has beaten Wiggins badly on the proposition. As to that matter he used to go to school with Wiggins and declares him to be a fraud of the most exasperating kind, whom it is always safe to copper. Snider says the Winter is not over yet, however, but predicts both snow and rain, next month—principally snow. There will also be wind, but no Wiggins’ tornadoes. Unless there is considerable rain or snow pretty soon, the crops of grain, hay and everything else throughout the farming sections of Eastern Nevada will be short—in fact almost a failure. Some of the newspapers recently have been stating that grass is growing in the streets of Eureka. Now, as nothing but sagebrush ever grew there before, this may be considered an encouraging circumstance to farmers and cattle men. If Eureka will produce a good crop of grass, the rest of the country is safe for bountiful crops of all kinds. Should the low price of lead and the heavy discount on silver continue Eureka might find it good policy to rest her mines for a season, and advantageously "go to grass."

Of the Manhattan mill still continues uninterruptedly. Every other day a down train on the railroad, direct from the mill, brings ten bars of silver bullion, worth $1,000 each, to the express office for shipment to San Francisco. It is quite amusing, even to old residents, to see the Piute warriors in their fine linen dusters rush forward, when the cars stop in the middle of the street and eagerly pick up those heavy white bars of silver and pack them into the express office. They have a very good idea regarding the amount of half dollars each bar can be coined into, and their consequent utility in an extensive game of poker. Some of these Piutes have thus handled more silver than nine-tenths of the whites in America ever saw. And it is quite refreshing to note the complacent smiles on their ruddy countenances when they retire to the sidewalk as the train passes on. Give them a whole carload of bullion apiece and they would feel no richer nor enjoy life any better. Meanwhile, all the little narrow-gauge ledges or veins of the Austin ore belt continue their steady output of rich ore, bidding fair to keep the mill running steadily for a month or two yet.

And now the little old Reese River Reveille, which ranks next to the ENTERPRISE in age among the papers of this State, announces that its subscription price will be reduced to two bits a week, commencing with next Monday. It has maintained its old price, four bits a week, longer than any other well-conducted daily, but it now yields to competition and the requirements of the times. If uncompromising hard work and indomitable John Booth perseverance amount to anything in public estimation, the Reveille must continue to prosper indefinitely.

Rev. R. S. Eastman, who for the last three years has been pastor of the Episcopal Church in this town, having resigned, will preach his last sermon here next Sunday (Easter), and on Monday morning will depart with his wife and child for the East. He has accepted a call to assume pastoral charge of the Episcopal Church in Laport, Indiana, and, making that place their future residence, they may find a more agreeable position and surroundings nearer the old home and friends of their youth. But they will meet with no truer or more appreciative friends than they leave both here and on the Comstock, all of whom will most cordially join in wishing Mr. Eastman and his estimable wife a full measure of happiness and genuine prosperity.

As was anticipated, the recent St. Patrick’s ball was the most popular and well-attended affair of the kind ever given in Austin. Everybody went, and International Hall was the most densely crowded place in Eastern Nevada. It was not until about 5 o’clock next morning that the festive assemblage got sufficiently thinned out to allow of free and comfortable dancing. A comic operetta, with an orchestra of ten pieces, all local talent, is the next thing on the docket, and the Odd Fellows propose giving a ball shortly. Speaking about local talent, there is a concentration of it in Austin, and of all varieties—base-ball players, musicians, singers, theatrical actors and all that sort of thing. There are no liars here, however, since Fred Hart left.

Our mutual friend Spykens has "made a mash," to use the language of the worldly. He incidentally became acquainted with the Widow McWinzle at a church social last Fall. She has now come to the conclusion that he is her natural affinity, and wants him for her fourth husband. Her strong suit is poetry, or, as she expresses it, "human, esthetic rhyme; the sweet, responsive echo of soul to soul."

"Dear Mr. Spyens," sighed the widow the other evening, puckering her mouth down to the size of a shirt button-hole, as it were, "you have lived and loved. The mellifluous profundity of your sympathetic soul has always required that you should."

"Call me Hitty, dear; my name is Mehitable, and those most endeared to me always call me Hitty."

"Well, as I was about remarking, my nature was aboriginally poetic; away up among the embrasured clouds of heaven’s sublimated artillery. My first husband was a dear, genial spirit, attuned to poetic harmony, but nothing could rhyme with his name. It was Tulkington. I used to weave it into poetic verse by abbreviating it to Tulky, but even then it never would make a smooth rhyme with any other word. Two short years he loved and languished, and then sank to eternal rest as softly as though the springs of his couch had been the Springs of Parnassus."

"Beautiful! Beautiful" exclaimed Spykens, "what a rattling good obituary you must have written for him!"

"Ah, me," sighed the widow, "I tried over a year to write seven verses suitable, and perhaps might have succeeded had I not been wooed and won by Jason Babcock. My new married life was bright and hopeful till I tried to merge it into poesy. The culmination came when I composed twenty-seven verses, each one rhyming his name, the best of which were mason, basin, face-on. Then he closed the doors of his heart, took his overcoat and valise and bade me farewell forever. I never saw or heard of him more."

"What a miserable, narrow-gauge, unappreciative wretch he must have been."

The widow gave a responsive roll of her dark gray eyes toward the sympathetic Spykens, as she continued:

"Yes, the rythmatic music of poetry did not abound in his worldly soul, and my own longing heart almost perished before I procured a divorce on the ground of desertion. Then I married my old friend and schoolmate, Timothy McWinzle. He had a soul full of sympathy, and when he realized how my poetic nature was crushed by the very idea of making rhymes of his name, or any part of it, he earnestly, yet rashly, attempted it himself. For days and weeks he wrote and went about the house muttering to himself binzle, crinzle, dinzle,finzle, ginzle, hinzle, and his last words, as he died in the insane asylum, were minzle, pinzle, stinzle, zinzle."

"How dramatically sad," moaned Spykens, as he reflected upon the rhyming possibilities and calamities of his own name.

"Did you ever read Thaddeus of Washoe?" asked she, beaming her loving eyes, full of literary intelligence, full upon him as she gently laid her hand on his coat-sleeve.

Spykens owned up that he hadn’t, and tore himself away from her sweet presence, pleading pressing business engagements. The widow has money in bank, and a whole pile of stocks, and is looked upon as a desirable matrimonial investment, but when Spykens reflects, musingly, upon the sad fate of those three husbands, two killed and one driven away by her infernal poetry, assisted materially, no doubt, by Her large, cold, clammy feet, he concludes to remain single.

Since the disappearance of the mumps everybody has taken cold, and there is more influenzial coughing and sneezing going on in Austin than anywhere. The meanest man hasn’t got it yet, but he will, because there is plenty and he can get it for nothing. Smallpox never thinks it worthwhile to come here and is not liable to, for various reasons. That objectionable disease favors more populous and eligible localities. I see by the papers that they have it over in Nevada City, California. I also notice that the local papers eagerly assert that there is no occasion for any scare on the part of the timid public; that the disease cannot spread, etc. But they record that it does spread, however, at a very lively rate; that the public schools close in consequence; the city officials are taking active measures to corral and squelch the dread malady, and a general scare prevails in spite of all the admonitions to the contrary. Now, why not come out in honest, square recognition of the much and justly-dreaded disease and treat it accordingly? Call it smallpox and treat it as such. Alarm everybody and put them on their guard. The newspaper editors should be among the first to catch the disease, in order that they might write more judiciously and intelligently regarding it. 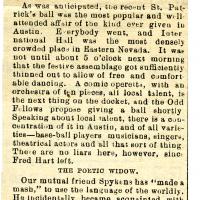