The grand festive event now thrilling Austin society to its very foundations is the St. Patrick's ball which culminates and transpires to-night at International Hall. It is Lent, but the Church has granted a special disposition; all outsiders of any note or social capability will unite in jolly celebration of the good St. Patrick and his annual day, by dancing all night at the ball. Poetic tradition has it that –

St. Patrick was a jintleman,

And born of daycint people.

Be that as it may, he was a good man and did a vast amount of good in his day and generation, besides running all the hoptoads and wriggling snakes out of Ireland. It may be that the frequent fire-cracker fusilades and inharmonious band demonstrations of the heathen Chinese, recently, have not been preparatory practicing for the celebration, but they have been making some new flags, which they displayed a day or two since for the first time floating from the flagstaff of their little redfaced Masonic Temple. One was a large pointed red flag, with a white serrated border, and covered with big white polka dots, on each of which was inscribed a Chinese character, looking like the man in the moon. Above this was a square banner covered with similar spots and characters. This banner was bright green. Can it be that they have Fenimans among them? If they hoist that flag on St. Patrick's Day, the question may be considered settled.

An infallible indication of the return of Spring is the Piute warriors about town all wearing linen dusters. When Winter squarely sets in, they always carefully lay aside the duster, of which they are so proud, and wear a blanket. It is literally a cold day when the dusky lord of the sagebrush has to do this. Now he dresses more stylish than his pale-faced fellow-citizen, his squaw ambitiously keeping him well supplied with clean dusters. From now on, no matter what the weather may be, dusters have to go with him, the only difference being that a cold snap induces him to wear more of them at a time. Anyhow, he knows as much about future extraordinary weather possibilities as Wiggins, the famous yet unreliable prophet, who only succeeded in raising a storm about his own ears.

Was created and experienced the other evening by a well known and popular gentleman, Alex Burchfield, employed at one of the hoisting works of the Manhattan Company. He had occasion to replenish the kerosene filling of one of the lamps, and after his usual style proceeded to do so while it was lighted. The can suddenly exploded with a loud report, covering him with liquid fire from head to foot. Alex is a man prompt to act in cases of emergency, so without waiting to be extinguished, he distinguished himself by one of the longest flying leaps on record, rushing like a blazing comet through the air and plunging head-first straight into a big tank of cold water, several yards distant. He came up cool and smiling, shook himself and went home. He dresses in cotton-batting, principally, at present, and has no desire to fill lamps except through fifty feet of garden hose.

Our enterprising citizens never do anything by halves, and when it comes to public benevolence they go the whole pig, tail and all, if they take the notion. Evening before last there was a hilariously lively runaway right in the heart of town. The buggy was destroyed, but neither of the lady occupants was hurt in the least, and the horses went home to the livery stable. As soon as the exciting story got around, and Colonel Jinks heard the circumstances, he gallantly remarked: "I don't believe I will allow these ladies to pay for that buggy. I’ll do it myself." "Not much, old pard," said Uncle Dick, "I'm going in for $300 of it myself." About a dozen others insisted on footing the whole loss out of their own individual pockets, and there came near being a general rush for the stable. Finally Major Boggs fixed the thing by heading a subscription paper with $250 with the privilege of doubling. In less than two hours over $10,000 was subscribed. When the fortunate stable keeper gets all that money he will be able to retire from business and settle at Tombstone.

The people of Austin are considerably of the literary order. They read a good many books, and especially all the leading papers of the day, including, of course, the Enterprise, which has a healthy list of subscribers, and is read by all the principal and best-informed citizens. They allow two daily papers to be printed here, and the San Francisco papers also are well patronized. By the way, I notice that the San Francisco Weekly Call is publishing a California story, written by Jules Verne, entitled "Phina Island." Thus far it is a totally un-Californian yarn, both in the names of the principal personages and the dialogue of the narrative, to say nothing of the general construction of the story. The charm and true merit of Verne's most famous stories has been their plausibility, on the principle that a lie well told is as good as the truth." This yarn, however, is neither plausible nor sensible, and abounds in Munchausen exaggerations bordering upon the burlesque.

One of the busiest localities in the State of Nevada at the present time is comprised within the active working limits of the mines of the Manhattan Company, on Lander Hill, at the upper end of this town. A few hundred yards is the extent, but within that space half a dozen sets or plants of well erected and established hoisting works, like those of the Comstock, are in full and effective operation, bringing to daylight the very rich ores from the bowels of the big hill. The ore belt lies along the side of this hill, just about as the Comstock does along the side of Mount Davidson, only Lander Hill is not so steep. This busy spot of which I speak has been busy for the last twenty years, and will by busy for the next twenty years, for the ore holds out in both richness and quantity as depth is attained, and in fact there is more in sight to-day than there has been for years. The ore veins are small, but they seem to have exceedingly long and lucrative roots.

A friend who was at Carson during the recent session of the Legislature says he never saw so much talent run to waste. At the hotel where he stopped, the servants complained of the harassing annoyance they encountered in trying to avoid interrupting members of the Assembly or the Senate when they were in their rooms practicing the speeches which they expected to deliver next day, yet he was astonished to see how few of those speeches were ever delivered. Many a time he anxiously watched some member whom he knew was loaded with a mighty speech he proposed to deliver on some certain question, and yet that speech never was delivered from the intellectual womb where it was conceived. Often he watched the eager aspiring eye and moving lip, and the ardent wish to rise and forensically shine, and as often saw the same crowded back or nipped in the bud by adverse action, lack of opportunity, self-discouragement or demoralized confidence. Let those victims of adverse fate, however, remember Daniel Webster, and they may even surpass him yet some day. 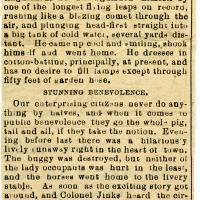