Yesterday being Washington’s Birthday, and the weather particularly fine, of the Spring-like and bland order, this national holiday occasion was celebrated with more than usual interest. There was no public celebration, but the public generally celebrated. Bank, express, telegraph and Post office were closed, or held Sunday hours; there was "no school," and young Austin was patriotically happy. Numerous flags were displayed, and an infinite amount of fire-crackers and bombs were hilariously popped and banged. Even the Chinese joined quite extensively in this part of the demonstration, and had their big dragon flag flying together with the American flag. John rather enjoys our American holidays, although he considers that none of them come quite up to China New Year. No regular salutes were fired, although the Austin artillery caused small thunder to belch forth occasionally from the brazen throat of their big forty-seven-pounder -- I think it weighs about that.

Captain Jack, one of the most intelligent of Reese River Piutes, desired to have this holiday racket explained to him, and it was very lucidly done, after the following style, in his own language:

“Who you call um Washumtung?”

“Yes, Jack, only heapa more so. He heapa good chief. Allee’ Mericans heap likum. This he birthday; when he come little pappoose first time, you kno; savvy that, Jack.”

"Oh? get out, Jack; it's no use wasting time trying to explain things to a dam thick-headed Indian.”

Jack strode away, evidently puzzled as to whether his would-be informant was a fool or a crank.

The small boys of the Comstock, adepts as they are at learning anything that they should not, in the way of little or big vices, are not at all ahead of the small boys of the eastern part of the State in that respect. The juvenile boys of Austin are all veteran cigarette smokers. It is quite common to find small squads of them taking advantage of the pleasant weather to play hookey from school and get out behind an old cabin, or in some secluded place among the sagebrush, and every one of them puffing away at cigarettes, and playing cards like Piutes. It is not a growing vice, but one fully matured and in constant practice. Even the parents themselves are not really aware of the extent of this demoralizing vice among their little boys. Some of the most extensive tobacco consumers of the future are preparing to graduate from Austin.

The fine warm weather of the last few days suggesting the nearer proximity of Spring, fires up the sanguine souls of old prospectors, and they are talking of places away out in the hills here they think big things are to be found in the way of new ledges and mines of silver, gold or copper. And they are getting their old picks and things ready for a movement outward in some direction as soon as the season is fairly opened. Yankee Blade District, three or four miles north of here, is considered to contain just as good ledges as Austin. Some are being worked to very good advantage and profit, and more will be in due time. Bernice District, in Churchill county, is attracting considerable attention. It is a new mining locality, and some very good paying ledges are being developed there. The mines of here, although worked and mismanaged into obscurity years ago, are again coming to the front. The old Murphy mine, in Ophir canyon, was bought last year by a company of Denver capitalists, principal among whom is Jonas Seely, formerly of your city. It is now known as the Twin River mine. They have expended about $100,000 in new hoisting and milling arrangements and the practical development of the mine, and under the efficient superintendence of L. J. Hanchett it is now yielding finely, and furnishing regular shipments of silver bullion.

Colonel Charley, of the Piutes, has heard about that old quail proposition which has so long been going to the rounds, to the effect that somebody will wager any amount of coin that no man can eat one quail a day for thirty consecutive days. Charley stands ready to take that bet whenever anybody sees fit to put it to him in tangible shape. He is anxious for it, and only objects to being limited in the quail supply. As stated in my last week's letter, Charley recently returned from a hunting visit to the Sink of the Humboldt, where he lived on ducks, geese and mud hens for two months, and brought home six big sackful for home consumption. He will himself bet on eating two or three ducks every day for a year, and says he will match his big old "sequaw," Susan, against anybody to eat anything in the shape of game, from a quail to a goose or a sandhill crane. Says he:

Seriously, though, that one quail a day proposition is simply a popular humbug. There are thousands of old California miners who never thought anything of eating from half a dozen to a dozen quail at a meal, and as often as they could get them - the oftener the better. The objectionable feature is the bet, with them, would be merely the aggravation of being allowed only one quail a day.

We all naturally watch interestedly the movements and transactions of our toiling legislators at Carson. They have done very well thus far, and shown a very commendable degree of earnestness of purpose and practical legislative common sense. Wiser heads than even theirs have tackled the railroad problem and been floored, but they will not. They know how to get away with it. Putting off the Melarkey bill by the Assembly to be killed in the Senate, or vetoed by the Governor on the ground of special legislation against any one corporation, was a fine stroke of policy. The thread of the railroad discourse will be passed over to the next legislature, two years hence. If our present legislators conclude to obey and abide by their platform resolutions an instructions relative to providing for a Constitutional Convention, well and good, and perfectly consistent; and any amendment to the Constitution which they may see fit to suggest will be eminently in order and perfectly proper. Let them go through the compiled statutes carefully and weed out all the obsolete and dead ­ letter propositions therein contained, and especially sit down on the lottery law, the practical result of which has merely and solely been to confine the gambling wickedness of lotteries to church fairs and Sunday School socials. This assumption of morality on the stature book, which is openly violated, nullified and repudiated by our moral and religious teachings, is a scandalous inconsistency and an infernal humbug. 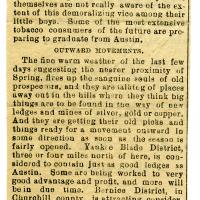