Last Wednesday afternoon, a procession of men, numbering 350, composed of members of the Miners' Unions of Virginia and Gold Hill, and outsiders of the working-class marshaled by the respective Presidents of the two Unions and headed by a drum and fife, marched down through Gold Hill and to where the Virginia and Truckee Railroad is being graded, just below Crown Point Ravine, at the lower end of town, with the avowed purpose of driving off the Chinese employed as graders along the line of the road. They had it all their own way, the Chinese gathering up their traps and leaving in a hurry as soon as the formidable army came in sight. They took to the sage-brush, and scattered over the hills in all directions, at a pretty lively rate.

The workmen marched down as far as the lower end of American Flat, effecting their object in the most complete manner, and telling the bosses of each gang that if they put Chinamen to work again they would get into trouble. The Sheriff was fully apprised of what was going to be done, and he and his deputies went along with the crowd, in order to interfere, perhaps, in case of any row. He read a proclamation commanding them to disperse, and his deputy read the riot act. This, the Sheriff says, is all he could nor can do in the matter; therefore he must be far more powerless than the Sheriff at White Pine. This action on the part of the workingmen effectually put a check on the construction of the railroad at present, for next day the company knocked off all the white laborers—bosses, cartmen and all. And so the matter stands. The great question asked now among everybody is, "What next?" Will the Governor declare Storey County in a state of insurrection, and send a big lot of soldiers to protect the railroad company in their rights and arrest the ringleaders in this movement, or will the railroad company try and get even in some other way? My own personal record shows me always to have been a strong friend of the Miners' Union and of workingmen generally; but when they turn aggressors, trample on the rights of other people, set the laws at defiance and deliberately quarrel with their own bread and butter, I must differ with them. The railroad company have had Chinese grading on the road ever since the first commencement, and in two weeks more the whole of the grading would have been finished and the Chinese discharged; therefore I look upon it as a very bad break on the part of the boys, waiting until this late date, or of even interfering at all with an inoffensive lot of laborers who were not interfering at all with them. By the same right of might, and with the same propriety, they might drive out all the Chinese workmen, cooks and flunkies in the country—yes, even the Chinese wood-packers, upon whom they will have to depend for wood this winter. The miners say the Chinese shall not work in these mines; that is all well enough, but surely in building the Pacific Railroad, the Carson Railroad or any other railroad, these Chinese as graders, like horses, mules or oxen, can be used cheaply and to most excellent advantage. In the above argument I don't wish anybody to infer that I want to marry a Chinaman—not much. The Chinese don't take either the Herald, the Gold Hill News or the Enterprise—they don't pay for my bread and butter.

The Big Frogs of Walker Lake.

My prospecting friend from Walker Lake, who told me of that shower of beef-bones, liver, etc., I wrote you about in one of my recent letters, has been telling me a large-sized frog story, which, I think, will do to print for the consideration of the scientific and those versed in natural history. He says there is a species of mammoth frog around the borders of that wonderful lake, about the size of small wheelbarrow. They are not very plenty, owing to their being such excellent eating, and the Indians killing them for food. They are a sort of dirty brown, or the color of a granite boulder, and can run as fast as a bear, taking to the sage-brush with great facility in case they are pursued and cut off from retreating into the lake. Their skins are covered with big, hard scales like a perch, impenetrable to common shot, and yielding only to a rifle ball, or a slug from a six-shooter. Dogs will not touch them more than once, owing to their disgusting outside slime, and, in fact, if they can only get hold of a dog they will kill him sure, simply by hugging him with both legs and arms, so to speak, and rolling with him into the lake, where the frog is at home under water for ten minutes at a time, and the dog is not. They feed principally on a species of fresh water clam, which abounds along the shore, and also on an occasionally unwary fish. In the summer, too, it is a favorite sport with them to burrow in the dry sand and go to sleep, with their mouth wide open, like a water bucket, occasionally waking up to slap their jaws together and swallow about a peck of flies. They change their skins once a year, and the way this is done is very interesting and ingenious. The new skin, forming inside, causes the old one to become loose, wrinkled and puffy, and when the proper period arrives, the frog just goes up to a big rock and rubs his nose, head and shoulder against it, until the skin breaks loose and he can roll it back on his neck; then he climbs into the nearest big sage brush or scrub cedar, hitches his hind feet into convenient forks of the branches, and jumps off, literally jumping out of his skin His greatest ambition on such occasions is to jump directly into the water, and if he succeeds he signifies his satisfaction by croaking chuckles and all sorts of sportive gyrations. And there the skin hangs by the hind legs on the bushes until discovered by some fortunate squaw, who eagerly appropriates it as a ready made garment for her papoose—a very convenient and stylish dress, that will last for years. All the little Indians about Walker Lake are dressed in frog skins.

Long faces for the last two or three weeks, have been indicative of a disgustingly low state of mining stocks—lower than ever before. Within the past two or three days, however, things have looked a little better, a general rise of stocks being experienced, based, I am happy to state, on better prospects in some of the leading mines.

In the Sierra Nevada mine a new and important development of ore was recently made in a winze below the car track tunnel, and about 160 feet from the surface. The vein is of a white gold-bearing ore, and as it is wider than the winze, its width can only be ascertained by a cross cut. It is being put through the mill, and car samples average over forty dollars assay, to the ton. The body of ore recently developed at the westerly end of the surface workings is more extensive than at first supposed, and will last for many months. Indeed the prospects of this excellent mine are better at present than for some time past. The second clean up of the mill for September, made on the 30th, yielded much better than the first. The usual monthly dividend of fifty cents per share, or $2.50 per foot, will be declared on or about the 6th instant. It is noticeable that, in all the late depression in stocks, the Sierra Nevada has stood firm, and subject to but little fluctuation.

Some few seams of clay, quartz and other encouraging indications have lately been struck in the Ophir tunnel, which is now 626 feet from the shaft, is now in 140 feet, and I think is the likeliest of the two to strike ore.

The new shaft of the Virginia Consolidated is 346 feet deep, and the hard streak recently struck is passed through and softer rock found.

Nothing new developed in the drifts at the lower level of the Gould & Curry. The old upper working yield forty tons of $45 ore per day.

In the Savage a deposit of ore assaying as high as $70, and four or five feet in width, has been developed in the east drift at the seventh station; and in a winze south of the shaft, between the sixth and seventh stations a very good body of ore has also been found. The effect is seen in the rise of the stock. The men were shut down in the mine Friday morning, but let out again last evening.

The Hale & Norcross yields about 175 tons of ore per day, and is looking very well indeed. The shaft is sunk to the depth of 1,100 feet, and is to be continued 100 feet more.

The Chollar-Potosi looks well, as usual, with some improvement in the ore of the New Tunnel section. The new hoisting works are in an advanced state towards completion.

The east drift at the lower level of the bullion is abandoned, and drifting north and south in the ledge is now being done with indifferent prospects.

Nothing new developed in the Yellow Jacket; all about the same as when I last wrote. The 700-foot level of the north mine will be cleaned out and put in good working condition this week.

The Overman Stock has taken quite a jump the last day or two, based on improvements in the ore at the 500-foot level.

The Occidental lower tunnel is in soft picking ledge matter, but not yet in the regular pay streak. The upper portion of the mine yields as usual. On the 9th instant the annual meeting of the stockholders will be held in this city for the choice of officers for the ensuing year.

Nothing new to report relative to the Lady Bryan. The new mill works to a charm, and is crushing at the rate of 30 pounds a day. The proprietors of this mine, apparently, have things to suit them at present.

The storehouse for patterns, at McCone's Nevada Foundry, Silver City, was destroyed by fire night before last, together with its valuable contents, consisting of patterns of the machinery of most of the mills of this State. The loss is estimated at $40,000, covered by $10,000 insurance in the Pacific Insurance Company. The fire was the work of an incendiary, and came near also destroying the residence of Mr. McCone, near by, which was only saved by the most strenuous exertions.

The Fakir of Vishnu finished a most successful engagement last evening at Piper's Opera House. He played the whole week to full houses every evening, and a crowded matinee Saturday afternoon. He is a first-class magician and legerdemainist., but the greatest attraction is his distribution of gifts, each evening giving away from $75 to $150 worth of all sorts of useful and desirable articles in the way of groceries, furniture, articles of dress, tin ware, livestock, poultry, can fruit, etc., all to lucky holders of prize tickets. He is bound to do well in this country. ALF. 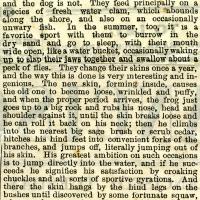