To-morrow evening, Adolph Sutro, the famous projector of the proposed tunnel from near Carson River to the Comstock Ledge, a distance of nearly four miles, and cutting the aforesaid ledge nearly 2,000 feet beneath the croppings thereof, is going to give a free public lecture on the subject at Piper's Opera House in this city. He will do the best he can to convince everybody of the truly vast importance this tunnel is to the mining interests of everybody here, and how impossible it will be to work the Comstock profitably at that depth without the Sutro Tunnel. It is my firm conviction, and has been for years, that this tunnel is absolutely necessary, and will have to be made sooner or later, but judging from past success and present promise, I begin to doubt Sutro's ability to carry it through to a successful completion. His business engineering talent and judgment are not good. He has managed poorly or he might have got the tunnel fairly started years ago, and a good portion of it completed, instead of being as it is now, nearly a grand project on paper. I wish him well, nevertheless.

I had some ore sent me three or four days ago to get assayed. It was from the Minnesota claim, three miles north of White Pine, near Morton & Wells' Three-mile Station, on the Elko road—a new discovery, of which I made mention in my last. Pulverizing what was sent me, I gave a third of it each to Wiegand & Co. and Ruhling & Co., Gold Hill, and the other third to Bousfield & Co., Virginia. The three assays turned out within about $100 of each other, and averaged a little over $3,500 to the ton. It certainly is very rich, even for White Pine, and if the fortunate proprietors can only find enough of it, they have got a fortune. They speak of their claim, however, as containing only two pay streaks of this ore, from one inch to ten inches in width. This is near the surface, but how much more abundant the ore may prove on sinking deeper remains to be seen. They propose getting out a few tons and sending it to be worked in some mill. This is the only sensible way of testing it, for ore assays in a new district are generally promising and fallacious humbugs; they won't do to bet on.

Most all the musicians who went from here to White Pine last fall, winter and spring, have returned, glad to bet back where employment and pay is more sure. Musicians were scarce here for a while last summer, aside from the little foreign boy and girl fiddlers who perambulated the streets, going about scraping fiddles as big as themselves in hopes somebody would give them two bits to get clear of them. Speaking of music, I want to tell you that the house I live in has been for several months past the jolliest place for cat music anybody ever knew of. Cats congregated here from all parts of the city; they nightly made it their headquarters. Under the floor and on top of the roof they gathered in huge squads and detachments, and of all infernal, unearthly squalling and diabolical choruses you ever heard—but description fails, I got several splendid shots at the devils with soda and beer bottles, making regular "ten-strikes" occasionally, but the only effect was to make them jump and tear round a little and shift to some other part of the house to have their sing out, so I finally resigned myself to the thing and let them alone; in fact I soon got so that I began to enjoy it and couldn't sleep well without a couple of dozen of their soothing voices in full blast. But here a couple of weeks ago, one of my neighbors put out a lot of strychnine meat and killed every confounded cat—never left one. I couldn't sleep for over a week, but I am all right again now; a man with a set of Scotch bagpipes has moved in next door.

At the Hale & Norcross hoisting works in this city, a day or two since, they received a lot of the coal recently discovered near Elko, and the experiment of burning it instead of wood is being tried. It costs about $30 per ton delivered here; and if it is ascertained to be cheaper fuel than wood to fire up under boilers with, it certainly will be substituted. There is plenty of it where this came from. It resembles English cannel coal somewhat, and burns with a fierce bright flame, being of a highly bituminous character.

The first of the iron for the railroad between here and Carson arrived at Reno a few days since, and the first loads of it were taken to Carson day before yesterday. The laying of the rails will commence at that end of the route and will be prosecuted just as fast as possible. The grading is nearly completed and the cars will be running inside of six weeks. The rails will not be laid at the rate of ten miles a day or anything like the fast rates in that respect achieved on the Central Pacific Railroad, for the reason that it is all curves—just the crookedest road you ever saw. The San Joaquin River is nothing to it.

During the past week stocks have got demoralized, and experienced quite a tumble, closing with a still declining tendency. Some stocks stood firm enough—the Sierra Nevada, for instance, and the Hale & Norcross—but others, such as the Yellow Jacket, drooped without any just or apparent cause. In some instances, however, the fall was justifiable and even a further decline would not bring them much below their actual merits.

The Sierra Nevada is getting along finely, as usual, both mine and mill always working at a very regular, steady-going, bullion-producing rate. The first clean-up for the present month was made last Thursday, and was, if anything, a little better than the average. The crude bullion, however, being sent to San Francisco, as usual, the precise figures cannot be given for a day or two. The state of the mine remains about the same, except that the body of ore recently developed in the car-track tunnel improves both in quality and quantity, as drifted upon. The same may be said of that developed at the westerly end of the surface pit. There is plenty of ore in sight to keep up the regular monthly dividends for a long time to come.

The Ophir west drift is now in nearly 600 feet, and the rock at present encountered is of rather more favorable character. The ledge must be met with soon, if ever.

The new shaft of the Virginia Consolidated is 305 feet deep to-day, and work is progressing favorably, as usual. No more water is encountered than is hoisted out with the soft rock and clay.

Nothing encouraging is yet found in drifting at the seventh or 1,160-foot level of the Gould & Curry—only porphyry, with seams of clay and quartz, but no ore. The main shaft of the mine, sunk from D street, and known as the Bonner Shaft, is 1,185 feet from the surface; the second is 425 feet from the surface, and through it the old upper workings of the mine are worked, yielding at present thirty tons of ore per day, assaying over $50 to the ton. The fourth station, 825 feet from the surface, contains no ore, there being none of any consequence found below the second station. It is being blocked up tightly at present, in order to dam up the water which flows from it, thus saving considerable expense in the pumping line. A large Root's patent blower, driven by a little three-horse power donkey engine, has just been put in operation to supply fresh air from the surface, by means of tubes to the lowest level as well as the second stations. The deeper sinking of the Savage shaft for a new level100 feet below the present lower level, was commenced last Thursday. The repairs to the shaft which have impeded the working of the mine, and lessened the production for some months past, are nearly completed, and good hopes are reasonably indulged in of good ore being found in sinking deeper. A full suit of the best quality of English steel wire cables for all three working compartments of the shaft are just put on, and everything works well. The Savage may come out yet.

In the Hale & Norcross, water still impedes westward drifting at the fourth level. The ore developed in raising from the fifth or lower level, shows considerable improvement in quality; in fact, the mine is looking exceedingly well throughout. The repairs to the shaft being concluded, sinking for a new level was commenced last Tuesday. The fifth or lower level is 1,000 feet from the top of the new shaft, and the proposed new level will be 100 feet deeper, or 1,100 feet below the surface. This new level will undoubtedly develop a vast amount of good ore.

The Chollar-Potosi yields about 175 tons of ore per day, and the excellent body of ore developed in the new tunnel section widens as it is developed northward. The hoisting works recently burned are being replaced by others of about the same size and capacity.

Drifting at the 1080-foot level of the Imperial-Empire is not yet commenced, as the repairs to the shaft are more extensive than anticipated. The usual quantity of ore is yielded by the old upper levels. On the Imperial there was levied last Thursday an assessment of $10 per share, aggregating $40,000, delinquent October 19th.

About 180 tons of ore per day is the yield of the Yellow Jacket south mine. The old north shaft will be cleared of water and mud down to the 700-foot level track floor about the last of the week. This is one of the best mines, if not the best, on the Comstock ledge at the present time, speaking in reference to both present and future prospects.

The Overman yields about 25 tons of $20 ore daily, with a good prospect for a future increase.

The annual meeting of the segregated Belcher Mining Company, for the election of officers, takes place October 5th, at San Francisco.

An assessment of $150 per share is levied on the American. This is a mine filled with low grade ore, at the south end of the Comstock, and is a purely speculative institution.

The lower tunnel of the Occidental is into the lead about 20 feet, and good ore is already found in little streaks. A better showing will be given very shortly when the main pay streak is cut into. The annual meeting of the Company will be held at the office of the company at Virginia, October 9, for the election of Trustees for the ensuing year.

The Lady Bryan looks better and better as far as recently made developments are concerned. At the special meeting of the Company held at Virginia last Tuesday, the proposition to increase the capital stock was adopted. Hereafter, the capital will be $2,700,000, divided into 18,000 shares, of $150 each—instead of the old capital of $1,800,000, divided into 6,000 shares, of$300 each.

The Martinetti's are drawing rather slim houses. They close at the Opera House tonight and go to Carson and elsewhere, returning to play at the Opera House next Thursday, Friday and Saturday evenings. Their performances are rather tame for this latitude. Alf. 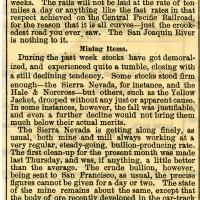