In a confidential conversation with Piper, last evening, he told me that George Francis Train was actually coming, notwithstanding all assertions to the contrary; that he would be here on the 20th. Now such may be the case, but I don't believe it. He has been coming for over a month, and very few here believe he is coming at all; in fact, that he is a baggage train—a carpet-bagger—and too easily run off the track, anyhow. Like the proposed grand squirting trial for "big coin" between some of the engine companies of the Virginia Fire Department, he is a fizzle.

That old profane expression of "thicker than fiddlers in hell" may not be precisely applicable to the numerousness of Insurance Agents in this section. Every other man dressed in good clothes is an insurance agent, and the way they do bore a fellow and make nuisances of themselves generally, is terrific. Old residents know them pretty well and keep tolerably clear of their blandishments, but woe unto any stranger from the country who happens along. He is at once systematically assailed, and if he don't leave town without his life safely insured in some company or other, it won't be their fault. If he escapes one, another will come at him in an entirely different shape. He can't possibly escape the fourth or fifth one. Even old residents are not safe from these social nuisances at all; they attack a fellow under the garb of friendship and in the most familiar style, so that you don't know or even suspect that your friend Jones has become one of them until he begins to talk life insurance to you. They all seem well enough, of course. Your friend Jones, too, if he finds you totally impervious to his kindly attempts, will, ten chances to one, ring in a genial good fellow on you, who knows it all, and before you know it you engage to take a $10,000 endowment policy in what you are thoroughly convinced is the best and safest company in the world; yet a day or two afterward a capital good boy from San Francisco, whom you have just discovered is the prince of good fellows, develops to be a full-blooded insurance agent, and you find yourself insured for $5,000 or $10,000 in still another company, which you are easily made to perceive and fully understand by demonstrated figures and tabular statements, is a much better company than the last mentioned, which, according to the system upon which it works, you now plainly see is sure to "bust up" within the eleven months and a half, mathematically sure calculation. You wonder that anybody should be so ignorant and reckless as to insure in any other company, yet in less than a week you are similarly brought to the conclusive belief that some other particular company is a long way the best of all, and up goes your coin. Thus it is that I am engaged for about $250,000 worth of endowment policies in various companies, when it would be rough on me to raise coin enough to pay up the premium for a $250 policy, and begin to look with suspicion on all well-dressed or sharp-looking chaps I make the acquaintance of, lest they should turn out to be insurance agents. Oh ! They approach you in all styles of shape and conversation, and hit you over your guard before you know it or think of fending off. The next insurance company should be one against being bored to death by insurance agents. One insuring against losses speculating in mining stocks would do well over here.

I don't know whether stocks have reached bottom or not, but they are certainly mighty low at present—away below zero. Most of the mines are now quoted below their actual merits, but some are not. These last are those which never or seldom have paid a dividend, and when they did had to assess the stockholders to do it. Some never have paid a dividend, and never will; and others, even those considered among leading mines, which have paid dividends in times past, will never do so again, according to present developed prospects. There is hope for all, though, and let us always hope for the best. For true, unbiased information on this particular subject, let your readers always read and critically consider our

Inside of three weeks the water and mud will all be out of the Yellow Jacket north shaft, and after the timbering thereof is properly repaired, which will take two or three weeks longer, and a winze is sunk to the 800-foot level, that portion of the mine will be in a proper condition for advantageous working. It contains a vast body of good paying ore at the lower levels. The south mine yields about 150 tons of ore per day from the lower levels, and the old Yolo tunnel in the surface workings of the north mine yields fifty tons. The Yellow Jacket is a good mine, and will come out all right this winter. The Crown Point yields nothing, as usual, and same as it has done for many a long month. No ore is developed at the 1,000-foot level, and still less at the 1,100. It was yielding but little ore, and looking rather sick before the fire, and since then it has yielded nothing and looks worse. It may recuperate and produce, by and by, but not just yet. It is a year next month since it paid a dividend.

The Kentuck still yields ore enough from the upper levels to run the Sunderland and Pioneer mills, and a winze connection of 100 feet was completed last evening from the 900-foot or lower level of the Yellow Jacket, up to the 800-foot or lower level of this mine, thus opening out good facilities for increased ore extraction, as well as a much needed circulation of air at that point. The Kentuck is fast recovering from the effects of that fatal fire, which still burns, hemmed in with certain and impassable boundaries.

The Overman has a huge body of 425 ore developed at its 400-foot level, sixty feet wide and over thirty feet high; now much larger it is will be found out as further development progresses. The mine yields about twenty-five tons per day, but will increase on that soon.

Nothing new to report in the Bullion or the Imperial-Empire. Both are doing the best possible with poor present prospects. The old Imperial yields about fifty tons per day, and the Empire about thirty.

The average yield of the Chollar-Potosi is about 200 tons per day; the assays of which average over $50. The mine is looking well throughout, and new bodies of good ore are being developed. The yield will be increased during the next week or two.

The Hale & Norcross yields about 100 tons per day on the average, principally from the fourth station, or next to the lowest level. Considerable ore is also coming from the upper levels. The yield from the lower levels will be better when the repairs to the shaft are completed.

The Savage is rather on the sick list, the yield dropping off very considerably during the last few weeks, both in quantity and quality. The prospect for more ore in sinking from the lowest level deeper is not good according to present indications. The ore dips south into the Hale & Norcross.

The Gould & Curry yields, as usual, about fifty tons of $45 ore from the old upper workings. The drift east, through the ledge at the lowest level, is getting along well.

The Ophir tunnel, being run west from the new shaft, at the 700-foot level thereof, is now in about 530 feet, with poor prospects of ever striking anything.

The Sierra Nevada still runs along at its regular old rate, paying regular monthly dividends, without fail, and with a prospect of long continuance, judging from the excellent management and the vast amount of ore in sight. The first clean-up of the mill for the present month will be made tomorrow, and it will be a good one.

The Occidental also gets along admirably, and not only pays its way, but pays for all improvements and prospecting. It is one of the regular paying mines of the county, and never calls for assessments. The new lower tunnel, over 1,000 feet in length, is in proximity to the ledge, and will cut it 400 feet below the present lowest working level. Great expectations are indulged in regarding it.

The Murphy and Mack Minstrels arrived yesterday, and put in their first appearance at Piper's Opera House last evening. They are billed to appear at Salt Lake just as soon as they can get there, where a good reception awaits them; therefore they will only appear here once more—this evening. They had a $750 house last evening, and will have another big one to-night. Our theatre-goers are much pleased with them. They should, however, run a little more on the great talent, both vocal, delineative and instrumental, that they are possessed of, and not at all on little trashy plays, which people of refined taste do not care to see more than the first time at most. Our people always appreciate, admire, and will patronize true talent. I don't know what comes next, unless George Francis Train does—the Martinettis, perhaps. 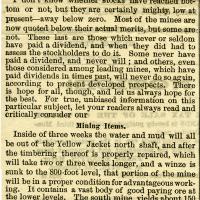