About Ways and Means.

Those seven wise men from the East composing the Congressional Committee on Ways and Means have been here. And they have gone again. They didn't stay long; at any rate, it didn't take long for them to stay what time they did, and they left precious little, if any, wiser than when they came. They arrived, via Donner Lake, Carson, Warm Springs, Empire and Gold Hill, last Wednesday, consigned to William Sharon, arriving in this city about 4 P. M. They were hilarious when they left the lake, and continued so throughout the trip. They must have driven at a fast rate, too, for they contrived to kill one valuable horse, and had to have another one at Warm Springs. Neither did they lack an abundance of good whiskey to keep up their flow of spirits, and aid them in seeing doubly well the sights and resources of the country. Sharon showed them his long water chute for sending railroad ties down out of the foothills back of Carson for his railroad between there and Virginia. When he showed them the long winding, serpentine route of that railroad, crookeder than the San Joaquin River, and when they arrived at Empire he showed them two of his quartz mills, used for reducing ore from his mines in this vicinity, and the transportation of which ore to these and other mills of his on Carson River, was the main object in constructing the road. At Gold Hill he showed them the Yellow Jacket and other mines, principally owned and controlled by him, also some at Virginia; and after showing them the California Bank in this city, Sharon took them to his private residence and treated them to a sumptuous banquet, which lasted all the evening—and next morning too. They had a glorious time. They managed to get their obfusticated ideas collected sufficiently next forenoon to go with Sharon and examine the interior of the Yellow Jacket mine, and at noon they were summarily shipped off by private conveyance to Reno, en route for where they came from in the East.

Sutro Tries to Call their Attention.

Fully appreciating the importance of having this Committee take a look at his famous projected tunnel from Carson River to the Comstock Ledge, a distance of four miles, and through which these mines can all be worked to a depth of 2,000 feet or more, Adolph Sutro, the far-seeing and enterprising projector thereof, came here all the way from San Francisco just on purpose to see, converse with, and show those gentlemen all the points in the case. He tried his prettiest to edge himself in upon their attention, but Sharon was too much for him, and overshadowed all his hopes. Sutro, however is a man of resources, and so he quietly watched his opportunity and managed to secure a couple of the Committee next morning, and get them up on the roof of the International, where they put up. He spread his map before them, showed them the profiles, diagrams and estimates, and then pointed out the lay of the land, topographical localities and course of the tunnel. They were struck with the idea immediately, and agreed with Sutro in every respect. He took them on top of a high building, but he did not promise them half the stock in that tunnel if they would fall down and worship him. He talked good square sense to them, however, and they may be able to digest some of it.

Last Thursday evening, as Senator William M. Stewart was on the coach in front of Wells, Fargo & Co.'s, about starting for Reno, he was suddenly seized with some sort of a fit. His outcries were terrible, and quite a sensation was created for a short time. There were plenty to rush to his assistance, and he was taken at once to the International, where every requisite attention was rendered him. He was insensible for some minutes, and remained speechless for half an hour, but afterward rapidly recovered and was all right next morning.

Last Wednesday afternoon a drunken fellow named George Hall shot Emerson Cain, an old man nearly sixty years of age, employed as weigh-master at the Chollar-Potosi works, inflicting a very severe and dangerous wound, without any provocation whatever. Hall came past the works, and made such an awkward job of climbing a high bank near by, that some of the workmen laughed at him considerably. This irritated him so, that when he got on top of the bank he drew a six-shooter, and soon after seeing Cain come out of his office near by, he raised his pistol, took deliberate aim across his left wrist, and fired. The distance was nearly 100 yards, but the ball hit the old man in the right breast, broke a rib, and glancing around under the skin and flesh, was afterwards taken out of his back. He is doing as well as could be expected under the circumstances. As soon as Hall saw the effect of his shot he left in a hurry, but was soon afterwards overtaken and lodged in the County Jail, where he still lies awaiting the result of Cain's wound before the examination takes place. He feels that he must have been crazy. Hardly.

Only one case of small-pox has developed itself during this past week, but there is plenty of scarlet fever, diphtheria, cholera morbus, whooping cough, etc., especially among children, proving fatal in many instances. A sort of dumb ague, commencing with the cholera morbus, is said to be quite prevalent among the millmen on Carson River.

We have had some pretty hot weather this season, but the thermometer has never run higher than 90 degrees in the shade; it is two or three degrees warmer at Gold Hill than here, as a general thing. During the past week we have had showers of rain nearly every day—some pretty heavy ones—which had the effect to cool and purify the air. To-day, however, it is hot and sultry again, with the thermometer at 88 degrees in the shade.

Senator Nye is expected here within a day or two, as a telegram from him at Chicago states that he is on his way. The old "Gray Eagle" didn't state what he is after. A detachment of those Chicago merchants who have been prospecting and sight-seeing about California for the last two or three weeks are also expected here very shortly.

The foot-pad, said to infest the Divide between here and Gold Hill, has apparently changed the scene of his exploits to Gold Canon, half-way between Gold Hill and Silver City. Last Wednesday evening he waylaid Ed. Ruffner, engineer of the Ione mill, but, on taking a near view, let him go on, remarking, "You are not the man I am looking for." The next evening he waylaid John Minnoch, near the Justice-Independent works, and robbed him of his watch and chain, twelve dollars in cash and whatever else he had worth stealing. The very next evening he went to John's cabin, in that vicinity, before he got home, took the key from its usual hiding place, entered, took blankets, bedding, clock, and all except the bedstead, cookstove and water bucket. John stays at home evenings now, and swears that the scoundrel shan't carry off his cabin, too, if he can help it. That foot-pad is liable to smell powder and experience cold lead one of these nights. There's a job put up on him.

The fire still burns in the Crown Point and Kentuck mines, but is not supposed to extend into the Yellow Jacket. All the drifts communicating with the region where the fire is are still tightly closed, but the escaping gas and smoke indicate the existence of that obstinate and unquenchable fire. It may continue burning for many a long month yet. Meanwhile the three crippled mines are being worked as best they may, the companies each striving to work under or around the fire, and with good success.

The Kentuck yields an increased quantity of better ore from its upper level, and a good opening is being made into the lower portion of the mine through the 900-foot level of the Yellow Jacket, and as there is plenty of good ore at that point, very satisfactory developments are confidently looked for. The stock has risen very materially in consequence of this move.

The Yellow Jacket yields over 200 tons per day from the 800 and 900-foot levels of the south mine and the old Yolo tunnel in the upper workings of the north mine. It will take a month yet probably before the water is all bailed out of the north shaft, as there is still 150 feet of it, and a large space of the ledge northward of the shaft has to be drained by it. There is an immense body of excellent pay ore in this portion of the mine, and in two months from now it will be coming out of there.

The Crown Point still remains a non-producing mine, and is fully entitled to a good heavy assessment soon. Money must be had to work the mine, and not a pound of ore is produced. The explorations at the 1,000-foot level, has evidently reached the vicinity of the west wall, for they struck a huge body of water last Thursday night, about two hundred feet from the shaft, which increased in spite of all pumping and bailing arrangements, and soon drove the men out of the drift, rising thee feet above the top of the station. It then began to decrease, and is now very materially reduced.

The Belcher is looking better, and showing more good ore at present than for a long time past. It will be a producing mine soon. A drift is being commenced to run northeasterly, and connect with the Crown Point 900-foot level, giving increased and important air circulation to both mines.

Some very promising developments are being made in the Justice-Independent, from the 200-foot level up. An assessment of $5 per share, aggregating $15,000, was levied last Saturday, delinquent August 24.

At the Imperial-Empire a hoisting reel was broken last Wednesday, causing a stoppage to the shaft repairs, also a great rise of water in the mine. The reel is repaired, and hoisting water is progressing to-day at a lively rate. The usual amount of ore is yielded from the upper levels.

The second clean-up of the Sierra Nevada for the present month was made yesterday, and it yielded fully up to the rich general average. This mine pays regularly and well, and the body of excellent pay ore is apparently inexhaustible. The finances of the company are in an exceedingly healthy state, and another dividend may be looked for soon. It is a good mine, well managed.

The Gould & Curry continues to yield about forty-five tons of ore per day from the upper workings, averaging about $50. The drift east through the ledge, from the seventh station, has progressed about ten feet, and is going ahead finely with no encouraging indications as yet.

I have nothing further to add, except that Tom Thumb and the rest of his little crowd are advertised to appear at Piper's Opera House next Wednesday and Thursday evenings. 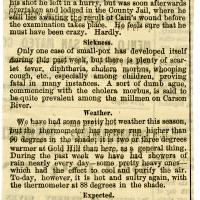