The grading for the railroad between Virginia and Carson is one-half completed, and in less than two months from now will be entirely finished, tunnels and all. Unless there is some unexpected delay in procuring the requisite supply of iron the track will be laid and the car running by October. The work thus far has been prosecuted with most effectual energy and ability, very creditable to all concerned. It certainly is a very crooked road, but this could not well be avoided, in view of the great rise to be overcome between the two points. The greatest fault I have to find with the location of it consists in the fact that in crossing Gold Canyon, on Main street, at the upper end of this town, the rails are to be laid on a level with the street, instead of being carried across over the street on a proper trestle bridge, high enough to allow teams of all descriptions to pass beneath it, out of all danger of collision. This might and ought to have been done by all means, and the company will realize the importance of the idea this next winter. There is probably no street in the world which is subjected to harder wear or severer usage than this. The grade being steep, the numerous heavy quartz teams all have to pass down it with locked wheels, especially in winter, when it is slippery. This has the effect to grind and tear the street terribly, particularly when rough locks have to be used. The railroad grade across it will make a very awkward sort of a pitch or offset in it, even if the teams do not tear out the rails in passing over them. It will keep one man there steadily, taking care of the track and keeping it clear of mud and other obstructions. A more eligible place for collisions, too, could hardly be contrived, for even after this railroad is completed, and has to a certain degree done away with quartz teaming, there will still be plenty of teams hauling quartz to the mills in Gold Canon, as well as trains of huge wagons coming in from California loaded with merchandise, same as they do now. Those long teams of twelve and fourteen mules, with two or three wagons attached, do not travel fast, especially up a steep hill, and being hidden from sight at that crossing by the houses on each side of the street, the chances are that the locomotive would come upon them unawares, especially as it approaches in a short curve from either way, and on the north side from a tunnel. An ox team would stand no show at all. In case of a collision the engineer would be blameless, for he could not possibly see a team crossing in time to avoid it, and the railroad proprietors would simply have to foot the bills. Well, time will show how things will operate at that point. We shall see.

About six o'clock last evening, on the aforesaid railroad, at American Flat, by the premature explosion of a heavy blast, one workman was blown forty feet into the air, and, falling among some rock, was almost instantly killed. He was literally torn to pieces, his bowels strewn upon the ground, and most of his bones broken. Another man working with him, was terribly cut and bruised, but not seriously injured.

David Miller, the young man of whom I made mention in my last, as being fatally injured in falling seventy feet down a winze in the Savage mine, last Saturday, died yesterday morning, having lived just a week with his back broken. The lower part of his body continued perfectly paralyzed from the first, never recovering the least degree of sensation. He was buried this afternoon by the Canadian Relief Society, of which he was a member.

John E. Owens takes well with our theatre goers of Virginia and Gold Hill, and Piper's Opera House is filled nightly to witness his serio-comic and decidedly popular delineations. I think he can twist his physiognomy into more whimsical shapes than anybody else on the coast. He is well supported by an excellent dramatic company. James Stark is still at the International, Virginia, slowly recovering from his terrible stroke of paralysis. He is able to walk about a little, but cannot talk much. The Champion Circus performs at Empire to-night, at Silver City to-morrow night, and Thursday evening at Gold Hill, for the benefit of Liberty Engine Company, No. 1.

This famous mine is being worked at present with far greater energy and double the force of hands than before the fire—some 400 miners being employed. The pay roll for the last month amounted to $20,000, and this month it will be considerably larger. One reason of this extraordinary number of men is that the drift connections formerly existing between that mine and the Kentuck, furnishing a free circulation of air, being now closed on account of the fire, the air is very hot and impure; consequently eight hour shifts are adopted. The fire still burns in the Kentuck and Crown Point, but is blockaded on all sides. A large number of men, recently employed on the Pacific Railroad, are now working in the Yellow Jacket, and they, as well as the old hands in the mine, as might be expected, have a strong impression of the dangers attendant upon working in those subterranean regions, since the recent terrible calamity. All are ready to rush out at the slightest alarm.

Considerable trepidation was created among some of the miners yesterday, by a back current of air driving some gaseous smoke through from the Kentuck into the Yellow Jacket, and some of the men came to the surface, but the gas subsiding, all soon were at work as before. In order to counteract the effects of the bad air, the miners have bottles of hartshorn and bay rum with them down in the mine, to take a smell at occasionally. About ten o'clock this forenoon, there was a powerful alarm created at the800-foot level, and a general rush was made for the cages; one or two men being said to have been already overpowered by the dreaded gas and left for dead in the drift. Up they come to the surface, and directly fresh hands ventured down to rescue the victims, if possible. They were found alive and kicking, and able to tell their own story, which was thusly: One of them, feeling like taking a sniff of something reviving, picked up his hartshorn bottle, which in the extreme hot atmosphere had become considerably heated, and on giving it a bit of a shake the thing bursted, sending forth such a powerful smell that it knocked him down. A companion near by, seeing him fall, thought of the fatal gas, and instead of stopping to assist him, started like a race horse for the cage in the shaft. He did not run a dozen yards, however, before he hit his head against a low cap timber and knocked himself over backward. He was the only one hurt. When all was explained work went on as before.

In my last I spoke of the excellent prospects and bullion products of this valuable mine; also, of it being rumored that a dividend would soon be declared. This idea was based upon the great amount of rich ore developed in the upper workings of the mine, the great yield of gold bullion during the past month—more than ever before—and the still better class of ore being milled for the present month. Last month the yield was over $23,000, upwards of $13,000. This month the yield will doubtless run up to over $30,000. Day before yesterday a dividend of $2.50 per share was declared payable on the 10th instant. This is quite a novelty in its way, being the first dividend ever declared on that mine, which for the last eight or nine years has been steadily worked and assessments regularly levied upon it. This change in finances is due entirely to the present Board of Trustees, and T. F. Smith, the Superintendent, who brought his mining knowledge pretty effectually to bear in the case and soon nosed out the present developed rich and extensive deposit of ore. When Smith took charge of the mine and mill there was an assessment of $12.50 per share already levied, but he soon got to producing so much bullion that it was deemed expedient to rescind that assessment, greatly to the joy of the anxious stockholders. There has been no assessment thought of since, but such an accumulation of funds in the treasury, that not only this little dividend can be easily spared, but it will be followed up monthly hereafter, and most probably increased. Day before yesterday a decidedly novel style of a blast was let off at the mine. An inch and a half hole was drilled to the depth of fifteen feet in a bank of soft ore, and a couple of cartridges of giant powder being shoved down to the bottom, it was exploded. It did not crack the earth, but merely made a good sized cavity in the immediate vicinity. Into this was then poured two kegs of common blasting powder, which, on being exploded, lifted the bank, throwing out tons upon tons of very rich ore, in much of which plenty of free gold was visible. It is better ore than yet found in the mine, and the mill is now hard at work crushing it at the rate of forty-five tons per day. 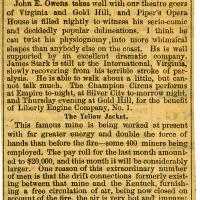