I am happy to be able to state that work is again commenced in the three recently disabled mines of Gold Hill—the three principal bullion producing mines. A temporary drift connection was yesterday made through the caved debris in the east ledge, at the 700-foot level, allowing a free draft of air from the Yellow Jacket mine, through the Kentuck and out of the Crown Point shaft, just as it used to be before the great disaster. This directly had the expected effect to free the Yellow Jack entirely of foul air and also the Kentuck to a great extent. They commenced hoisting ore again from the upper levels of the Kentuck last night, after a lapse of over three weeks, and the work has recommenced in the Yellow Jacket mine this morning, clearing out waste and caved debris, and cleaning up generally , preparatory to hoisting ore, which they will commence doing to-morrow. As to the Crown Point, the air is too bad for mining operations just yet; a strong current of hot, gaseous, smoky vapor is pouring out through the shaft, and men can work down in the mine but a short time without getting sick, or having to come out for fresh air. They are re-timbering the burnt portion of the 700-foot station. The air is fast improving, and the prospects are that regular mining operations will be recommenced in the Crown Point, also, within the next day or two.

Appears to be entirely extinguished, unless it may be that a little still smolders among the caved debris of the east ledge, assisting to keep the air bad for a short time longer. Its principal ravages seem to have been in the Kentuck and Crown Point. The Yellow Jacket escaped with slight damage, but the Kentuck evidently fared the worst of the three. Neither mine, however, has sustained any very permanent damage. The terrible loss of human life is by far the worst feature in this distressing calamity.

The body of George Edwards was taken form a drift between the 600 and 500-foot levels of the Kentuck mine on Tuesday afternoon. The body was discovered the day before, but the fatal gas of the mine was so bad that the men could not safely stay long enough to remove the corpse; but subsequently some lime was sent down and thrown upon it, in order to destroy the effluvia as much as possible. Singular as it may appear, when the body was finally moved to the surface, it was found to be but little decomposed, in fact was quite firm, and easily handled and had but little offensive stench about it. It had lost considerably in weight, however. What combination of gases or conditions of the hot, damp steam-permeated atmosphere in that deep, dark tomb, over 500 feet down in the bosom of the earth, thus preserved this human body, I leave for the consideration of those more versed in chemical science. Deceased was about thirty-five years of age; and his funeral took place yesterday. Together with Daniel O'Neil, Thomas Laity and A. Reinay, Edwards was thought to be at the 600-foot level, but he had evidently sought refuge or escape by climbing through the stope floors and drifts above. A pretty thorough search has failed to discover the other bodies, and they may eventually be found buried beneath some caved portion of the mine. The body of Martin Cloony is still in the 800-foot level of the Kentuck.

Your Virginia correspondent has committed, and apparently still persists in a very strange, unreasonable, and indeed wicked perversion of the real truth, regarding the so-called explosion in the mines at the time the fire was fully discovered and the miners were frantically endeavoring to escape with their lives. And his misrepresentations, I perceive, have even led you into almost an indorsement of his views in your editorial columns. The HERALD has its influence, and is extensively circulated and read here; consequently when your editorial of last Saturday morning, headed "Topics of the Day" was read, it naturally created much remark, and as it very seriously affected the integrity of the officers of the mines in question, they could not fail to seriously consider it. I quote the following from the editorial aforesaid:

"The cause alleged for recent destruction of life in the mines at Gold Hill—as given by our correspondent—was undoubtedly the real explanation of the tragedy. Under date of the 21st our correspondent writes from Virginia City: 'investigations in the Kentuck corroborate my statement about the powder. The Kentuck magazine was blown to pieces; and a miner, who saw the ruins and informed me about it, stated that, at the time of the disaster, there were forty kegs of blasting powder and two boxes of giant powder in the vaults. As to the "sixty kegs" reported to have been sent down a short time before the disaster, I have two good, reliable witnesses to the fact, and the companies dare not deny it. You will never see a statement direct of this fact in either of the papers published in this county; but it is in vain that they deny the truth of the statement.' We do not understand why the officers of the companies should feel sensitive about the facts appearing."

Now, then, I am fully authorized, in the names of each and every one of the resident officers of the Yellow Jacket, Kentuck and Crown Point mines, including Presidents, Superintendents, Secretaries, Foremen, underground or above, and everybody else in authority in or about those mines, to deny in toto every word and every line of the above quotation. According to their best knowledge and belief, that Virginia correspondent has not been down here at the scene of the disaster since the first dat. At any rate they are charitably willing to believe so, and the aforesaid writer only obtained his information through floating, idle rumors or perverse stories told him by irresponsible individuals.

In the first place, it is an absurdity to suppose that a magazine of powder is kept down in any of the mines of the Comstock, amid the usual dampness. The magazines of the three mines in question, as I stated in my last letter, are at or near the surface, many hundreds of feet away from where the fire was, and the powder stored in them is still there. The Kentuck magazine is in the hoisting works of the mine, above the surface. The sort of cupboard down at the 600-foot level of the mine, where a little powder for present use was sometimes temporarily kept, together with fuse, candles, gads, and other articles, and which is doubtless the "magazine" that correspondent refers to, still remains there wholly unscathed. There was in it at the time of the fire about half a keg of common blasting powder, and three or four pounds of Giant powder, but this was removed unexploded last Saturday.

There was one keg of powder in the 600-foot level, but the fire did not go within 150 feet of it, and there it still remains in a rather damp condition. There was no other powder in the Kentuck mine. In the Yellow Jacket all the powder there was below was at the 900-foot or lower level, where blasting was actively being carried on. There was six and a half kegs of it, but this was all safely taken out the first evening, after the bodies of the miners at that level were recovered, and subsequently placed in the magazine of the mine, where it still is. In the Crown Point there were three cans of powder—perhaps ten pounds in all—but neither of them were where the fire went. They are still there, and pretty well steamed. Not an ounce of powder exploded in either of the mines. In conclusion, those mining officers are only "sensitive" about the untruths which have appeared; and if your Virginian correspondent will only take pleasure in showing him the facts and true points in the case, just as I have related them. 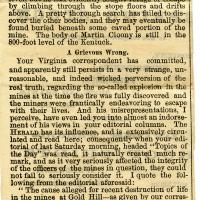