In the Gold Hill News of last evening the local editor refers to the statement contained in my letter of April 12th, that sixty kegs of blasting powder were sent down the Yellow Jacket shaft and placed in the Kentuck magazine the day before the late terrible disaster, characterizing it as "wildly imaginative." The principal editor of the News had previously alluded to my telegram of the same fact, but in language so indecent that I did not feel called upon to notice it.

As the last reference is courteous, I have simply to say, that my informant is a gentleman of the highest respectability, and that he also gave me the names of two other gentlemen who were present and could corroborate his statement. He told me that on the afternoon of April 6th he saw three cages, loaded with kegs of Santa Cruz blasting powder, sent down the west compartment of the Yellow Jacket shaft. While he did not county the kegs, his impression was that the number was about sixty; but certainly forty. That it went to the Kentuck magazine was, of course, a matter of conjecture only; but that naturally seemed the most probable place of deposit.

As a matter of course, like any other newspaper correspondent, considering my source of information perfectly reliable, I telegraphed and wrote the fact to THE HERALD, as I would have done any other item relative to the disaster, which came to my knowledge. I had no intention whatsoever of reflecting upon any of the officers of any of the mining companies concerned; but simply to give THE HERALD the benefit of such views as I could collect and deemed reliable. I know nothing about the amount of powder it is usual to keep on hand in the mines, or the amount of precaution customary; although, I confess, it seemed to me at the time that this was rather a large quantity, unless it was stored in some place of almost positive safety.

Since the mines were opened and investigations made, I am informed by a miner, who claims to have been present and seen the ruins, that the Kentuck magazine is blown to pieces. He also told me that there had been forty kegs of blasting powder and two boxes of giant powder there. I suppose he told me the truth; especially as it coincides so well with the other statement made to me by a gentleman whose veracity I know to be unimpeachable.

I confess I was very much surprised, and somewhat indignant, at the attack of the principal editor of the News. Not that it referred to me; for, if it concerned anybody, it was my informant. I could but wonder why all this vituperation at the announcement of a fact involving no criminality, nor perhaps even any carelessness. My wonder was still farther increased when a very distinguished and well-known citizen of Virginia, himself introducing the conversation, informed me "that certain parties were very sensitive on the subject of powder, in connection with the disaster; and he could not account for it." As the Gold Hill News has never, I believe, or but occasionally at most, alluded to the fact of there having been an explosion just preceding the alarm, which had force sufficient to raise the cage at the Crown Point shaft one or two feet, although weighing eleven hundred pounds; as it never published the general testimony taken before the Coroner, highly interesting as it is, but left it to the Herald to make known to the News' readers what the sworn facts relative to the calamity were, where nearly every witness speaks of the explosion—the one nearest the point of fire and saved from death with the most difficulty, averring that he smelt no smoke but only felt the effects of a blast—I think the gentleman referred to had some reason for his surprise. It was doubtless much more convenient, as I have observed has been invariably the case here whenever mining accidents have occurred, to lay the blame, if there be, at the door of the poor toilers who daily risk life and limb in resting wealth from the bowels of the earth, of which they receive but a hard earned pittance. They are not advertisers and it is safer to place on their heads the origin of any misadventure than to even unintentionally and by chance cast the slightest shadow of a shade upon those who, by virtue of position, can be of pecuniary benefit.

Therefore it is gravely printed that the fire undoubtedly was caused by a candle being left resting against a post by some careless miner; and this in the face of the sworn statement before the Coroner, that there were no candles anywhere in the vicinity.

Should any one desire to read really "wildly imaginative" literature in connection with this catastrophe, I recommend them to that portion of a late Gold Hill letter to THE HERALD, which estimates the damage to the Crown Point and Kentuck as nothing; and that to the Yellow Jacket as covered by a few hundred dollars and a couple of days' shoveling.

Probable Origin of the Fire.

I had not intended ever writing my opinion of the origin of the fire in the mines, but leave it to be judged from the developed facts. I believe I will change my mind and give my theory for what it is worth, with the others being put.

I would premise by saying that the draft at or near the supposed point of fire has always been so strong, since the three mines were connected, that it would blow a man's hat off. To use candles there at all it was necessary to place them in a box. This, of itself, ought to effectually dispose of the fire-damp theory.

If it was an ordinary fire, how happened it that almost in an instant three or four levels, running many hundreds of feet, with innumerable side drifts and winzes, and three large shafts, became filled with smoke and gas so dense and suffocating as to at once, as it were, extinguish life? If the posts and logging were in flames, why was it that the smoke, gas or vapor (call it which ever you will) which issued from the Crown Point shaft the whole of the first day had a light, hazy appearance, like steam or mist, while thenceforth it was as black as night? Why was it that a person could not inhale it even for a few moments without experiencing nausea and violent pains in the head, lasting some for hours?

My idea is, and always has been, that the giant powder contained in the Kentuck magazine ignited spontaneously and slowly smoldered, generating quantities of gas sufficient to fill the adjacent drifts, and the vilest and most poisonous exhalation that can be imagined, as any one who has ever come in contact with it confined will testify—besides probably setting fire to the timbering, until the blasting-powder was reached, the explosion of which instantly forced this atmosphere of death throughout the three mines

"Alas ! for the Rarity of Christian Charity."

The press here have seen fit, in recent issues, to highly laud the "generosity" of San Francisco towards those who have been thrown upon our charity by the Gold Hill disaster, whose numbers have now been ascertained to be much greater than was at first supposed.

From their praise I respectfully beg leave to dissent. To my mind, San Francisco, in this matter, has neither been munificent nor even liberal, but quite the contrary.

She has contributed so far about $4,000, truly an immense sum for the metropolis of the Pacific, whose estimated wealth is counted at two hundred millions. There is scarcely a little New England town where a larger sum could not be raised under similar circumstances.

Of her donation nearly one-half comes from the brokers; the balance, except a few hundreds from private individuals, from the efforts of college students, and those of members of the theatrical profession, who are always in the van to offer their aid in behalf of misfortune. To them be all honor.

Neither the banks, merchants nor incorporated companies of the Bay City have given anything that I am aware of. And, greatest shame of all, in a Christian land (if I am rightly informed), not a dollar has been collected or attempted to be collected at any of the many churches in your city, to aid the widow and the orphan.

The recent strike in the Norcross, and the continued improvement in the appearance of several other mines, has greatly elated the community here, and everything bids fair for a most prosperous summer, so far as the stock market is concerned. The excitement is constantly on the increase, as shares keep going steadily up, and the crowds around the brokers' offices make one think of the good old times. 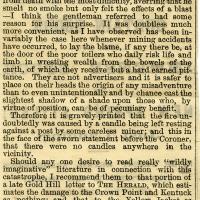