In spite of the most active and strenuous means adopted to extinguish that obstinate fire which has existed in our mines for over two weeks, it is still burning, and in reality the prospects for getting entirely rid of it immediately are not especially encouraging, even now. Water and steam have been alternatively used to as good effect as possible, but the grand difficulty still is to get a fair rake at the enemy. It has been extinguished in several places where found, but at the present time it is burning principally between the 700 and 600-foot levels of the Kentuck mine, near the Yellow Jacket line, in the east ledge. How far it extends into the latter mine is not well known, as no one can either work or explore there in the drifts at that level, by reason of the deadly gas and smoke which is far worse than in either of the other mines. In order to stop the draft of air so encouraging to the fire, the 700-foot station of the Yellow Jacket shaft is closely blocked, and the gaseous smoke comes out through the 600-foot level, showing that the fire extends upward. The Crown Point shaft is comparatively free, although considerable gaseous vapor finds exit through it; but the Kentuck shaft is all right in that respect, the draft setting down it instead of up. Men go down and up these shafts with perfect freedom and impunity, and both mining companies are cooperating with each other in fighting the fire. They send both water and steam for that purpose down the Crown Point shaft, an all the caved debris, which is cleaned away in order to get at the fire, is taken out through the Kentuck shaft. The fire smolders among the filled-in waste and debris let down by the burned timbering, and its whereabouts is only indicated by the rising smoke and gas. Therefore, considering the very limited opportunities offered by drifts and tunnels, any experienced miner or person posted in such matters, can easily realize the difficulty of getting at the fire to any sort of advantage at all. It seems this evening to be somewhat more subdued than it was yesterday, or it is dying out for want of material.

The Yellow Jacket hoisting-works building is still closed to all outsiders, and since the killing of Williams, last Sunday night, from being lost off the cage in that shaft, while in a state of asphyxiation, nothing of any consequence has been done there. The air is good enough in all three of the mines below the 600 and 700-foot levels. The firemen and miners are working at the 700-foot level, but are occasionally made sick by the hot smoke and gas, but it is so bad at the 600-foot, that no one can survive there. At that level, in the Crown Point mine, is where four of the still unrecovered bodies lie; the other is yet at the 800-foot level of the Kentuck.

You have read and heard a great deal about a great explosion of Giant powder or a lot of kegs of common blasting powder down there, but the most popular idea is that it was a great explosion of foul gas, which at once tilled every unfortunate miner within reach. No loud report is spoken of, but it is described as simply a sudden, quick, heavy puff of air, which blew out all the candles below, and came with considerable force up the shaft, visibly affecting the heavy cage hung in the mouth of it at the surface, and blowing dust and chips up towards the roof of the building overhead. Now, living here as I do, and this unfortunate affair in all its phases coming particularly within my line of business, I claim to be somewhat posted, or at least ought to be if I am not. The miners and officers of the mines—than whom there can be no better authority—tell me that there was no giant powder where that fire could reach it, and if there was it would simply burn up like so much wet sawdust, with no explosion at all. They also say there was no blasting powder within reach of the fire, and if there was, no one certainly smelt the inevitable smoke and stench of such explosion; neither would it have killed the men at the lower levels. Now, in regard to the gas explosion theory, I will give the following extracts on that point from an ably written article in the Art Supplement of Appleton's Journal:

A discharge of cannon loaded with canister shot, and fired point blank into a crowd; a powder magazine taking fire in the midst of a body of workmen; a gasometer exploding in a factory, can hardly give an idea of an explosion of fire damp suddenly overtaking the miner. The explosion spreads instantly into all the galleries of the mine—a roaring whirlwind of flaming air destroys everything it encounters, overthrowing trams, barricades, etc. The men are blinded, thrown down, scorched, and sometimes burned to a cinder; often their clothes taking fire, and not unfrequently they are buried beneath the ruins of the fallen roof. When an attempt is made to fly to their assistance, there is not time to rescue them—there are only corpses left which are scarcely recognizable. The calamity spares nobody, even though as many as one or two hundred miners may be at work—death extends over the whole mine where the explosive gas was present."

I saw nearly every corpse which was taken out of these mines. Those taken out the first day were not even discolored, but looked as though they had merely fallen asleep. They were from the lower levels of the Yellow Jacket and Kentuck. Those subsequently recovered were distorted, swollen and discolored; but this was evidently owing wholly to the trying circumstances of their death, the hot, confined atmosphere, and similar natural causes. One thing is certain—not one of them had his hair, eyebrows or whiskers singed in the least.

My theory of this so-called explosion, supported by the opinions of practical men, is simply this: That fire, according to the testimony at the Coroner's inquest, had been burning four or five hours before it was fully discovered and the alarm given, consequently the timbers being burned allowed the entire mass of waste rock filled into the worked out space overhead, which they supported at that point, to give way and fall bodily, completely filling the space below that 800-foot level, where it was found that same day by the adventurous firemen and miners, and where it still remains. The effect of this cave, like all similar caves, was to drive the displaced air suddenly and forcibly before it. In some instances the air has been thus so forcibly expelled as to not only blow out all the lights, but also to blow men prostrate to the ground. In this instance it doubtless suddenly also expelled the foul, deadly smoke and gas which had been quietly generating during those hours since the fire commenced, driving it through the other drifts and passages with the suddenness which so unexpectedly overtook so many unfortunate victims. Then there was a consequent reaction and subsidence of the fatal gas after it had done its deadly work, allowing men to go down only a few hours afterwards and bring up the corpses with impunity. This theory may not be the correct one, but it is based upon fact and common sense, and that's pretty good. At any rate it will do until a better one is produced.

As to those vague, nonsensical rumors so prevalent, not only in your city but in other localities, that this fire was a put up job by certain interested parties for stock-speculating purposes, the idea is too diabolically absurd to merit even a passing notice from A. D. 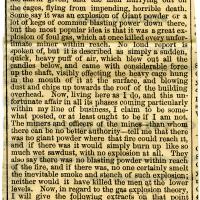