Has come and gone, but in the hurry and bustle consequent on the preparations for and celebration of that grand national day, I came near forgetting you, but you see I have not. We celebrated the day here with far more than usual spirit in every sense of the word, as is shown by the records of the police court the next day, although the officers were as lenient as their conscience would allow, and took none to the station house except those who were disorderly as well as very drunk. The procession numbered about a thousand persons, as only the fire department, military, and a few of the civic societies turned out, the citizens generally preferring to act the part of spectators, or to go into fun on their own book. For its size, it was the most beautiful procession I ever saw in my life. There were three companies of military marching proudly with their fine uniforms and gleaming muskets and bayonets. Our efficient fire department followed, numbering nearly five hundred men, in the usual sanguinary red shirt, and fireman's hat, their seven machines beautifully trimmed with flowers, wreaths, flags, etc., and three of the machines bore each a live Goddess of Liberty, dressed in appropriate costume, with helmet, shield, pole with liberty cap on it etc., and mounted on a platform over which were erected splendid canopies of red, white and blue silk, profusely trimmed with flags, rosettes and all that sort of thing. Then came numerous carriages, finely decorated, followed by a grand car of States containing thirty six little girls, dressed in white, each with a wreath of flowers on her head, and a little American flag in her hand. The car itself, was a large boat appropriately painted and decorated, with a beautiful awning over it, and the name, Nevada, on the stern . This car was drawn by eight horses, as was also the one following it which contained thirty-six more, similarly attired and arranged little girls, representatives of our public school. As these cars passed along, all the little girls waved their flags and sang patriotic songs. More carriages, and delegations from different societies on foot followed, and to the rear of the procession was brought up by twenty-seven Piute warriors, mounted, and bearing their flag, which is simply the American ensign, with instead of the stars on the blue Union, two white arrows and a tomahawk. At their head rode their great war-chief Winnemucca, in his "peace" paint, that is to say all one side of him - the left side - was daubed in a lovely manner with red ochre from the top of his shaggy top-knot, down to the soles of his moccasins, making him look considerably more like the devil than he does naturally. His horse was adorned in the same way. The right hand side of this formidable chief being thus illustrated, with black paint, would indicate "war to the knife and knife to the hilt," sock the tomahawk into your skull, peel your head, and all that sort of thing, without judge or jury, or benefit of the clergy. In the procession were borne numerous flags and banners of great beauty, some of them costing as high as $500, being made of the heaviest silk, with gold bullion fringe and tassels, and the stars embroidered on the Union, in gold and silver thread. There were also several fine bands of music, performing the most soul-stirring national airs. Never till my dying day, shall I forget that procession as it passed down C street though the heart of the city, the band playing, and the military, fire department, and all, singing that glorious popular song of "marching through Georgia," in which they were joined by the dense crowd of spectators which lined the sidewalks and balconies on both sides of the street. It was a scene that one beholds rarely more than once in a life-time, and a feast to the soul of every true patriot. The procession marched to Maguire's Opera House, where the usual exercises of reading the Declamation, Poem, and Oration were held. In the evening there were fireworks, a grand ball, theatre, several eligible private fights, general knock-downs and other patriotic demonstrations, but I believe no one got badly hurt, except by bad whiskey, and on the whole, it was an excellent celebration.

Or "them damned niggers," or "the bloody niggers," which are the other names by which persons of African extraction are familiarly known by certain classes of our people who are so particularly sensitive in regard to the small amount of dignity they happen to possess that they have a holy horror of the contamination of the negro's company, and are always prating against “negro equality," unmindful of the fact that they will one day sing with them in heaven or roast with them in hell, all on the most familiar and sociable footing of perfect equality and intimate connection - the inevitable nigger, I say, was the innocent cause of a general disagreement of the programme in many places, especially in San Francisco, deterring many from turning out in procession who would otherwise have done so. In this city they were not invited to participate, therefore the question of dignity among the scrub-stock and snobs was not brought to the test, although they freely expressed the determination “not to turn out at all if the niggers did." But that sad calamity was averted, by the niggers remaining in their natural obscurity and allowing the Indians to take their places, at which no offence was taken. In San Francisco, however, the dark-skinned, ivory-toothed, wooly headed sons of Cain were impudent enough to ask the privilege of walking in the same procession with white men. Not in front, as on the battle fields of the South, but at the extreme rear, where in the dust raised by their white predecessors, their obnoxious color might be hidden or obscured so as not to be so aggravatingly prominent to the sensitive dignity of the krout-eating, bog-trotting, hash-slinging, German, Irish, French, and English plunkeys in the procession, who, never being allowed any dignity on the other side of the water, put on the greatest airs and scollops when they become “Americans,” and in fact assume at times to dictate to the free American people as to how they shall act. Side by side the white man and the negro fought, bled, and died on the battle fields of the south, and now that the war is over, and the great day of jubilee has come, the black man begged the privilege of rejoicing with his white brethren, not as an equal, but simply as a servile descendant of a race of slaves. They did not ask to march in front, with bright muskets and blue uniform, reminding people of the fact that their race had borne those muskets, and worn those uniforms on the battle field, and without disgrace too. They simply asked the blessed privilege of bringing of the rear of the procession. Well, this was accorded to them, and what a hub bub it created. The result was two processions; one composed of the chief military officers of the country, city officers, two or three fire companies, and societies and associations of men of weight and responsibility in society, with the horrible niggers in all their blackness marching in the rear, with heads uncovered, and grinning one broad universal grin, the happiest, proudest set of poor devils in the whole wide world, while those composing the other procession were principally firemen an those whose small stock of dignity would not allow of a wasteful extravagance of the article such as would be incurred in walking with the niggers, like Gen. McDowell and the other big officers and city dignitaries. Pshaw! Out upon such clod-hopping, krout-eating, hash-slinging flunky dignity.

When the news of Lee’s surrender arrived, this whole excitable city went as “mad as a March hare.” All the bells were rung for six hours, and guns and everything that could make a noise were brought into requisition, old men danced like children, and waved their hats and hurrahed till their old throats were hoarse. Everybody went wild drunk with joy, for well they knew the war was now ended, and the long prayed for peace had come at last.

Only a week later, and all the flags were draped in crape, at half-mast, one building after another was hung with the symbols of grief and the whole city was in mourning. Men stood in knots about the corners and along the sidewalks, conversing in low but eager and excited tones that boded no good to traitors, or those who approved the foul deed of the black-hearted assassin. Every saloon and place of business was closed, and no man seemed to know what to do or how to act, but the deep under current of determination was apparent, and woe be to the traitor that should dare raise a voice of rejoicing over the hellish deed. The old men now were the most excitable, and with bared heads, and tears in their eyes, they cursed the hand that had stricken down the Savior of his country - Abraham Lincoln. Yes, men walked the streets with weapons of death in their hands, seeking but for a reason to use them, and the military companies assembled at their armories. Well was it that secessionists and traitors "haunted their holes" that day. Well was it that their mouths were dumb, for had a collision once taken place in Virginia, it would have ended in a fearful fight of extermination. At Gold Hill, one fool of a fellow did dare to express a word or too of rejoicing at the assassination. All that saved him from immediate death was the thick stone walls of the jail, which however was soon broken into and the trembling wretch dragged forth by the infuriated populace, who would have hung him at once, but wiser counsels prevailed, and he was tied to a stake and soundly flogged. He will bear the scars to his grave. A placard was then fastened to his back, labeled "A traitor to his county," and he was being marched to this city in the midst of the mob compelled to carry the American flag at half­mast, when he was rescued by the Provost Guard, who took him at once to their head­quarters. Heaven help him if he had ever reached here, he would have immediately adorned a lamp post. He was taken to Fort Churchill where with some half a dozen others who had dared to "shoot off their mouths" in other parts of the country, he was compelled to do hard labor in all manner of menial services for several weeks, and at length released on taking the oath of allegiance. "Thus ever with traitors." All is quiet enough now, even secessionists are glad the war is over, and copper­heads are all the soundest kind of Union men. Hang Jeff Davis by all means; he has got precious few to mourn for him in Nevada. That last money stealing, petticoat operation of his, lets him out, even with most of those who were his friends.

The Indians of the Plains, and along the Humboldt, have been rather troublesome for some time past, but they have been pretty much whipped into submission. A bit of a war is now apparently about to be inaugurated between the Piutes and the Washoes, from two of the former being killed near that city last week by some of the Washoes. The Piutes swear vengeance and are mustering in their armies, and sending all their women and children to Fort Churchill, out of the way. Meanwhile the whites look on like the woman whose husband was fighting the bear, and like her "don't care which whips.” No more now. 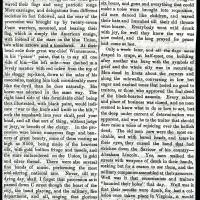