Since the date of my last letter, times here in California have continued to become more and more “stirring;” in fact the public mind seems to have been worked up to a sort of chronic fever heat, and in nervous expectation each moment of something new, exciting and strange about to "turn up.” The important capture of the rebel privateer schooner "chapman," which was seized in San Francisco harbor a few days ago, by the U.S. Marines, just as she was about to leave, with men, armament and munitions of war concealed on board together with certain overt acts and demonstrations of the "secesh" in various parts of the State, have put the trusty guardians of the Union even more on the alert. Every vessel that now leaves or arrives, is subjected to strict surveillance, and all suspicious movements on the part of secessionists or rebel sympathizers are carefully noted.

The secessionists in this State are known to be pretty well organized, and for a long time to have had in view a concerted plan for the overthrow of the U.S. authority here, and the placing of this State either under the rule of the Southern Confederacy, or in the event of a dismemberment of the Federal Union, of even forming a "Pacific Republic," with the addition of Oregon, Washington Territory, Lower California, Sonora, Arizona, and such other desirable territory as they might deem it advisable to “admit.”

Now the idea of a separation, as far as the two sides of the continent are concerned, is certainly a much more rational one than that of the separation of the North from the South, for, while it is difficult to draw the line of division between those two sections, we of the Pacific are already naturally separated from the other States by lofty mountain ranges, broad rivers and deserts. In fact until the telegraph was established, we were virtually disconnected.

Before California was admitted into the Union, we all used to speak as we do even now, of the "news from the States," and of "going home to the States," as though we were far away out of the Union, and then the "news from the States," - a month old - coming to us by way of foreign countries, as did also most of the emigration, only tended to realize to us how far we were from "home;" but gradually, by means of overland expresses, and lastly, by the telegraph, we are placed in direct communion with our friends of "the other side," the magic wire literally connecting us with the rest of the public. And when the great Pacific Railroad, passing through our own broad territory shall bind the two sides together with its iron bonds, and the thundering tramp of the iron horse shall have annihilated both time and space, then shall we begin to feel that we are fully of the Union and under the sheltering wing of the glorious Republic of the Starry Banner.

But all these pretty little schemes of the secesh traitors cannot win; it would be highly desirable to them, no doubt, to steal us from the Union, but, "that little thing can't be did." The “secesh” are numerous enough here, but true loyal hearts are still more numerous and able to keep all traitors in a proper state of subjection, let them plot and scheme as they will. They had it all fixed up to capture this State on Friday the 3d inst., but the capture of that schooner upset the whole arrangement. They would have seized the Navy Yard, forts, armories, &c., - if they could - but at all these desirable places everything was put in order for their reception and will be kept so in the future, as the Navy Yard is now placed on a "war footing" as well as all the forts, &c. The officers and crew of the rebel pirate Chapman, are confined at Fort Alcatraz.

Warren P. Miller, of Marysville, has obtained a patent for a new style of gunboat. The chief feature of the invention consists in the gun or guns, being mounted on a turn-table, which, when not in action, is intended to remain in the hold. This platform, or turntable, when used, is raised by steam power to a level with the upper deck, and the gun, or guns, being fired in the desired direction, it descends again to be reloaded, during which time a heavy iron shield covers the hole and renders the deck perfect. The only person required to be on deck is the gunner, who is safely ensconced in a small iron turret at the rear of the gun on the turn-table.

Nearly $800,000 of the treasure lost by the wreck of the Golden Gate, on the 28th of last July, has been recovered up to the present time, by the expedition which was fitted out for the purpose.

The mining furor which has pervaded the public mind so much of late, is still on the increase, as rich and more extensive discoveries are being made. An immense rush is now being made for Washoe and other parts of Nevada Territory. Four stages leave this side of the mountains daily, jammed full, and so great is the rush that passengers are obliged to book their names for seats four days in advance. A friend of mine just from there the other day, says he counted over three hundred "foot passengers," on the road between Carson City and Placerville.

The old claims in Washoe, too, are turning out richer than ever, and enormous "dividends" are paid by very many of the companies. In the "Gould & Curry" claim, on the Comstock lead, week before last, they took out half ton of pure native silver. It takes a big pile of money to buy a foot in such a claim as that. It is these big yields and “dividends” that incite people to go and try their luck at it. Joint stock companies are still incorporating at the rate of six to ten a day, in San Francisco, for the, purpose of working the mines in different parts of the country. If only one half of them ever pay any sort of a "dividend," it will certainly be doing well. One good thing results from it, that's certain; all their documents, certificates of stock, transfers, &c., have to be "stampted," so that Uncle Sam is the gainer by the operation, at any rate. It appears to me that the "stamp" revenue derived from California must certainly be greater than from any other State in the Union.

Spiritualism, too, seems to be on the increase here, for I understand that "spiritual circles" are again in fashion in San Francisco and elsewhere, and hundreds of people nightly spend their time experimenting with the "odic forces." Well, "every one to their taste," as the old woman said when she kissed the cow. If they find pleasure in distorting their diseased imaginations into the belief that the ghostly thumpings they listen to are real palpable messages from the world of spirits, all right. If they wish to unveil the mysteries beyond the tomb, if they wish to raise the spirit of old Mather Byles, or even raise the Devil, why, let them just "bile in." Perhaps it’s all a humbug; if so, “viva la humbug;" everybody now-a-days takes a lively pleasure in being humbugged.

But joking aside; what are the good results of Spiritualism? Our lunatic asylums do not speak well for it. Investigation may lead to future good, and the darkness of the present may yet be changed to light. It is certainly a subject of very much interest to me, as I have ever seen anything of this strange doctrine; not a "manifestation," "nary rap." The people of this State have generally been too practical in their ideas to find time for the investigation of such theories, and we have never had any prominent expounders of the doctrine among us, except poor Crane, and they hung him up at Auburn several years ago.

The resident physician of the Insane Asylum at Stockton, a few days ago, had one of the patients of the Institution employed in his garden trimming some trees, when a man on horseback passing by, hailed the insane man with - "Hello there! what are you doing?" He immediately replied with “Hello there! where are you goin’?" "Ah," said the horseman, "but that's not answering my question.” “Well, now, look here, you thunderin’ old fool," said the crazy fellow, "you've got the advantage of me; you can see mighty plain what I am doin', but d---n me if I can see where you're goin'.” There is some sense in such madness as that, and such insanity is certainly worth repairing.

New potatoes are now plenty in the markets, green peas, radishes, lettuce, &c., have been in market for several weeks, and in Stockton they had a shower of frogs the other day, real live little green fellows, that went hopping about the streets as lively as crickets. But 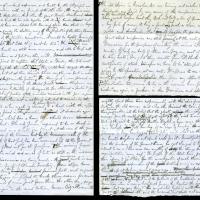