Harvest is again with us, and the agricultural portion of the community, as usual at this season, finds plenty to do. Wages for harvest hands are from two to three dollars per day, and in fact there is more work to do than there is hands to do it, so many are off to the wars, or gone to the new mines of the far North. Of these last however, large numbers are returning now, heartily sick of their journey, and glad enough to get back to our hospitable shores once more.

Ahl you should hear the doleful stories some of them tell, of the hardships and sufferings they encountered in their long and perilous trip by sea, river and land, to the cold, rough, and unfriendly regions of "Salmon" and “Cariboo," where the gold should have been as they expected to find it, but didn't - in great profusion. Some of them say there are a few claims there that are very rich, but they were taken up long ago, and all the country outside of just those few claims isn't worth staying in, to say nothing of mining it. Others say there is “a little" gold there "in spots," but not enough to pay anybody for digging for it. Others again pronounce the whole thing an unmitigated humbug, got up by the steamship companies, and others interested, just to swindle, rob and cheat a too confiding public.

And then you should hear them tell about the snow, ice, and cold water they met with, frozen toes, scarcity of grub, cross Indians, and all that sort of thing. I'm glad we didn't go. One thing we may depend upon, those who were victimized on this occasion, feel that they have learned wisdom from experience, and will not be humbugged again very soon; at least not until some other gold excitement of the same kind is gotten up, when they will again go into it with the same rush as before. "Sic transit gloria mundi." One philosopher however, assures me that he "only went up there because the rest did - wanted to see the country - didn't expect to find anything there," and winds up by saying - "Blessed are they who don't expect anything, for they shan't be disappointed.”

Notwithstanding the difficulties we labored under this last winter putting in our crops, the harvest is very abundant, and we have plenty to spare. I think as much, or nearly as much wheat was raised this year, as in any year previous, and the prices therefore rule low. Fruit is also plenty and cheap.

Although so far removed from the scenes of war, bloodshed, and devastation consequent upon the present rebellion, yet we cannot but feel the consequences of it. Many a familiar face has disappeared from among us, "gone to the wars," and the enhanced prices of the various articles of domestic necessity, together with the increased rates of taxation, tell strongly upon the resources of us all. But where is the true loyal patriot who will not cheerfully stand five times the draught upon his resources, aye, give his last dollar, if necessary, towards the support of such a government as ours. If he isn't able to fight, himself, let him help support those who will fight for him.

Of course much complaint is made in certain quarters, at the "oppressive taxation," as they term it. I notice that those who have the least to pay, are about as loud in their outcries as any of us. There are many known secessionists here, as well as many of those who sympathize with the South, but yet don't dare to come out honestly and openly, and acknowledge themselves to be secessionists. And to those, of course, it is like drawing teeth, to be obliged to contribute to the support of a government they would like to see overthrown, and at one time some of them talked quite strongly of resisting the collection of their part of the taxes. I am inclined to think they would have had a jolly time of it. They are all pretty quiet now, and don't talk half so saucy as they did a year ago. They are liable to learn, sooner or later, that we have a government yet that is ready, willing, and able, to reduce all rebel traitors to a proper state of submission.

You probably have ere this, read the full account of the loss of the steamship Golden Gate, which left San Francisco for Panama on the 21st of July, with 242 passengers, and 96 crew, and was burned on the 27th, 15 miles Northwest of Manzanilla. Of the 338 souls on board, 198 are lost or missing. The fire broke out near the engines, while the passengers were at dinner, and so rapid was the progress of the flames, that but little could be done towards saving the ship.

She was headed at once for the shore, which was some three miles distant, and soon struck, - but by this time the entire ship was enveloped in flames, and all who were not in the boats, had to take to the water. Many succeeded in reaching the shore, but many more were drowned in the heavy surf, or perished near the ship.

The helmsman heroically stood at his post, until the scorching flames completely encircled him, then lashed the wheel and sprang through the fire into the ocean. He was saved.

There was no such thing as remaining by the ship. The rushing flames bounded fiercely fore and aft, and unrelentingly hurried every living soul over into the sea. In the opinion of some of the passengers, thirty minutes could not have elapsed from the time the alarm was first given until the ship was entirely abandoned. She struck some two or three hundred yards from the shore.

The next day after the disaster, the steamship St. Louis, from Panama, arrived, and took on board all who were on the shore, or who had reached Manzanilla, and brought them up to San Francisco. Several very young children were saved; one, a sweet little babe of about two months was washed ashore, its parents being drowned. Three children by the name of Manchester, the eldest eight and the youngest three years of age, were also saved.

The treasure, amounting to about a million and a half, of course still remains with the wreck. An expedition has already left San Francisco to attempt the recovery of it.

This makes the seventh steamship that has been lost on this route within the last twelve years. The North America was lost on the 27th of February, 1852, forty miles south of Acapulcy; passengers and crew all saved. - The Independence was burned at Margarita Island, Lower California, the 16th of February, 1853. Nearly 200 persons lost their lives. - The S.S. Lewis was wrecked at Bolinas Bay, some fifteen miles north of San Francisco, on the 9th of April, 1853, no lives being lost. - The Tennessee was wrecked at the entrance of the bay of San Francisco on the 6th of March, 1854, but all on board were saved. The Winfield Scott was wrecked off Santa Barbara, Dec. 2nd, 1853. No lives were lost. But with the Yankee Blade, off the same coast, Oct. 1st, 1854, 415 souls went down.

The Golden Gate was built in 1851, and has been considered to be one of the best boats on the route. The origin and cause of the fire is not precisely known, and no blame as yet seems to be attached to any one, but the fire seems to have been one of those accidents that foresight could not well guard against.

Us Californians feel much rejoiced to see that at best we are to have what we have so long desired, the great Pacific Railroad. It certainly cannot but be of the most inestimable benefit to our whole country, opening out as it will, the partially developed rich resources of the vast interior, and establishing a mode of communication between the two sides of our continent, the want of which has been, and is, seriously felt. The railroad, although much faster, may not be a much safer mode of transit than the steamship line, but then many people prefer having their necks satisfactorily broken on land, to being burnt, scalded, or drowned, by the ocean route.

But our country is progressing, rebellions and wars notwithstanding. Old fogies are dying out, and youthful embodiments of progress are filling their places. The world rolls forward, not backward. The progressive representatives of the age are being “married and given in marriage," and in this connection I wish to inform you that I was “taken down” several pegs one day last week, by a visit from our mutual friend Fred. W. Lucas, Esq., one whom I have ever been proud to own as a friend, and fellow Plymothean, and what do you think? -by his side in the buggy he had a nice young lady, whom he introduced to me as Mrs. Lucas. A fine, bright-eyed importation just arrived direct from old Plymouth. - They only stopped a few minutes. They were en route for Lucas' ranch on the Salinas, some fifty miles from here. To say he took me by surprise, would only convey a faint idea of the disturbance of my usual equanimity.

This is the result of confidential correspondence and secret conspiracy between Lucas and parties interested at home. Oh, so sly was he, and so quietly did he consummate the whole plot, that his most intimate friends here didn't know a thing about it till it was too late to argue the case with him.

Well, after all perhaps it wasn't quite so bad a move on his part when one comes to be reconciled to it. Good, smart, desirable girls are not as plenty as black berries here. It was a good idea after all. All happiness to them. I like it. It set me to thinking. But – 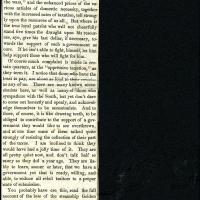