I have deferred writing to you for some time past, owing to the long continuation of the storms and floods which have been so heavily visited upon Uncle Sam's Pacific possessions, rendering traveling an arduous undertaking, and mail facilities extremely dubious and unreliable. And then again, my last letter to you, although it was written in due season, I find never reached you, for the very good reason that it was not mailed at all. A friend of mine, who was going to Washoe, kindly volunteered to mail the letter for me, at San Francisco; but he unfortunately forgot all about it until a few days ago, when he returned. He found the letter among his baggage, where he had mislaid it, and it had remained safely stowed away ever since. He thought it might be getting stale, so he returned it to me.

This winter thus far has been the most severe that has yet been experienced, since the first settlement of the country. The "oldest inhabitant" never saw the like. It has indeed been - the “rainy season," for up to the present time, it has been rain, rain, with but little intermission, thicker and faster, and more and more of it. The first rain of the season fell on the 10th of November, but it did not get in a good deluging way until December, when all the little streams and creeks became swollen, and on the 9th of that month, commenced the first of a series of appallingly extensive floods. The big rivers ran over their banks, and overflowed the level plains, carrying ruin, death, and destruction everywhere.

The far-famed, but ill-fated city of Sacramento has suffered terribly. After the inundations of the memorable winter of '52-3, a high levee or embankment was built around the city, in order to protect it from all future floods, it answered very well for such fine winters as we have had since then, but this winter it could not fence out the big waters. - The raging floods of the American, and Sacramento, attacked the devoted city, both in the rear and in the front. Over the levee came the leaping waters, scornfully laughing at the puny obstructions that the presumptuous hand of man had placed in its way. The alarm bells sounded, and people rushed hither and thither to save what they could or to note the progress of the danger.

Along the level streets, and over the sidewalks, rushed the gliding demon of destruction, submerging street after street, until at last it had complete possession of the doomed city. Still and steadily rose the water over the curbstones, over the door steps, and into houses, stores, and hotels it rushed. Everybody was busy putting things up out of the way of the water. The pianos and sofas were set up on the chairs and tables, and all the light moveables were taken up stairs or put on high shelves. It rose at the rate of an inch in five minutes, and stood at the depth of rom two to six and seven feet on the lower floors. Many small wooden buildings floated off down stream, and some of the walls of the brick buildings, becoming gradually undermined by the action of the current, settled and fell. - Boats were out everywhere, rescuing those who were in danger.

At length the abating storm allowed the waters gradually to recede. Street after street reappeared and the luckless inhabitants began to please themselves up with the idea that the flood was over with, and all there was to do was to repair damages, and fix the levee so as to prevent any more floods from gaining admittance. But these comforting reflections were of short duration, for before the waters had entirely left the city, heavy rains sent a still heavier flood in upon them, which was quickly followed by another and still another. Week after week passed, and the repeatedly and continually submerged city presented scenes of distress, misery, and ruin, hard to realize.

Hundreds of families lost all they possessed in the world, and were thrown upon the charities of their fellow citizens, or crowded the steamers for San Francisco.

Many took refuge in the large building called the Pavilion, where they were fed and provided for by the Committees of Relief and Safety, Most of those who had taken refuge in the upper stories of their houses, were not prepared to stand such a long siege, and had to be removed, or relieved, by means of the boats which were plying to and fro through the streets for that purpose. Many were actually starving. Cooked food became a rarity; for the stoves and cooking-ranges were mostly under water.

The steamers to San Francisco come crowded with the unfortunates, who were given a free passage from their last homes, to where they could be fed and properly cared for by a generous and sympathizing public. Thousands upon thousands of dollars were at once subscribed and collected, and donations of provisions, clothing, blankets, and especially cooked food, promptly dispatched by steamer loads each day, to the relief of the suffering Sacramentans. In San Francisco, Platt’s Music Hall was, as well as other places, thrown open to receive the homeless sufferers, and thousands partook of its hospitalities.

Sacramento has been the Capital of this state for the last six of eight years, and you may be sure our legislators did not have a very jolly time of it during the flood, paddling about in all sorts of boats, to and from the waterlogged State House. They stood it quite patiently for a while, but at length came to the very sensible conclusion that it was best to adjourn to dry land; so therefore, now both houses meet, and are in session in San Francisco. The Capital will doubtless be removed after this, and be located in some more desirable locality­ San Jose, Oakland, probably.

Great destruction was also caused by the floods at Marysville and other places on the Sacramento and American. Mills, dams, bridges &c. were swept away by the mighty force of the resistless current, and many lives were lost. The whole of the immense plains of the Valley presented to view one vast sheet of water. The ranches were all overflowed, and an immense loss of cattle, horses, sheep, and other live stock, was the consequence. It is calculated that over forty thousand head of cattle have perished thus far. The steamers from Sacramento brought down many hundred head of horses and cattle to San Francisco, and from the ranches on each side of the river the distressed farmers were taken from their houses, on board the steamer. Small relief boats also scoured the plains far and near in every direction, loaded with provisions for the relief or rescue of all who stood in need.

Stockton was also flooded, but suffered very little, compared with Sacramento. All throughout the mining region, the floods of the various rivers were beyond all precedent, and the loss of property in the way of mills, bridges, dams, flumes, and all sorts of mining arrangements, was immense. Many lives were also lost, and most all of the little towns along the rivers were swept away entirely. At Los Angelos much damage was done to the vineyards and orchards by the floods, and the loss of property throughout the state is estimated thus far, to be considerably over fifty millions of dollars.

Large quantities of provisions were destroyed in the mines, so that now, owing to the almost utter impossibility of transportation there, the necessaries of life are scarce and dear. In fact, within the last three or four weeks, provisions in San Francisco have advanced most materially in price. Flour is now ten dollars a barrel, potatoes three and four cents a pound, and all other things in proportion. As regards suffering, distress, hardship, and loss of property and life, this winter far exceeds the memorable winters of '49 and '52. As a matter of course, a much larger amount of snow has fallen in the Sierra Nevada than has been before known of, which will give a chance for some heavy spring freshets.

On the other side of the Sierra, also, in the Carson Valley, Meono, Esmeralda, and. Washoe counties, the damage has been very great indeed, especially at Washoe. A great many of the mining mills there have been swept away, and several lives lost. In the past week the weather has been tolerably good; the floods have subsided, and Sacramento is now probably nearly free from the water, again. What sort of weather is yet in store for us, of course remains to be seen.

Thus far, the farming community have had a hard time of it, as well as the rest of the population. Very little plowing has been done, and what was done in the first part of the winter, has become so packed and washed by the heavy rains, that it will have to be done over again. So the prospect is that we shall have but a small crop put in this year, as there is but a very short time left to do it in. God save us from such another winter as this has been thus far.

This next spring and summer there will be a great rush made for the new gold mines of the Nez Perces and the Salmon, in Oregon, and the Cariboo, in the British possessions. - There mines were discovered last fall, and are said to be fabulously rich. There is much excitement about them, and next summer, when they can be worked, you will hear wonders from them, in the way of large fortunes, huge lumps, and big strikes, - probably. 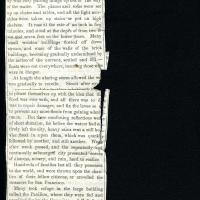