At the present writing, great excitement exists in regard to the late and important news of the Indian massacres in Carson Valley. The new mining region has suddenly become the theatre of wholesale butchery. The blood of friends and fellow citizens cries for vengeance. The Indian warriors are out upon the war-path, and the fresh blood upon their scalping knives is the blood of the white man. The call is "to arms!" The country is aroused, and troops are hurrying across the Sierra, to the scene of action.

These hostilities commenced by an attack of the Indians on Miller's Station, at the Big Bend of Carson River, on the night of the 7th inst., in which four white men were massacred. As soon as practicable, a company of about a hundred men, under the command of Maj. Ormsby, from Carson City, Virginia, and other points, started in pursuit of the murderers.

On the afternoon of the 12th, when near Pyramid Lake, they fell into an ambush of the Indians, who were judged to be some two thousand strong. The fight against such odds was of course not of long duration, and the whites were obliged to retreat, and escape the best way they could, leaving Maj. Ormsby and many others, dead upon the field. How many were killed is not precisely known yet, but it is supposed about twenty-five. A prospecting party of seven men were all found murdered at the crossing of Truckee River.

The telegraph from Carson City at once flashed the news across the Sierra to California, calling earnestly for arms and ammunition, of which there was a scarcity. The Mayor of Sacramento immediately called a meeting of the citizens, and, thoroughly aroused to a sense of the danger which menaced their friends in Carson Valley, prompt measures were taken, and plenty of arms, ammunition, and assistance, were quickly on their way thither.

In San Francisco the receipt of the news caused a more intense excitement than has been felt for a long time. The fact that two thousand savages were devastating a region where are so many of our friends and kindred, and slaying all who fall within their power, was enough to profoundly stir the hearts of the whole community.

Governor Downey immediately issued a requisition to Maj. Gen Clarke, commanding Pacific Division U.S. Army to furnish all troops, arms, &c. that were deemed necessary. In answer to this requisition, Gen. Clarke ordered out Capt. Stewart's Third Artillery company from Alcatraz Island, of eighty men, and Capt. Flint's Sixth Infantry, from Benecia, of seventy men, who took passage in the steamer Eclipse Thursday afternoon, en route for the seat of war. He also sent along two mountain howitzers, with ten men from the Third Artillery at the Presidio, to take charge of them. Also 500 stand of arms and 100,000 rounds of ammunition. The Secretary of State sent 200 stand of arms, with ammunition &c. from Sacramento. Adjutant General Haven commands the forces.

The Nevada Rifles were ordered to proceed at once from Nevada to the scene of action, and they are most probably there by this time. The military companies of Sacramento, Marysville, and Coloma, are also under orders to hold themselves in readiness, in case they should be required by the Governor. A committee of fifteen citizens from Sacramento have gone to the relief of their friends, escorting 200 Minie rifles and 5,000 rounds of ammunition.

No more troops will probably be required to be sent, as there are plenty of men in the new mining region who will not object to being on U.S. pay and rations for a while; and the people there did not ask for troops, but only for arms and ammunition to fight with.

What considerably embitters this excitement is the fact that the Mormons are reported to be leagued with, and assisting the Indians, and were seen with them in the battle with Maj. Ormsby's party. One thing is certain; if the Indians happen to want anything, they can now have it. - They must pay dearly for the blood they have shed. The general feeling towards them is that they should be utterly exterminated, and if the Mormons are having a hand in this bloody game, their nest at Salt Lake should be at once broken up, and the old arch traitor Brigham Young and his chief confederates, served as the Virginians served old John Brown. There are plenty here in California who would be only too glad to have permission to go and break up that corrupted nest of rascality, and charge nothing for the job.

Col. F. W. Lander and party, comprising the U.S. wagon road Expedition, arrived in the last steamer, and leave soon for the field of their labors. His instructions are, to complete the survey of the route on which he has been at work during the last two years, to make an accurate map of the same, to improve the road from the great bend of the Humboldt to the State line of California, so as to make it easy for emigrants' wagons, and to build earthen water-tanks at suitable places in the desert region between the Humboldt and the foot hills of the Sierra Nevada.

Col. Lander's party numbers some forty or fifty men, and as they are going directly into the country of the hostile savages, they are going perfectly prepared with arms of the most effective description.

But amid all this excitement, politics is not lost sight of. Since the Pony Express brought the news of the failure of the Charleston Convention to nominate a candidate for the Presidency, Republican stock has risen high in the market. They think they are now sure to carry California this fall, and that a Republican President will be inaugurated on the 4th of March next. And excuse me for saying I think so too.

The Rev. Thomas Starr King, although so recently arrived here, is very popular in San Francisco, and people flock by thousands to hear him preach on Sundays. He also lectures to crowded houses evenings during the week.

Miss Jane M. Davenport, the distinguished tragedienne, arrived in the last steamer. She was here a few years ago, and established the reputation among us that she everywhere enjoys, as an artiste of the highest order of excellence. She will soon appear at Maguire's Opera House, and will inaugurate a higher order of the drama than has been presented to the theatre going public for some time past.

A few weeks ago, as you probably saw by the papers, the Japanese Embassy paid us a visit, and gave us a chance to display our obsequious hospitality. They were well entertained, fed on wine, and cheese, and all sorts of good things, well seasoned with flattery, speeches, toasts, &c., and the mercenary hand of friendship, commercially extended to them. We natter ourselves that we made an excellent impression, and of course expect to realize numerous dollars from our future trade with the rich and extensive nation they represent. And now that these Celestial Ambassadors are among you of the Atlantic, if you only treat them as well, in proportion, as we did, they must certainly return to the "Flowery Empire," well impressed and pleased with their jolly good neighbor Uncle Sam. 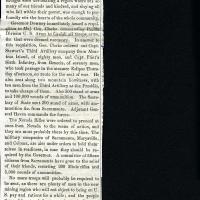