Since my last, much has transpired to interest the California public, and keep our minds in an unusual state of ferment.

Horace Greeley has been here, taken a hurried, though perhaps sufficient view of us, spoken to us on various occasions, and gone home to New York to report as well as his limited stay among us may have qualified him. Of course, while here, he was lionized and made much of, as "one of the most extraordinary men of the age." Everybody saw him that could. He was the great literary "elephant" that it was highly essential to go and "see." Therefore he always addressed immense and admiring crowds.

Bayard Taylor too, has paid us a visit, but has been rather lost sight of, in the excitement of the State election. He also is an "elephant," every one feels anxious to get a peep at the noted traveler, of whom we have read so much.

Our State election came off on the 7th inst. It passed very quietly and satisfactorily throughout the State. Democratic, Republican, Lecompton and Settler were the four different tickets. All the returns are not in yet from the most remote portions of the State, but it has undoubtedly gone largely Democratic. The Settlers ran a pretty strong ticket, nominated from the other tickets, but carried but few points. Milton S. Latham, will most probably be our next Governor.

But the great event of the day, is the duel which came off on Tuesday last - the 13th inst., between Hon. David C. Broderick, U. S. Senator, and Hon. D. S. Terry, Chief Justice of the Superior Court. They fought at Davis' ranch, in San Mateo County, some twenty miles from San Francisco. The distance was ten paces, and the weapons duelling pistols. At the first fire, Broderick fell mortally wounded. "The ball entered his right breast between the second and third ribs; passed under the sternum, fracturing the edge of it; passed over the heart, through the upper lobe of the left lung, and fracturing the fifth rib. The ball then took an upward direction through the left arm pit, and lodged in the back muscle of the left arm." He died Friday morning at 9 1-2 o'clock.

This sad affair has cast a gloom over the State, any many murmur the loss of Broderick. As a public man, he had of course his enemies, but with the masses of the people he was a general and very popular favorite. Judge Terry, it will be recollected, was once in the hands of the San Francisco Vigilance Committee for stabbing S. A. Hopkins in the street. He came very near getting served as Casey and Cora were at that time, and as the sequel has proved, they did very wrong in not suspending him also. A most righteous Judge indeed to adorn a Supreme Bench.

Severe talk, politically, led to this fatal duel, or rather it should be called murder, for it was in reality no less. Terry was an expert and well practiced shot, as good, if not the best in the State, while Broderick was an awkward and entirely unpracticed one; so that his pistol exploded before the word was given, and while raising it to fire. The ball struck the ground a few feet in front of Terry, thus leaving him entirely at Terry’s mercy. But Terry very deliberately drew a bead upon Broderick's heart and fired. The papers to-day and yesterday are all dressed in mourning, and are loud in condemnation of Judge Terry.

Measures are being taken to arrest Terry and the public demand that full justice should be dealt out to him. But still it is to be feared that he will be passed over lightly, with a sort of form of a trial just to wool the eyes of the people. I honestly wish, as do thousands of others, that the Vigilance Committee had his case once more in hand. Judge Terry's punishment could be calculated upon to a moral certainty. His career thus far in this State has been one little calculated to win for him anything but the execrations of the public, while that of Broderick has been one of marked brilliancy and success, winning for him the esteem and love of all honest men.

He has left more and stronger friends in California than any other man ever had; he has also left more malignant and relentless enemies. He was a great and talented man, and has fallen in the great battle against slavery extension. His own words when brought in from the field, and suffering already under the pangs of death were - "They have killed me because r was opposed to the extension of slavery and a corrupt Administration." His last words were, "I die - protect my honor."

His funeral takes place to-day, at 1 1-2 o'clock P. M., from the Union Hotel. All the civic societies and Associations in the city will attend the funeral in citizens dress, and without music. The military all voluntered to do escort duty, but their services were respectfully declined by the Committee of Arrangements. Solemn High Mass takes place during the morning at St. Mary's Cathedral, and Col. E. D. Baker will deliver a funeral oration on the Plaza. But 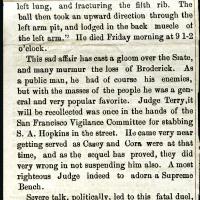