DEAR ROCK: - Perhaps you thought from my long silence, that your old correspondent had quite forgotten you; but let me assure you, such is not the case. As excuse for not having written you for the last few weeks, I must plead hard work, busy times harvesting, no opportunity &c., and promise to do better in future.

Throughout the valley part at the present time, everybody is very busy indeed, and on all the surrounding ranches, the ripe, golden grain may be seen, in process of being harvested. No one has an excuse now for being idle, for there is plenty of work, and wages are two dollars per day, and boarded. The grain crop this year is very heavy, and we shall have a large surplus for exportation; nearly twice as much wheat having been raised this year, as in any previous season. Passing through Alameda County, two or three weeks since, I saw near San Leandro several thousand acres of grain all in one vast level body, spread out for miles, and miles along on each side of the road, with long lines of fences running through it, marking out each ones' possessions. Alameda County is the best portion of the State for grain growing.

The grain is always cut by machines - hand sickles, and cradles, being wholly unknown, or cast aside. These machines are of various patterns and patents, and are generally drawn by four horses. They go round and round a field of grain, mowing a swarth of from five to seven feet wide, cutting at the rate of about fifteen acres per day, and leaving the grain in small bunches all over the field. This is then taken in wagons and put into stack, or taken direct to the threshing machine; or if the straw is long enough, eight or ten men bind it up as fast as the reaper cuts it.

But even these reaping machines, although a great saving of labor and expense, are now in a great measure superceded and thrown into the shade by a better invention, called the "clipper" or "header," which has come into general use this season. This machine is likewise propelled by four horses, and cuts a swarth of ten feet and more in width, and will cut twenty five acres per day. It does not however, like the reaper, cut near the ground, but merely cuts off the heads of the grain, and a broad canvas belt, running part back of the knives, carries the heads of grain obliquely up a wide spout, which projects over the side, and deposits the grain into a big box on wheels, drawn by a span of horses, and driven along by the side of the machine. When the box is full, it is driven off, and another takes its place. Each clipper has three of these boxes, and they haul the grain into stack, or direct to the threshing machine, which is rather the quickest, cheapest, and best way, the thresher being placed in the middle of the field for the purpose.

When these two machines work together, they employ some twelve or fourteen men, and and from twenty-two to twenty-five horses. It is really a fine stirring sight, to see so many horses and men in the field, all in motion, and doing up work so expeditiously. A hundred acres of grain is thus cut, threshed, and sacked up ready for market in four days. l wrote you about this time last year, of still another machine, called "harvester," which cuts, threshes, and sacks up the grain, all at one operation; leaving the grain in sacks all over the field. But they have not yet got that machine to working perfectly.

Now is the "dry season" with us. No rain has fallen since last spring; consequently, California has had to ''dry up." No green blade of grass is found on the parched hill sides, but yet the dry grass is as good as hay for cattle, and will be so until the first rains in the fall, which soon takes the nourishment out of it.

Speaking of this dry grass as feed for cattle, reminds me of a droll joke I heard the other day. An outrageous wag of my acquaintance edifying a friend of his who had just arrived here from the "States," in regard to the manners and customs peculiar to California, and to the many curious questions that his friend asked him, he made some rather curious replies. Among other questions was this: "How is it that the cattle all keep so fat when the feed on the hillside is dried up?" “O,” replied my friend, "as soon as the green grass is dried up, we just put a pair of green goggles on the eyes of each animal, which makes the dry feed appear green again; and in this way we find no difficulty in keeping them 'rolling fat' the year round." 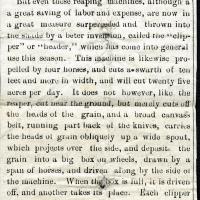