Just at the present time is the busiest part of the sowing season, and everybody is hard at work, early and late, plowing and "putting in" their crops. The season commenced with December, and many were sowing grain even before that; but with March the dry weather generally sets in, and grain sown then is rather late to produce a good crop, although it may in a favorable season do well. There will probably be more grain raised this year in California than ever before. Thus far the season has been favorable; the rains fell early, therefore plowing began early, and although the winter has been rather dry, yet during the past week copious rains have fallen every day and are still falling, giving the ground a better soaking than it had last winter. Everybody anticipates a most bountiful crop; may they not be disappointed.

I never saw what is termed a "volunteer" crop before I came to California, and perhaps you may not exactly understand what it is. As its name indicates, it is grain that grows voluntarily from seed that was scattered or wasted on the ground in the handling in harvest time. Thus, the same ground that I plow and sow this year will - seeded by the scatterings in harvest - produce a voluntary crop next year without giving me any more trouble than just to harvest it. Of course it will "volunteer" and keep on "volunteering" year after year; but after the first year, wild-oats, mustard, clover, and weeds get too much mixed in with it, and it pays best to plough and sow anew; although I helped to harvest a crop of barley, that was 'volunteered' the third time, and it yielded well; being the fourth crop from only one sowing. Such instances, however, are not very common.

"Volunteering," is not peculiar to grain crops alone, for almost all vegetable grow in the same way here. Corn, beans, peas, tomatoes, and in short all seeds that drop upon the dry parched ground in the autumn remain perfectly sound and good until the winter rains come when they all vegetate. All the vegetable roots, such as potatoes, beets, carrots, turnips, &c., are not killed by the winter, but on the contrary sprout out and grow again when winter comes. Cabbage, beets, cauliflower, &c., are green the whole gear round.

Some very encouraging news has lately arrived from Frazer river, and some of those who went there and returned so disheartened are sorry that they were so much in a hurry to get back to California. Some even talk of returning thither to brave the ice and snows of the frozen Frazer region; entirely oblivious to the trials of their former experience of that inhospitable country in the recollection of certain flats and ravines, where they found a little gold, which are now magnified in their minds into rich diggins.

"Sailor's ravine" is now expected to have turned out very rich indeed; therefore, all who held claims there, and left for California, are sorry they didn't stay and "prospect" them more thoroughly. But they “always knew the gold was there" though they "didn't think it so very rich.” However, they will probably be rather more cautious about swallowing the golden news so greedily as formerly.

The land titles in this State still continue unsettled and even more complicated and entangled than ever. Frequent disputes arise, occasioned by conflicting claims to pieces of lands, and sometimes fighting or bloodshed is the result. A quarrel recently occurred near Mountain View, in which Paul Shores was shot dead, and his brother James was seriously cut with a bowie knife so that he was not expected to survive. They were building a house on a piece of land claimed by them, but which was also claimed by Thomas Beals, when Beals came with Crosby and Robb - two friends of his - and attempted to drive them off. In the affray which ensued, Beals shot Paul Shores, and Robb stabbed James Shores. The two brothers were orderly, respectable men, and stood high in the estimation of all who knew them, and the news of the fatal tragedy caused an immediate excitement throughout the whole neighborhood. Beals fled for his life to San Jose, where he gave himself up to the city authorities, and was immediately put in jail. He was quickly followed by a large body of the excited people and the fleetness of his horse alone saved him, for had he been taken he would have been hung to a branch of the nearest tree, as sure as fate. The sheriff at once placed a strong guard about the jail, and the military were assembled at their armory, but no attempt was made to force the prison. Crosby and Robb were both arrested by deputy sheriff Miller, who happened to be in the neighborhood at the time, and the murderers remain at present safely stowed away in jail. But – 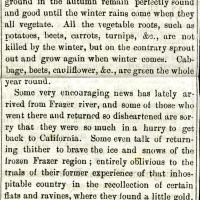