And once again, in accordance with the well-worn and time-honored custom at the commencement of each annual January, I am wishing you “a happy new year." I have often wondered how, or whence this custom first originated, or if it ever did originate or was always so. It is a custom that all youngsters, especially, fully believe in, and by them "new year's day" is considered an excellent institution as an annual source of revenue. Does Young America have any objections to "new year's presents"? None whatever.

On that memorable day he receives some of his earliest lessons in the art of acquiring coppers. To him those cabalistic words, "wish happy new year," are looked upon as merely a verbal draft on certain pockets that he knows of, for any amount of money, from a cent to a "fopunce," and the proprietors of those same pockets are generally "spotted out" for some days beforehand. He shrewdly feels it to be all important that no one should "wish" him first, therefore he keeps his young eye well "peeled," and on the lookout for those from whom he expects coppers. A cent is established fee, two cents is highly gratifying, and a half dime is a "rich strike." Don't anybody give him a "ninepunce?” that would be rather too much for his young nerves.

Don't you remember when you and I were little boys, how on the last evening of the year, we used to lay awake in bed reckoning up the amount of money that we expected to receive for “wishing” on the morrow. "Father would give us a cent," “so would mother;" certain others of the family were duly considered, and next thing how should we spend our money? Ah now, that was not the least important point. Figs or dates were an excellent investment, also peanuts; and amid the perplexities of the question as to whether we should buy a cents worth of candy and two cents' worth of raisins, or two cents' worth of candy and one cent's worth of raisins, or spend the whole for "liquorish ball," we fell asleep.

Since the great earthquake that l wrote of in my last letter, California has remained "in status quo," although many timid ones predict that this last shake up is but a gentle foretaste of what is to come. They look anxiously forward to a grand burst-up and convulsion of nature, which shall tumble the mountains over into the plains, and leave the valleys bottom side up, and the rivers all running the wrong way.

And as an argument in support of such an uncomfortable state of things, is the fact that by the recent earthquake several large fissures or cracks were opened in the low grounds about San Jose, and hot vapors issue from them. In one of them about a week ago, the thermometer, at the depth of four or five feet, rose to 125 degrees Farenheit, the temperature of the air at the time being but 65 degrees. These cracks are quite a curiosity, and are visited by hundreds of anxious individuals. However, the old saying of “as long as she cracks she holds," must apply here.

We are now in the height of the ploughing season, and on every ranch the plow is fast turning up the mellow soil preparatory to another crop of the golden grain. I think there will be more sown this season than ever before. Thousands of acres of grain are already green and growing, and with plenty of rain, all things bid fair for a bountiful crop. 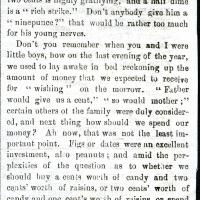