Since my last letter, things have wagged on about as usual, and with the exception of an unusual earthquake, nothing of much note has transpire. This notable convulsion of nature, came off on the night of the 25th ult., and although I have heretofore spoken of California earthquakes, as "no great shakes," yet I can assure you this was not to be sneezed at, by any means.

It was just twenty minutes of one o'clock, and being somewhat unwell, I was sitting by my bed-side reading, when suddenly I was started to my feet by a heavy, dead concussion, as though a very heavy body of some hundred tons weight had fallen near the house, which was instantly followed by a violent quick shaking. I could hardly keep my feet. The timbers squeaked, the roof cracked, the doors and windows rattled furiously, the crockery and bottles on the shelf came down with a smash, the top of the chimney came crashing down upon the roof, and with an anxious regard for his devoted cranium, your honored correspondent made excellent time out through the back door. The shock only lasted, I should judge, about half a minute, and then all was still again as before. Two or three light shocks have been felt since then, but nothing worth while.

This shock was much more severely felt here, and within a few miles around, than it was elsewhere. At Santa Clara but little damage was done. At San Jose, one corner of a large concrete building in course of erection, was thrown down, and an old adobe house was also prostrated. Some few chimneys suffered, and many of the brick buildings were more or less cracked. A few bottles and other breakables, were also let down from shelves in bar-rooms and stores. Of course all the women were frightened.

In Rathbone's store at Milpitas, a whole long tier of shelves were nearly cleaned of a fine array of glass and crockery, and the next morning the proprietor had a fine mess to clean up, for the floor, back of the counter, was piled up with a rich mass of preserved fruits, pickles, candy, soap, mustard, brandy-peaches, pepper, tobacco, cheese, cigars, spices, essences, wines, and an endless variety of other little fixins, all in a state of conglomerated smash. The damage amounted to nearly or quite two hundred dollars. Creighton's store opposite, also suffered in the same manner to the extent of about twenty dollars. The chimneys of the blacksmith's shop were thrown down.

In San Francisco, it is usual created a great commotion in the Reassette House and other large hotels, and both women and men ran pell-mell from their rooms in their undergarments. Some day or other, a shock may come, strong enough to shake down these big five story brick buildings; a terrible loss of human life would be the result.

The Frazer river humbug has passed to be among the things that were, and of the many thousands that went thither, but few remain in that hard-favored region. All of my acquaintance who went have now returned, glad indeed to get back safe to this more genial clime, and most of them being in that embarrassing condition denominated "flat broke," have to begin the world anew. The last one returned, an old mining acquaintance, relates a most doleful experience of those diggings. "Thought the devilish river never would 'go down,’ and when it at last got as low as it ever will get, there wasn't any gold in it.” “A little in the bars, but a man couldn't make his salt there." “Went on a prospecting party way up a long ways above Fort Yale mountains, right up and down - awful rocks - no trail - no place for any - snow knee deep - half froze to death. Indians came upon them - robbed them - travelled three days with nothing to eat - got safe back to Fort Yale - sickness - starvation - mule meat and horse beef, great luxuries in that country - people selfish, hogs as a general thing - no protection for anything not English - no feeling for a human being,” &c., &c., and he winds up with cursing the Hudson's bay company and the whole British Possessions generally. From what accounts I can gather from those who have been there, the diggings are very limited in extent, comprising the distance between Fort Hope and Fort Yale, some fifteen or twenty miles. Hill's bar, Texas bar, Sailor's bar, and Emery's bar, seem to be the only localities where any gold has been found worth mentioning; and even on these bars, there were but few paying claims, and these were those that were the first found, and by means of which the whole excitement was got up. Victoria and Whatcom, those marvellous cities, that a few short months ago could count their population by tens of thousands, are now about deserted. They sprang up like mushrooms, they grew up like mushrooms, and now at last, they have dried up like mushrooms.

Last night the wind blew furiously all night, a regular hurricane from the northward. I think it must have done some damage about San Francisco. Several trees are blown down about here, and straw-piles and hay-stacks suffered considerably. It is much the hardest blow I have known of for these last three years. It has blown strongly most all day to-day, but moderated down at sunset to a decent breeze. It blew cold, and right from the tops of the Sierra Nevada, and ice formed last night three-eighths of an inch in thickness, the first I have seen this season. We rarely see it any thicker here, but I know old Plymouth ice can beat that some. 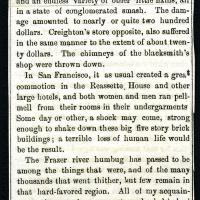