I have missed writing to you the last three mails, owing to change of location and alteration of affairs generally, making it inconvenient to keep up my correspondence; for as you may perceive by the dating of my letter, I have once more received a call to "move on," and in accordance therewith, I cast off from my old moorings near Mountain View, set sail, and have now dropped my “keelick” in a new berth. I am squatted on a little ranche of 160 acres, situated some four miles north of the city of San Jose. Milpitas is about 2 1-2 miles distant; but being the nearest post office, I date my letters from there. It is a small, country village, of two stores, post office, a blacksmith shop, two or three dwelling houses, a groggery, &c. It is situated on the main stage rode from San Jose to Oakland, and receives its principal support from the surrounding farming community.

The country hereabouts, as is the misfortune generally of Santa Clara valley, is claimed under unsettled Spanish grants, deterring the actual settlers from making any very permanent improvements, as of course, no one wishes to go on and improve a farm on an uncertainty as to whether he can hold it, and not knowing how soon he may have to vacate the premises and lose all his improvements. These dubious Spanish grants, have been, and still remain, a very serious drawback on the prosperity of the country.

On the 21st and 22d of the last month, we had the first rains of the season. They fell unusually heavy for so early, and wet the dry, hard-baked surface of the valley, to the depth of three or four inches, almost deep enough for ploughing. Since then, we have had some fine warm weather, that has caused the young grass and weeds to spring up and start growing. Already the old brown parched hill-sides, are assuming a greenish tint, and although winter is soon with us, yet it could here with propriety be called spring: for with the first rains the green grass always starts up, and in December we can commence ploughing and putting in the grain crops. We generally have about three month's ploughing season. After February is rather late for sowing grain. Many farmers are even now busy sowing grain on the old ground that was ploughed and cropped last year. For this purpose, a new machine lately introduced into this state, is eminently adapted; and although new with us, it has been very successfully operated in the older states. It is "Willard's Patent Seed-sower and Harrow.” It sows the grain, harrows it in, and a roller has been attached to it, so that it leaves the ground smooth and even, and in fine condition for a good crop. Two horses can haul it, but four can work it much easier, and one man driving with this machine can put in twelve or fifteen acres of wheat in a day.

Just below Milpitas, on the Oakland road, is a fine place for horse-racing, and for the last ten days there has been held a grand racing contest, mostly between the native Californians and the resident Chileans; although some few horses have been put into the lists by Americans and Irishmen. Some pretty tall running has been done, but the "best horse" is rather difficult to decide upon as yet, some talking largely about the "black filly,'' others "going their pile" on the ''little gray horse," while the ''sorrel mustang," has also a host of friends. Several large tents and temporary saloons, with gay flags flying are on the ground, to give the fast multitude a fair show for spending their loose change for bad liquors, cooked food, fruit, or anything else they may wish. The racing will not be over for some days longer, probably, for the Spanish population take a strong interest in the subject, and large numbers of gay dashing "caballeros," "dark-eyed senoritas," "rancheros," and "greasers" generally, congregate "thar.”

Politics is at a discount. No one "cares a cuss" for it; but in the success of the Atlantic Telegraph, of course, will Californians take a lively interest. We look upon it as another step towards that which we so earnestly desire, the Pacific Railroad. Slowly but surely, step by step we are advancing in the development of that grand idea so long projected, but not rightly carried out. Already we have established an overland mail route, and Concord coaches, carrying passengers and Uncle Sam's mail, go dashing over the snowy heights of the Sierra Nevada, across the sandy deserts and plains, through the rocky mountain passes, which ere long must shout a welcoming echo to the joyous whistle of the rushing locomotive.

Perhaps ere the close of another year, the magic wire will be sending lightning messages across the big continent, and old ancient London will be holding close conversation with her infant sister San Francisco. A stage line now, a telegraph soon, and who shall say that the great Pacific Railroad shall not quickly follow? It must! 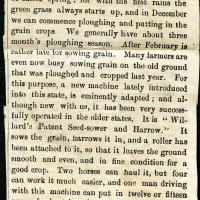