DEAR ROCK: - In my last letter I spoke of the general predisposition of the California public generally, to use spirituous liquors as a common beverage, and showed forth some of the causes which induce many to partake of the intoxicating glass, and too often, to form a habit which may eventually lead them on, in that well-beaten downward path, which endeth in misery and ruin.

There are hundreds, yes, I might say thousands, in California, who are slaves to Alcohol, and who spend all their hard-earned wages for intoxicating drink. They will not, cannot, save up their earnings; but just allowing themselves the commonest necessaries of life, all beside is spent for liquor. In the mines, such is especially the case. There are plenty of miners who work hard and steadily all the week, and on Sunday, go on a "bender."

On Spanish Gulsh, I knew one individual, a hard working, industrious man as I ever saw, who used to work steady as a mill during the week, but on Sunday he rarely failed to go to Mokelumne Hill - some six miles - on a spree. He always went to buy provisions for the coming week, and his mercantile negociations being concluded, he felt that a dram of whiskey was necessary to recuperate his system. Dram followed dram, in more and more rapid succession, until "Grizzly Bill" - as the boys used to call him, from the enormous quantity of beard on his face would become roaring drunk. Then was the time for the gamblers. Bill was always ready to try his luck at "Monte,” and a very short time sufficed to fleece him of his last dollar. Then he would become belligerent and would go round begging some one to fight him. He never had to wait long, for Sunday is the miners day for "going to town," and he generally found rough and ready ones enough. About sunset having regaled himself with all the fighting he wanted, and having invariably got whipped, he would be seen reeling off towards home, with his provisions on his back. He hardly ever reached home however, before next morning, but passed the night in the chapparal, about half way up some big hill.

Oftentimes, half a dozen or so of miners will rig up in their Sunday best, and "go to town" together. Arrived in town, of course some one stands treat, and they all have a drink together, and a cigar. To rest themselves after their walk perhaps a game of "Euchre" is found necessary; so sitting down round the table, in some store, they smoke their fragrant Havana's, and playa game or so, "for the drinks." After a while they may consider a lunch necessary, so they play for sardines, oysters, or something of that sort, and a bottle or so of wine. Before evening, some of them will get somewhat "tight," and all being more or less elated, have a jolly time on the road home.

Among the Spanish portion of the miners, too, the Sabbath is set aside, as a day of rest from all mining, and held sacred to the worship of Bacchus. On that holy day, the little Mexican villages swarm with the "miners" who come in from the surrounding diggings, each one dressed in a clean white, or calico shirt, and their peculiar style of dress pantaloons, open down the sides, showing their white under pants, and with a red sash about their waist. The "Fondas," and the "Cafes." of course are the principal points of attraction, and they do a good business in the liquor line. Along about 11 o'clock, the liquor begins to tell pretty strongly upon the heads of the drinkers, and the game of Monte is well patronized by the reckless subjects of the bottle.

A guitar, strumming about that time, has plenty of dancers to keep pace with the music, and the "Sambo quaker" is kept up with great spirit. The principal Cafe generally employs a harp, and violin on the occasion, which adds materially to its attractions. Along in the afternoon they get about drunk enough to sing, or rather we may say they get howling drunk. Knots of three or four or half a dozen of them, get together and standing in a circle, holding on to each other, they do set up some of the most doleful kind of howling, imagining themselves to be singing sentimental airs. I well recollect of one old grey-bearded greaser, that I saw singing thus, who was so completely carried away by the sentiments of the song, that he stood grasping one of his companions by the elbow, and madly gesticulating with the other hand while the big tears rolled down his dirty cheeks. Now he was a comical sight. Mexican singing I never considered to be of the first quality of vocal music, and under the circumstances which I have related, one should hear it, and view the performers, to appreciate it good.

Many there are in California, who at home stood high in the estimation of their friends, temperate, upright, and industrious, yet here in California, have been led step by step, to stray into the paths of the tempter, until at last yielding to the power of the Alcoholic Demon, ruin, despair, and death followed, and they now fill a drunkard’s grave. I have seen friends, who, when sober, were like brothers, by the cursed glass gradually alienated from each other, until their friendship terminating in some drunken brawl, they became deadly enemies.

There were those whom I loved as friends; there were those, whose only fault, I deemed to be an over-fondness for the inebriating draught. My heart bled as I saw them in the power of the Demon, and I earnestly prayed them to burst the bonds which held them; to dash aside the sparkling poison, and assert their manhood once more; but alas, the fascinations of the tempter closed their ears to friendly counsel, and blindly, recklessly, they followed the drunkard’s path, hurrying on to the drunkard's doom. - There were those too who reformed, and rising from the depths of their degradation, became once more men; and now, abstaining from all that will intoxicate, defy the power, which once held them in bondage.

Where is he, who before the blazing log fire, in the comfortable cabin, could always draw a circle of eager listeners to his well told tales of history or romance? Where is he, whose comic songs and witty sayings enlivened the long winter evenings? Where is the rough-moulded, yet good humored one, ever unmindful of his own interests in his regard for the interests of his friends, and who was so ever ready to drop pick and shovel, and take up the quarrel of his friends; aye, and fight for them too, if he thought necessary? Where are they? - On the green banks of the Calaveras, and near the turbid waters of the Mokelumne they sleep their last sleep. Untimely was their death; hastened by the cursed liquid poison; but –

"They were miners; let their faults,
Be buried in their tomb."

There are hundreds of those condemned by the power of Alcohol, to work in the mines, and there finish their miserable existence. They may dream of home and friends, but they will never leave the mines.

I have drawn no fancy picture, but one from real life. My own eyes have seen it. It is true. I have spoken of the past; but what of the future? Is California always to groan under the curse? Let us trust in God that she may not.

The people of California have too enlarged and extensive ideas of freedom, ever to submit to the tyranny of the prohibitory liquor law, but are there not many ways to win the misguided ones back to the path of rectitude? The cause of temperance has been steadily progressing of late years, until now in all the cities and towns, societies are formed, and the Order of the Sons of Temperance exists in full organization, reclaiming many from the error of their ways. Woman too making her home here, is exerting her most powerful influence towards the reclamation and regeneration of society. With those efforts, and influences, may we not hope for a brighter future for California? We may. 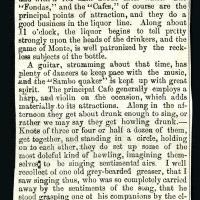