Throughout the world there is an abundance of musicians of various merit, but in the number - not quality - of musicians, I think California can take the lead. From San Francisco to Nevada you cannot find half a dozen men together but some one or more of their number can play on an instrument of some kind, if nothing but a pair of "bones." Everybody is supposed to be able to whistle except the Chinese; indeed I never saw or heard of a Chinaman that could whistle. All Yankees, of course, whistle because it is part of their nature to do so, but I would almost as soon think of seeing a pig whistle, as one of these long tailed Celestials.

All who were here in '49 and '50 can well recollect the bands of music that used to play in the numerous gambling and drinking saloons, both day and night. Some of these were fine bands too, and the music formed the principal attraction, as anyone going in to listen to the music was quite likely to patronize the bar or risk some of their loose change on a game of "Monte." These musicians were paid an "ounce" (sixteen dollars) per day, which one might suppose was pretty good wages. If that notable band that we remember of in days "lang syne," the "Calithumpians" had been here then they would have stood as good a chance as any of them and made dollars by the hatful.

On all public occasions, a bull fight or a horse race, music was indispensable, and even the funeral processions were preceded by a band performing the mournful dirge

Music of all kinds was well patronized and encouraged. From Italy's sunny clime, came the dark eyed street organist, with ever grinning and dancing images and active regimental monkey. The daughters of Germany came with extensive straw hats and blue ribbons, to charm the street audiences with tambourine and accordion, and pleasant little ballad ditties sung with their sweet German accent. And when the pretty tamborine girl would come round, holding out the tamborine so bewitchingly, "bits" and "quarters" involuntarily leaped forth, happy to claim so sweet an owner. There also came the man who perambulated the streets with big bass drum, bells, Pan pipers, triangle, &c, and who astounded the gaping crowd by performing on all these instruments of noise at one and the same time. The two had a monkey, a genius of a monkey, a discriminating monkey. That monkey could tell "bits" from buttons, and "quarters" from coppers; you couldn't humbug him. He was a business monkey, a receiving cashier and paying teller. An honest monkey that never pocketed any of the funds, for he had no pocket.

The hurdy-gurdy man, with the bird call in his mouth also pervaded the streets with his dulcet strains of grinding harmony. Throw a "bit" down to him, and hear how clear and happy the bird notes sing out from his mouth. Hear how he warbles furth his gratitude, as some one tosses him a “quarter”. And how he trills with ecxtacy as benevolence throws him half a dollar. Try him with a button, somebody.

One purple nosed individual with ambitious eyes and velveteen pants, lugs round a cumbrous article of the reed organ variety, and "Phoenix" says it only plays one tune - "The Low back car" - but in this he is mistaken, for every moonlight evening he causes it to perform "Oft in the stilly night." He commences by turning the crank slowly and gently, "can expressione," but if any money at all is thrown to him he becomes excited, and involuntarily quickens the time with a "crescendo" movement until a descending quarter increases it to a sort of gallopade quickstep, when the significant shutting of windows or closing of blinds notifies him to leave.

An improved feature in street music, however, is a company of enterprising young Germans - some half dozen of them - with white bands round their caps and they are really good performers. Each one of them carries a light music stand with three movable legs, and all play brass instruments. In front of the principal hotels and public places they halt, place their stands, open their books, and perform some of the popular airs, opera music &c in a highly creditable manner. The public appreciate their music, and they generally receive considerable pecuniary encouragement in their rounds. There are many excellent military bands, theatre bands, quadrille bands &c, and the majority of the good musicians are Germans.

The musical taste of the California public seems to run mostly on ballad singing, therefore some of the most notable opera singers meet with but little encouragement here. Ballads such as we used to hear at home seem to strike a chord in the hearts of sojourners here with peculiar fitness. "Do they miss me at home," "Old Folks at home" and such like pieces are among the most popular ballads. They are generally sung in the theatres first, and then, presented to the public, soon become very popular. Old pieces which were sung out at home, become renovated and as good as new here.

In '51 Madame Von Gulpen - German singer of considerable merit, and very pretty withal- sung "Jeanette and Jeanette" at the Adelphi theatre. She had a fine voice, and her interesting foreign accent gave to the execution of the piece an indescribable charm and it became a popular favorite directly. The merchant hummed it over at his desk, the mechanic sung it as he kept time with the strokes of saw and hammer, and the boys whistled it in the streets. A year or two ago some one sung "Be kind to the loved ones at home," in one of the theatres and although it lacked considerable of being a new piece, yet it seemed new to the public and received its due share of popularity.

Negro minstrelsy receives a goodly portion of public patronage and the "San Francisco Minstrels" have long been performing at their hall on Washington street to full houses every evening. In truth they are all excellent performers, and most deservedly popular. They sing ballads, sentimental, doleful, or humorous, and negro melodies, have plenty of music, dancing, jokes, stories, and also perform droll little plays suited to their line of acting. An evening at one of their performances is now known to be a sure cure even in the last stages of the "blues." Numerous bands of darky minstrels travel from town to town throughout the state and especially in the mining localities, and some of them realize considerable sums of money in this way.

The violin, so well called "King of instruments," the violin, which in the hands of Old Bull or Paganini breathed forth sounds soft as sighs of angels or gaily rang clear and loud in heart gladdening harmony. That instrument of greater compass and variety of tone than any other, capable of music most divine and of strains the most execrable and soul-harrowing. The violin, the "fiddle," is more performed upon and abused in the performance in California than anywhere else in the world. It claims all sorts of performers here, from creditable imitators of the great masters down to the common "Pike county" fiddler.

In the mines is the violin most especially abused. There is no lack of fiddlers there- go into any, even the most retired portions of the diggings, and you will find both fiddles, and fiddlers. Even the Chinese, although they can boast of but little talent in that line, have an occasional fiddle among them, not such an instrument as the "genus homo" generally perform upon, but a peculiar fiddle of their own getting up, which when operated upon by a Celestial fiddler, sounds are produced closely resembling the heart broken wails of a despairing tom cat.

Two years ago now, I was pretty well acquainted at "Indian Diggings" and I think that about every other man in the place was fiddler, either good, bad, or indifferent, mostly however of the latter class. One night that I was there, I tarried at the cabin of a friend. After supper several of the boys from the neighboring cabins came in and we made up quite a social little party. Pipes were smoked, stories were told, cards were played, and my friend produced his fiddle and gave us a specimen of his musical powers. He then passed it to me and another. Each one showed us what he could do at it, and I was not a little amused to find that out of a dozen of us, all except one could play, and that one wasn't me, either, for I took my turn at it too. Western fiddlers, and especially those from Missouri, tune their strings in a way that gives their music a peculiar sort of a wild yet not unpleasing sound, and all of them are sure to be able to play "The Arkansas Traveller," and "The Galan the log," two remarkable tunes which in their estimation are as much ahead of "Hail Columbia" as that is ahead of "Jim, along Josey."

*List ye now to music sweet
The hurdy gurdy’s in the street
The tambourine is loudly singing
and the organ man is singing. 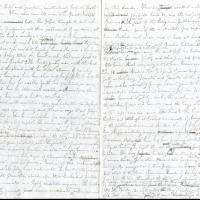