Of the numerous, and various reptiles which infest the mountain regions of California, the rattlesnake may be set down as the most dangerous, although few are the instances of anyone being bitten by them, notwithstanding the carelessness of miners and travellers, in making their camps, and sleeping on the ground where these deadly reptiles are known to abound.

In the winter season, the "rattler" is rarely seen, but in the hot dry summer months, they crawl from their holes and hiding places; and in the dry grass on the arid hill-sides, in the dry ravines, and in the chapparal, they are very frequently met with. They are generally from three to five feet in length, and I have seen them larger round than my wrist. Their color is a sort of dingy brown mottled with black, and white. When they are two years old, they have only one rattle; this is called the "button," and is of different shape from the rest; each succeeding year, another rattle appears, and thus the age of the snake is easily ascertained. The oldest and largest one I ever saw, had seventeen rattles, and was four feet ten inches in length. They are an indolent, cowardly sort of a snake, and had always rather run, than fight. I have frequently when happening to come across one, tried him, from motives of curiosity, to see how far he could spring, by poking, and stirring him up with a stick; and found that they cannot spring their length; but only so far as to conveniently drop back into the coil again, their tail not leaving the ground. They would always endeavor to get away, and I could hardly induce them to strike at the stick, although they rattled fiercely all the while. The rattle has a sharp, hissing, startling sound, and when the snake is fairly aroused and alarmed, he keeps up a vigorous rattling. At certain seasons of the year they appear to be dormant, and sleepy, so that oftentimes, a person may almost tread upon one lying coiled up in the grass, without the reptile giving the least warning. I mowed over one once with a scythe, and came near stepping directly upon him before he sprung his rattle. This was near Double Springs; and during the haying season, we used to kill at least a dozen snakes a day, of various kinds. When we were spreading the hay, mornings, under every cock of it, we would find snakes that had crawled under, during the night. They were mostly of a kind called "gopher" snakes, resembling the rattlesnake in size and appearance, but are not venomous, and are so named, from their living upon "gophers," - a sort of field mouse - rats, &c. The fangs of the rattlesnake are from a quarter, to half an inch in length; sharp as needles white and a little curved. They are situated in the upper jaw, and are movable; shutting into a sort of sheath, like the claw of a cat, and at the root of the fang, is the deadly poison. In making an attack, the snake springs forward in the coil, with open mouth, and fangs projecting, and death is the portion of the unfortunate victim. The body of the rattlesnake may be eaten with perfect impunity, as all the poison is contained in the head, and I have seen men who said they have eaten them, and they pronounced them "fine eating;" almost equal to eels. Well, a dish of fried rattlesnakes may be excellent in their way, .and perhaps hard to beat, but I cannot say that I ever felt extremely anxious to test their delectable qualities as an article of diet.

The Centipede is a sort of worm from three to six inches in length, with a great profusion of short legs. Some of these reptiles are brown, but they are mostly of a greenish color, and are found in plenty in the mining region, generally about old dead trees, in old houses, and such like places, as well as in the ground. They are said to be very poisonous, and can bury all their legs at once into a person's flesh, as each leg is a fang of itself.

The scorpion looks for all the world like a very small lobster, or crawfish in shape, and is generally from one to three inches in length. It varies in color, from green to a light brown, and its curved sting: or fang, is in the end of its tail. With its large claws it seizes upon an object, and then throwing its tail over its head, plies its sharp sting. A friend of mine once was stung in the finger by one of them, and he describes the sensation as quite painful; he at once laid the wound open with his pocket-knife, and putting the finger to his mouth, sucked out all the poison he could, and then bound a wet piece of tobacco on the wound. His finger swelled a little, but was soon well again. The scorpion is found like the centipede, in old dead timber, under rocks, and in the ground.

The Tarantula is an enormous black spider, with legs two or three inches long, and the body is as large as the end joint of one's thumb. The legs are stout, and together with the body, are covered with short grayish down or hair. They are good at jumping, when making an attack, but are generally slow and deliberate in their motions. They have a stout pair of black fangs in their head, which come together like a pair of pincers. They live in holes in the ground, and are certainly a most hideous looking object. They also, are said to be very venomous.

Of the various reptiles of which I have spoken, but few are to be found in this locality. –They belong to the mountain regions, and are the daily companion of the gold miner. It is a source of wonder, that so few get bitten by them, for they are often found inside of the miner's cabin, or tent, and even among his blankets, sometimes. All of these venomous reptiles, even to the rattlesnake, I have myself killed, inside of my own tent when in the mines. But – 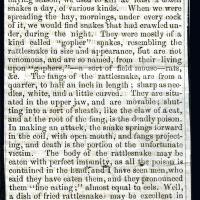