The grand Presidential campaign is ended, the forces have retired from the field, and as everybody certainly didn't expect, California has gone for "Old Buck" by a handsome majority. The mining counties all went the democratic ticket strong, owing probably to the large number of sympathizing bachelors in the mines. The foreigners too, mostly voted the democratic ticket. The election throughout the state passed off very quietly, and no riot or disturbance was anywhere created.

Now, is the "game season" in California, and the markets are filled to overflowing with geese, ducks, deer, antelope, hares, and all varieties of game, from a squirrel up to a grizzly bear. On this ranch, and all over the level bottom land near the bay, myriads of wild geese are to be seen in large flocks, sometimes of acres in extent, feeding upon the grain scattered by the last harvest. Hunters are in clover, and slaughter the geese with a perfect prodigality. They are generally found in the open fields, away from any fence, tree, or other cover for the hunter, so that it is difficult getting a shot at them, unless you take them on the wing. One pretty good method which is often practiced here, is hunting them with oxen. A hunter takes an ox trained for the purpose, and guiding him by means of a rope tied to his horns, drives him before him, following closely with gun in hand, thus using the ox as "cover," until - the geese not being afraid of an animal - the concealed hunter is enabled to approach within gunshot, when of course he improves his opportunity; double barrelled guns make great havoc among them.

In the mountains of the coast range near here, the grizzly bear is often met with. Two hunters from this place succeeded in killing one the other day, weighing between six and seven hundred pounds. About two months ago a man in hunting for some stray horses, came suddenly upon two of these ferocious beasts. They at once attacked him, dragged him from his horse and tore him with teeth and claws in a horrible manner. They ended their pastime by rolling him off a high bank down a ravine, where he laid senseless until found by some of his friends a few hours afterwards. His horse made his escape with a few scratches, and coming home riderless, the friends of the missing man started at once in search. The blundering of the bears in pushing him over the precipice was the means of saving his life; for although after being taken home, he laid for some time in a very precarious state, I believe he has since about recovered from his injuries. He certainly had a very narrow escape.

The grizzly is a dangerous individual to interfere with, but as a general thing he will let you alone, if you will let him alone, and is rarely known to attack anyone unless suddenly disturbed, as in the instance just related, or when attacked by hunters, when he will stand at bay and show good fight, or judiciously retreat, as he may think most expedient. The grizzly is a brave beast, and when forced into a fight, as in case of a "bull and bear fight," so often got up for the amusement of the public in times past, and occasionally practiced even now - he proves himself no coward, and has generally come off victorious. He is a clumsy unwieldly looking animal, but yet has the most effective sort of india rubber movement, uncomfortable to contemplate, even through the bars of a cage, and he is as quick with his fore paws, as a man is with his fists. The largest one I ever saw was at Sacramento on exhibition. He weighed fifteen hundred pounds, and is said to be the largest grizzly ever captured, although I have heard accounts of their being killed weighing upwards of two thousand pounds.

When very young the cubs are easily tamed, and make very playful pets. I have seen several of them - one especially in Stockton, which used to run about the streets just as he pleased, rolling and tumbling with the dogs. He was very rough in his play, and could tumble almost any dog in the city, so that his canine friends generally stood in fear of his sharp teeth and claws, which however he was, or at least endeavored to be, very careful in using, but one day, in playing with a big flop-eared hound, he became rather boisterous in his gambols, and at length got one of the poor dog's ears between his teeth, and neglected to let go, until the ear came off. After this exploit grizzle lost his liberty, for his master, the landlord of the Stockton House, put a chain to him, and kept him at home.

At Rich Gulsh in the Calaveras, I have often seen the grave of a young man who was actually frightened to death by grizzly bears. He had got lost in the mountains near there, and in making his way through the chapparal, came suddenly upon three large grizzlies, who pursued him until he took to a small tree, which he succeeded in climbing, and there he remained all night, just out of their reach, and they underneath shaking the tree, in their frequent attempts to climb after him, but the trunk was too small for them, as a grizzly bear cannot climb a tree that he can more than clasp around. All that long cold and dreary winter night he sat in the branches of the tree, crying and shouting for assistance, nervously watching the movements of his blood thirsty pursuers as they walked about growling, or sprang and climbed after him, at times almost reaching him. - Morning brought a large party of friends to his rescue, and the bears were driven away, but, poor fellow; wild with nervous excitement, and benumbed with the cold, he was assisted from the tree, and fainted on reaching the ground. When he was restored to consciousness he made out to walk home with his friends, but his mind wandered, and he talked incoherently in giving an account of the sad affair. Poor fellow; the terrors and expense of that awful night were too much for him; he was taken sick, and prostrated with a nervous fever. For a week he lay raving and delirious, and his heart-rending cries for help, as in his fevered imagination he still remained exposed in the fearful situation from which he was rescued, struck to the hearts of his surrounding friends. Medical aid was of no avail; he remained delirious, and during his week of sickness, his black hair gradually turned completely gray. He died. Nature could endure no longer and death came kindly to her relief. Beneath the old oaks on the hill side, they made his last resting place. The winter rains weep o'er his grave, and the bright summer flowers thickly bloom above him. There his troubled spirit finds rest, and through the autumn leaves the moaning winds sigh his requiem. 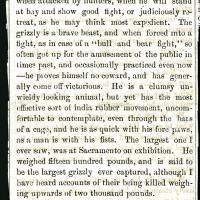