From our California Correspondent.
No. XXXVI.

The equanimity of this golden State, is at present, principally disturbed only by the Presidential election, which serves happily to divert people's minds from the sad and thrilling scenes of the last few months. The newspapers no longer teem with flowing paragraphs, and startling news of the doings of the far-famed Vigilance Committee, but all are deeply interested in the present grand Presidential contest, and even the latest news from Kansas, which has occupied a prominent position in the public attention of late, has become of secondary importance. Barbecues, mass meetings, and "speechifyings” are the order of the day, and among the various parties, the greatest enthusiasm prevails.

We have had several showers of rain lately, just enough to lay the dust for a few hours at a time; but it is rather too soon yet for the rainy season to commence. As soon as the ground is wet down deep enough by the first rains, the farmers all commence ploughing, and putting in their grain; so that by February, “seed time" is about over. Deep ploughing is found by experience, to bring the best crops, even in the very dryest locations; not that the surface is not as rich as the sub-soil, but by ploughing deep, the moisture of the earth is retained for a longer time during the scorching heat of summer, and consequently, better crops are produced. The grain crop, this last season, was not quite as good as usual, therefore grain of all kinds commands a good price at present. Wheat brings two and a half cents per pound, and has an upward tendency. Potatoes too were not so plentiful as usual this season, and now bring a high price; quite a contrast to what it was two years ago, when they were so very abundant that the markets were glutted, and in many instances they laid and rotted in the pile, or in the ground, as it would not pay to carry them to market. Indeed, in this valley, they could not be given away, as everybody had plenty of them. They now sell readily at from two to three cents per pound, and the rice ranging upward at that.

Robberies throughout the mining region seem to have much increased of late, and several notorious scamps have been arrested, some of whom were found to be escaped convicts from the State prison. Teamsters, and travellers, have been stopped and robbed on the public highways, miners have been found murdered and robbed in their own camps, and in fact organized bands of robbers are found to be conducting their nefarious trade in spite of either Judge Lynch, or the civil law. Joaquin Murieta, the celebrated mountain bandit, who so flourished in Calaveras and the adjoining counties in 1851-2, and was at last hunted down and killed by Capt. Harry Love and his party of rangers, is reported to be again alive, and at the head of another brave gang of banditti. He is said to have paid a dollar to go in and see his head, which was on exhibition at Mokelumne Hill, preserved in spirits, in a glass case; and now has the infinite presumption to assert that he "hasn't been dead at all," but has been on a visit to Mexico, from which he has just returned, to take up his old business again.

But notwithstanding all that is said to the contrary, Joaquin Murieta is most probably dead. I was in Calaveras county at the time of his bloody exploits, and when he was at last killed, and his head was exhibited, I was well acquainted with many Mexicans who knew Joaquin well, and they all testified to the identity of the head, and agreed that this renowned bandit chief was now muerte (dead.) A Mexican woman at Mokelumne Hill, who had known Joaquin intimately, from childhood up, was much affected on seeing his head, and shed tears over it. The story of his still being alive and active must have been gotten up by the lovers of the marvellous. 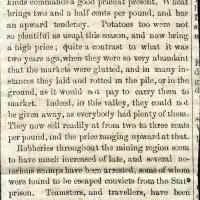