Throughout the State, the tocsin is sounding, and all parties are marshaling their forces for the coming Presidential contest. Clubs are formed, and fast forming, conventions and caucuses are held, and great speakers have commenced stumping the state. The ball is opened and the campaign has begun in earnest. Fremont, Buchanan, and Fillmore are in the field as the only recognized candidates, and as a matter of course, their various merits, and demerits are freely discussed, and their characters torn to pieces and examined into, and all their acts and misdemeanors, from boyhood up, laid before the discriminating public. The forlorn old bachelor Buchanan will receive the sympathetic votes of a very large number of the bachelors, as well as the Benedicts of California, but to judge from the signs of the times, as well as what seems to be the popular feeling, Fremont will most surely carry this state, by a good majority.

Don't call me a Bolt-er, if I do differ from you politically, and "go in" for Fremont. - The fact of it is, that us Californians, comparatively isolated as we are from the rest of civilization, wish, and have for the last six years prayed for a railroad across the Continent, on our own territory; avoiding the long, perilous, and dreary passage around Cape Horn, as well as the fevers and machetes of the mongrel-Spanish assassins of the Isthmus route. Sojourners in a distant land, our hearts have yearned towards "the loved ones at home," and we have longed for the Pacific Railroad, as the only sure, safe and speedy means of communication.

John C. Fremont has done more to develope the feasibility of the project than any other live white man, and we feel that in placing him in the Presidential chair, we secure the early completion of what we have so long needed, and most earnestly desired - the Pacific Railroad.

Our markets abound with fruit of all kinds. The finest of peaches, apples, pears, &c., seem plenty; but good fruit bears a high price, and although throughout the country thrifty young orchards are fast coming forward, it will be some years yet before we can fairly compete with the older states in this respect. Strawberries this season sold at two dollars per pound at first, but as they became plentier in the market, the price declined gradually to twenty-five cents per pound. Watermelons are always very abundant in the season of them, and as cheap as could be wished. They are a crop that seem peculiarly adapted to this climate, and require no attention to produce a superabundance.

On the road from San Francisco four weeks ago in the ranch of a friend about nine miles from the city, I saw some most enormous vegetables, in the turnip line. They were the common flat English turnip, - not Ruta Baga. - The largest one measured fourteen inches in diameter, and weighed seventeen pounds. There were a hundred or more, that would weigh ten and twelve pounds each, and from one corner of the patch, within a space of about fifty feet in length, by twenty feet in width, thirty-three hundred pounds were taken. This was about a fair average of the whole patch. Such a yield is hard to beat. This was on a light, black, sandy soil, on a hill side, and it was never manured, and never irrigated, except by the heavy fogs coming in from the Pacific Ocean.

CALIFORNIA. – It will be noticed that our California Correspondent is getting excited on the question of politics, and is deluded with the belief that Fremont is to get the electoral vote of that state. By his own statement, we do not see but that he is bound to vote for Buchanan, himself, being one of the bachelors yet, we believe, who he says are Mr. B’s only support; and as the number of bachelors in California far outnumber the married voters, we think our Bolter is “hoisted on his own petard.” He has our most unfeigned sympathy in the great disappointment that is in store for him; and has a tract from a letter received by the same mail, and dated Shasta, California, Sept. 1. 1856: --

“The presidential canvass is moving up here pretty rapidly. Buchanan will carry California by a plurality of about 10,000. Fillmore will lead Fremont handsomely, but he cannot shine with “old Buck.” Californians cannot be sold with Fremont; they know him a little too well. He represented us in the U.S. senate a little while, and did not do as well for us as a vacancy would.” 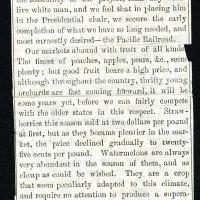