And yet again has the pistol of the assassin done its murderous work, and once more has a bloody tragedy been publicly enacted in our very midst, and in the broad light of day. Again has justice through the instrumentality of the Committee of the People been meted out to the murderer, and two more blood thirsty assassins have gone to swell the list of the victims of the hangman.

About 4 o'clock PM of the 24th ult. at the bar room of the St Nicholas Hotel on Sansom street, as Dr. Andrew Randall, an esteemed fellow citizen was registering his name in the book for that purpose, a man by the name of Hethrington stepped up to him and jerked him violently round by the beard, saying: "Damn you, I’ve got you now.” Randall drew a pistol, and they both fired at nearly the same moment. Several other shots were fired and Randall fell with his brains oozing from a bullet hole in his left temple. Hethrington was arrested at once, by some of the Vigilance Police and taken to the Committee Rooms. Dr. Randall lived till the morning of the 26th, but from the time of the shooting he remained partially paralysed, and perfectly insensible. He was about fifty years of age, of unblemished character, esteemed by all who knew him, and leaves a wife and two small children.

Hethrington was formerly from St. Louis Mo, and is the one who killed Dr. Baldwin in this city a few years ago. He shot him in the back as he was running from him but was acquitted through some of the Juggleries of the law, so often practiced in our courts, and turned loose, to seek another victim. He and Dr. Randall had previously had some difficulties together growing out of business transactions, and the Dr. had often expressed the fear that Hethrington would kill him, as he had repeatedly threatened to do so. The account of the tragedy, spread rapidly throughout the City, and considerable excitement was created, but as the assassin was in the hands of Vigilance, the people were satisfied.

About 6 o'clock in the afternoon of the 27th Joseph Hethrington and Philander Brace, were both hung by the Vigilance Committee. Brace was the murderer of Joseph West near the Mission Dolores about a year ago and has been in the hands of the Committee, under sentence for some time.

The gallows was erected in the centre of Davis street half way between Sacramento and Commercial streets. Between three and four thousand of the Committee were on duty under arms, and at the intersection of the streets loaded field pieces were planted with matches lighted and ready. Some papers estimated the crowd of spectators present at 15,000, but a correct estimate could not be arrived at. The roofs of three of the houses in the immediate vicinity were crushed in by the, weight of people on them, but luckily no one was much injured. Brace seemed determined to "die game," and while, standing on the fatal drop, he cursed and blasphemed loudly. Hethrington seemed penitent, and made a speech, in which he endeavoured to justify the crimes he had committed. He was frequently interrupted by the loud and ribald language of Brace, who at length became so obscene and blasphemous that a handkerchief was tied over his mouth to keep him quiet. When they had been suspended thirty five minutes they were cut down, and conveyed in a cart, to the Committee Rooms.

At the latest accounts from the southern coast Ned McGowan had not been taken. “He will probably effect his escape.

Judge Terry is still in the hands of the Vigilance Committee, but Hopkins, the man he stabbed, has nearly recovered, and is pronounced out of danger by his physicians. 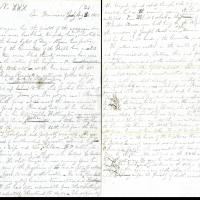