From our California Correspondent.
No. XXXIX.
San Francisco, July 20th, 1856.

Nothing of a very stirring nature, as compared with previous events, has occurred during the past fortnight to disturb the equanimity of this city's population, although the governor still proclaims us to be "in a state of insurrection." The Vigilance Committee continue the session at their Rooms, and make almost daily arrests of notorious and suspicious individuals. Some of these, after trial, are discharged again, while others are kept on hand for the next "shipment" from the State. A few days ago they arrested the notorious "Chris Lilly," who, it will be remembered, killed McCoy in a prize fight a few years ago. He has to "leave the State by to-morrow's steamer." He made no objection to this arrangement, merely asking and receiving permission and time to settle up his affairs here previous to leaving.

Judge Terry is still in the hands of the Committee and they appear to be awaiting the result of Hopkins' wound before they can decide his case. The situation of Hopkins is yet critical, and fears are still entertained by his physicians that his wound may prove fatal as within a few days he has been attacked with erysipelas which has extended itself over his neck and head. It will be some time yet before he is entirely out of danger.

On the evening of Saturday, the 12th inst., another grand mass meeting of the citizens was held in front of Montgomery block. The meeting was addressed by several prominent citizens and a petition and series of resolutions adopted, calling upon the various officers of the city and county to resign their offices, as by reason of the gross frauds which were perpetrated at the last election, through the means of ballot-box stuffing, illegal voting, false counting, filing illegal returns &c., it .is now uncertain as to whether they were really elected or not. A committee of thirty-three persons were appointed to wait upon them, express to them the feelings and desires of the meeting, and request them to resign their several offices, that another and more satisfactory election may be held or the governor appoint others to fill their places who would be more acceptable, in the opinion of the people, than are some of the present incumbents. The meeting was adjourned till Monday evening, the 14th inst., when a large and enthusiastic assemblage again met, to hear the report of the committee.

The Committee reported having presented notes to each of the officers, requesting them to resign, and from each of them they received written replies refusing to comply with the request. Some of these replies were read to the meeting. Two or three of the officials expressed their willingness to resign, providing all the rest did the same. An office in this city is a pretty lucrative and easy berth, with fat salaries and a fine chance for "stealings," therefore those holding them are averse to relinquishing such golden opportunities just merely because the "people" desire them to do so.

Several resolutions were adopted and speeches were made bearing upon the subject, and the meeting finally adjourned, subject to the call of the chairman.

A Committee of Investigation has lately been looking into the manner in which the business of the various city offices have been conducted, and their Report in the daily papers contains many astonishing revelations in the way of official corruption and embezzlement, calculated to open the eyes of the tax-payers, and shows pretty conclusively where all the money goes to.

Quite a sensation was created here on the 9th inst., by the arrival of the steamer Sea Bird from Santa Barbara, bringing the news that Ned McGowan was seen at that place on the 6th inst. He was soon recognized and an attempt made to arrest him, but he succeeded in escaping to the bushes and hills, followed by large bodies of the citizens. Up to the time of the sailing of the steamer (the 7th) he had not been captured. He was travelling on horseback down the coast towards San Diego, but becoming exhausted with his long journey, he had ventured into Santa Barbara.

A Mexican boy and an American who were with him were arrested by the Sheriff of Santa Barbara, and they stated under oath that McGowan had left San Francisco about the 23d or 25th of June, that they joined him at Santa Cruz, and that McGowan told them he was going to San Diego to buy cattle, and hired them to accompany him.

Immediately, on receipt of this intelligence, a detachment of the Vigilance Committee started in a fast-sailing schooner for Santa Barbara, but up to the present time nothing has been heard from them. McGowan, it will be recollected, was implicated with Casey in the assassination of James King of William, and the Vigilance Committee, desirous of laying hands on him, have searched high and low for him, but thus far unsuccessfully. It is to be hoped that the villain may yet be taken and have justice done him.

On the afternoon of the 18th inst., a splendid banner was presented to the Battalion Citizen's Guard, one of the companies of the Vigilance Committee, by the ladies of San Francisco. The presentation took place at Musical Hall on Bush street, in the presence of a crowded assemblage of spectators. Miss Louisa Dam, in behalf of those interested, came forward and did the honors of presentation, accompanied by the following appropriate address:

Gentlemen of the Battalion Citizen's Guard: - It is with deep emotion that I appear before you on this occasion, to present you with this Banner, as a token of the high regard in which you are held by the Ladies of San Francisco. - The work in which you are engaged is a noble one, and worthy the patriots of earlier days. - We all regret the necessity that existed in this city of calling into service this noble band. Virtue and innocence were obliged to hide themselves. The blood of the innocent has flown in our streets; justice and the rights so dear to every freeman have been trampled under foot, but the time of retribution has come. You have thus far done your duty nobly, and nothing but a true love to your country and the noble principles bequeathed us by our fathers, could have nerved you for this important crisis. Go on, gentlemen, and complete your work. May your vigilant eye, the insignia of your banner, be a terror to evil doers; and may you long live to enjoy the blessings of a pure government in this city and State, and you shall ever have the hearty co-operation of every true woman.

Lieutenant Col. Olney replied to this in a neat and suitable speech. The American Brass Band were in attendance and performed several soul-stirring airs suited to the occasion. A Quartette Club mounted the stage and sung the "Star Spangled Banner," with appropriate verses, and a very interesting address was delivered by Capt. S. T. Thompson, a member of the Executive Committee, referring to the circumstances which produced and called forth the powerful Vigilance organization, and setting forth the beneficial and happy results which have thus far followed the action of the Committee. More music and singing closed the exercises of this interesting occasion.

The Banner is wrought of a beautiful article of blue satin, bordered with a heavy silk fringe. It is about eight feet square, and supported by the usual flagstaff. On one side is an excellently painted eye of Vigilance and this inscription: "Battalion Citizens' Guard, organized May 18, 1856;" also the motto of "Nunquam Dormio." The other side bears the following inscription: "Presented by the Ladies of San Francisco, to the Battalion Citizens' Guard, (V. C.,) July 18th, 1856."

Since the arrival of the mail steamer on the 14th inst., numerous and noisy "ratification meetings" have been held, big guns fired, fireworks exploded, and tar barrels burnt, the various political parties here heartily endorsing the Presidential nominations of the Conventions on your side of the Continent. Last evening the Republicans held a grand ratification meeting, and the thundering of two hundred guns, together with speeches and other "doings," signalized their acceptance of Col. John C. Fremont for the Presidency.

The political party most desirous of securing the vote of the State should bear in mind that the immediate construction of the Pacific Railroad is the item of interest to all Californians. The Republican party has been very judicious in that respect, as well as in the nomination of Fremont for the Presidency. Mrs. Julia Dean Hayne is just completing a successful engagement at the Metropolitan theatre, and receives a complimentary benefit tomorrow (Monday) evening.

Considerable showers of rain fell in the mining region on the 4th, a remarkable occurrence never before known here, within the memory of the "oldest inhabitant." 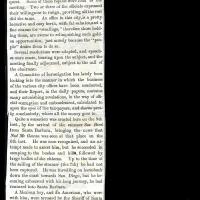